Anegada “pushing for bigger and better things” after Irma

This article originally appeared in the Beacon’s Sept. 6 “Irma Anniversary” edition. For the some 300 people living on Anegada, day-to-day life is punctuated by boat arrivals. Road Town-based passenger ferries pull …

END_OF_DOCUMENT_TOKEN_TO_BE_REPLACED 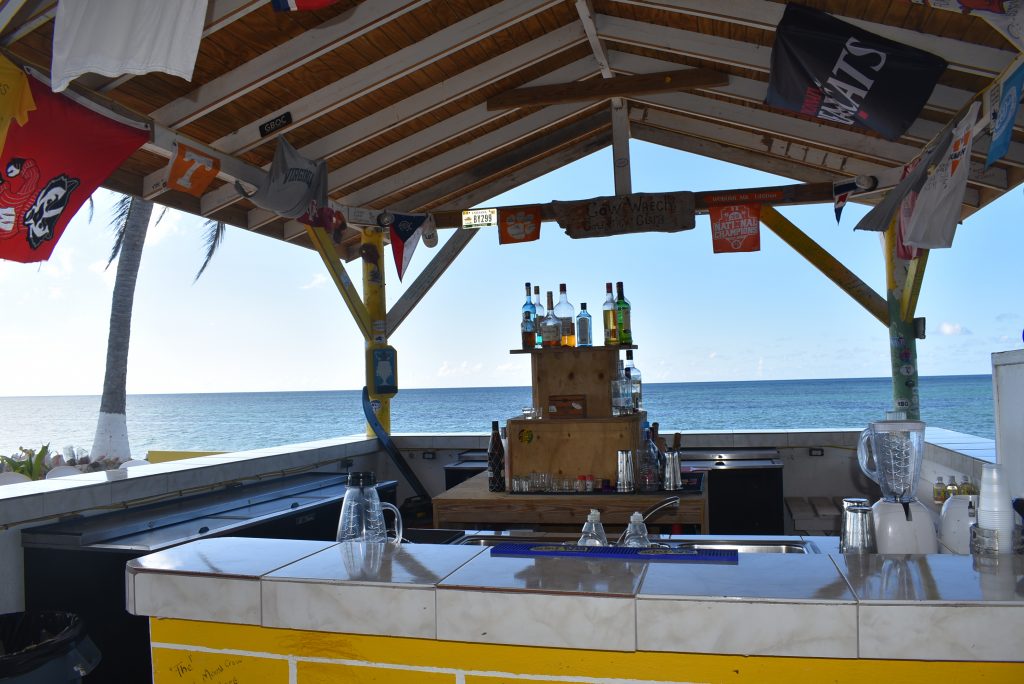 Cow Wreck Beach Bar lost its roof during Hurricane Irma but was fixed up in time for Lobster Festival that November. (Photo: CONOR KING DEVITT)

For the some 300 people living on Anegada, day-to-day life is punctuated by boat arrivals.

And — especially in the year since Hurricane Irma — catamarans sail in throughout the week, carrying tourists eager to spend more time on a Caribbean island that, when compared to other parts of the territory, seems less defined by the scars of an ongoing disaster recovery effort.

Anegada residents scoff at the idea that the “storm missed them.” Most business owners suffered serious damages, and fishermen lost boats and traps. Several Anegadeans also saw their homes destroyed, and visible storm damage still dominates pockets of the island.

But few seem to dwell too long on that. Anegada’s wide-open spaces offer easy escape from unsightly storm debris. Businesses are open and largely doing well. Most residents live with electricity, roofs and running water. And tourists, on average, are staying longer and spending more money.

Talk to many Anegadeans, and they’ll describe an existence that is — or is well on its way to becoming — relatively ordinary.

“I’m good. The house isn’t finished, but I can live in it,” said Bellanseta Creque, who co-owns Cow Wreck Beach Bar with her husband Wendell. “If you didn’t see the little hiccups, life would be normal, but there’s always those little hiccups.”

Irma took the roofs off Ms. Creque’s home and business. It’s her only source of income, so she pushed forward with repairs and fixed up Cow Wreck before last November’s Lobster Festival. Being open for the 2017/2018 season paid off, she explained, as most visiting boaters — bereft of the usual number of tourist options — apportioned more of their time to Anegada.

“For the most part, I would say as bad as Hurricane Irma was it still came with a blessing for Anegada in a way, because I would say through the lack of accommodations on Tortola, and places to stay, we reaped a little bit benefit out of it,” said Ceon Levons, manager of The Big Bamboo restaurant and villas. “Like, for example, guests that would come here one day and leave the next morning, we would probably get them staying for two, three nights [now].”

Mr. Levons was optimistic despite facing his own personal difficulties in the past 12 months, including losing his father Aubrey, a businessman and well-known fixture in the Anegada community. Prior to his death in November, the elder Mr. Levons had operated Big Bamboo in its current location for nearly three and a half decades.

Though he died about two months after the storm, the younger Mr. Levons attributes his father’s death to the strain caused by Irma.

“On another level, the hurricane made him see things that he’d never seen in all his life here in terms of certain trees that been through many hurricanes and never broke, broke — all of his lime trees in the yard that used to bear fresh limes,” he explained. “The after-stress.”

Still, the younger Mr. Levons and his mother, Diane, managed to finish bringing the business back to where it was before the storm, and they are now operating their restaurant, four villas and a gift shop, as well as employing a full staff.

And although they still deal with day-to-day challenges — like massive amounts of sargassum at Loblolly Bay and the occasional stretches of slow business due to bad weather — the mother-son team plans to expand their operations for next season, establishing water sports like beach volleyball and kayaking.

Other hotel and restaurant properties, however, are struggling to get by.

Mark Soares, who owns Neptune’s Treasure with his wife Pam, had to shut his hotel down until January to allow time for repairs. During the storm they lost the roof of their restaurant, as well about 200 coconut palms, and suffered damage to their home on the property.

And despite reopening nearly eight months ago, they haven’t managed to regain much of their lost business.

“There’s been a substantial amount of boats [around Anegada] but, percentage-wise, overall, on a scale of one to 100 percent, the amount of people that have come down here for dinners and so forth were probably 10 percent,” Mr. Soares said. “Numbers have been very, very low.”

The hotel and restaurant owner doesn’t completely attribute that to post-storm cancellations, however: People from other properties along Anegada’s southern coast consistently ride out to anchoring boaters in dinghies and advertise their establishments while spreading false rumours about his place, he said.

“I think that is totally wrong,” Mr. Soares said. “The guests coming in here should be able to make up their own minds when they come ashore where they want to eat. I have no problem with someone handing out information on their place, … but don’t spread false tales about other places.”

The owner said he has been working hard trying to raise revenue in other ways, like marketing breakfasts and happy hours, but the lack of customers coupled with raised insurance premiums and a settlement that didn’t cover the full cost of damages have made business a struggle.

“I find that the Tourist Board went above and beyond pushing Anegada as a destination,” Mr. Soares said.

As is common for members of small, tight-knit communities around the globe, residents of the isolated sister island are often prone to canonising their immediate history. Anegadeans love their heroes.

Throughout The Settlement, people spoke highly of Shirley Vanterpool, the island’s district officer who helped coordinate the shelter at Claudia Creque Educational Centre; Nathan White, the firefighter who helped distribute goods; and Mitch Vanterpool, the BVI Electricity Corporation senior linesman who oversaw the rebuild of the territory’s electrical grid.

Thanks largely to the efforts from Mr. Vanterpool and other Anegada BVIEC employees, as well as a temporary team of linesmen from Grenada, Anegada — which is on its own electrical grid — restored its power much faster than other parts of the territory. By last October, one month after the storm, 80 percent of the island already had current, and the remaining parts of the island followed shortly.

That progress was hard-earned: They didn’t have a bucket truck and spent a lot of time clambering up surviving poles to remove galvanised sheets and other debris.

“Initially it was hectic, but after the second day or third day it was like normal,” Mr. Vanterpool said. “We sweat a lot, we work hard. We go to bed 10, 11 at night, get up. By 7 o’clock, you out on the road again. [It was that way] for the first six weeks or so. I enjoyed it.”

After the storm, the linesman warned other members of the community not to cut fallen wires — something that saved them a lot of time.

Materials were bound to be an issue, he knew, and preserving as much wire as possible would help them rebuild faster.

Now, the island is looking to future options for power like solar, according to Daniel Vanterpool, the Anegada power station supervisor and shift controller.

Other BVIEC workers had visited the island multiple times in 2018, completing surveys for that purpose, he explained.

“The solar will take of the strain of having to replace generators and generators,” Daniel Vanterpool explained.

Other infrastructural elements like water distribution and the communications network have also recovered well, the station supervisor added.

In 2018, the island also benefitted from a new ferry service, the Anegada Express, funded without government assistance by Doug Riegels, the owner of the Anegada Beach Club.

Travelling between Setting Point, Virgin Gorda and Trellis Bay, the Anegada Express runs on Tuesdays, Thursdays, Saturdays and Sundays, though Mr. Riegels noted it will be cranked back up to its twice-daily schedule by the Lobster Festival in November.

Multiple Anegada proprietors said the ferry — which was shut down for most of August due to mechanical issues — increased the number of travellers from within the VI and also made it easier for guests coming into the Terrance B. Lettsome International Airport on Beef Island, just a short walk away from Trellis Bay.

Though he has “zero hope” of profiting off the ferry as a solo enterprise, Mr. Riegels noted that it makes sense for his resort, which he estimated was operating with about 80 percent of its pre-Irma level of luxury tents and 40 percent of its hotel rooms.

Despite its smaller capacity, the resort has slightly increased its staff to nearly 40 people across both ABC and Lobster Trap, he added.

“Anegada on a whole is the one island out of all the islands that is doing well,” the ABC owner said, adding, “It’s much more on the map.”

In the future, Mr. Riegels said he also plans for the ferry to operate as a medical boat for Anegada in case of emergencies.

One Anegada resident, Soldier Debique, a construction worker, called on government to do even more to help the isolated islands in the case of medical emergencies

“If they could … keep a plane or a chopper on Anegada base all the time for that, that would be very good,” he said. “Because you never know what will pop up.”

Some fishermen on Anegada complained that a lot of the fish had disappeared after the storm.

“You gotta go further out to fish and things because the reef — the hurricane really root up the reef and things here,” said Nigel Jarvis, who lives on and fishes off Anegada. “Until the reef come back, the fish ain’t come back.”

Some fishermen went to St. Thomas and Tortola while the fishing hauls were light, according to Mr. Jarvis, who had to get a temporary boat because his pre-storm vessel was damaged.

Other people across the island, however, said the lobster and conch hauls had been strong and able to sustain the demand from residents and tourists.

On a Friday afternoon in late August, Mitch Vanterpool sat outside a store in The Settlement, fiddling with a streetlight he planned to put on a service pole later. A small team of Tortola BVIEC employees was on Anegada with a bucket truck to help reestablish the street lighting, which Mr. Vanterpool hoped to finish within the month.

The linesman lamented the storm damage done to a restaurant and bar he was building east of Setting Point before the hurricane — some $20,000 worth, he estimated. Still, he hoped to get the bar running by November and the kitchen by December or January.

This reporter then asked what made that third category better.

“Drinking rum,” he responded, laughing. “Shooting the breeze with the boys.”