While adults sipped mulled wine and snacked on minced pies, children lined up to meet Santa Claus on Friday night at Nanny Cay, where members of the Humane Society of …

END_OF_DOCUMENT_TOKEN_TO_BE_REPLACED 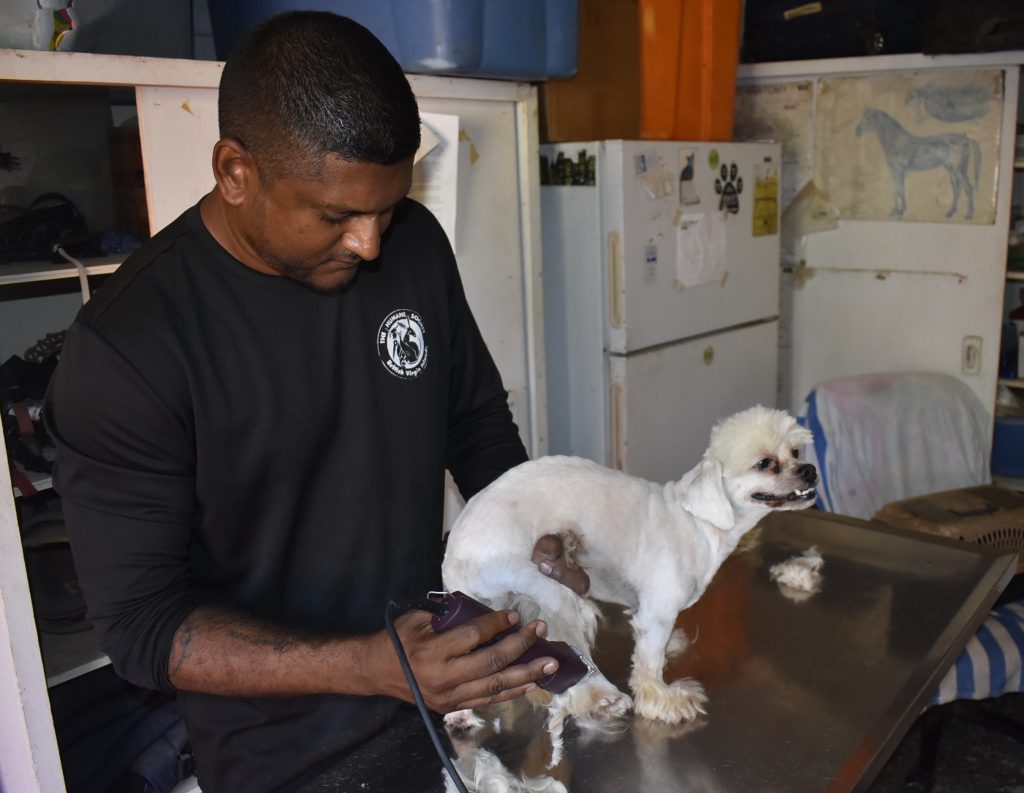 Animal shelter manager Vijay Bissoondutt trims a dog at the facility in Johnsons Ghut. If he and other staff members are unable to negotiate for an extended stay in the shelter’s current location until the funds for a new compound are collected, the facility’s 95 dogs and 35 cats could become homeless. (Photo: JOEY WALDINGER)

While adults sipped mulled wine and snacked on minced pies, children lined up to meet Santa Claus on Friday night at Nanny Cay, where members of the Humane Society of the BVI set up shop to raise money for a new home for sheltered animals.

The current Johnsons Ghut shelter — which houses 95 dogs, 35 cats, four tortoises, three rabbits and five birds — is located on privately owned land, and the humane society has been asked to vacate the area by Dec. 31 so that the landlord can develop the property, said shelter manager Vijay Bissoondutt.

There is currently nowhere else for the society to keep its critters, he added.

“The shelter’s been really good for the community,” he said, adding, “Closing the doors is going to be a big impact.”

To avoid shuttering the shelter, Mr. Bissoondutt’s only option is to speak to the property owner and ask for an extension while the organisation raises funds to build a new facility, he said.

“I have to meet with her and see if we can stay longer,” Mr. Bissoondutt said of his landlord, Theresa Shirley-Frett.  “We’re gonna raise the money. It’s gonna come.”

Prior to Hurricane Irma, the Humane Society intended to relocate the shelter to a site it had purchased in Josiahs Bay, Mr. Bissoondutt said.

The storm’s passage delayed construction of the new building, and Ms. Shirley-Frett — who could not be reached for comment — allowed the shelter to remain in its old spot.

By explaining to her the shelter’s importance and the fundraisers’ progress, Mr. Bissoondutt hopes that she will again grant an extension, during which time they can amass the necessary funds to build the new facility, he said.

“I’m sure she will be generous enough to give us more time,” Mr. Bissoondutt said.

Given the support Ms. Shirley-Frett and her family have shown to the humane society in the past, board member Els Kraaken is similarly confident that they will be allowed to temporarily remain in the shelter, she said.

If the society is forced to close its doors on Jan. 1, members will use the funds to begin moving the animals out of the territory, Ms. Kraaken said.

“In no way, shape or form are we going to kill those dogs and cats,” she said.

Ms. Kraaken sent a letter to the Frett family on Sunday requesting to speak with family members about the situation, and as of Tuesday she was waiting to hear back, she said.

With the Dec. 31 deadline looming, Alexia Lucas, a friend of several Humane Society board members, set up a GoFundMe account on Nov. 4 to collect donations for the new shelter.

Initially, organisers set a fundraising goal of $150,000, but a contractor who recently toured the land in Josiahs Bay estimated that costs are closer to $450,000, Mr. Bissoondutt said.

After recently receiving a $25,000 cheque from Roger Harris of Nanny Cay, the society has raised roughly $100,000, Ms. Kraaken said.

People frequently come by the shelter with a cash or cheque donation, while others hand over their contributions when passing staff members in the street, Mr. Bissoondutt said.

And occasionally, as with Mr. Harris, the donations can be rather large, Mr. Bissoondutt said.

“People come through the door and say, ‘Here’s a $200 donation towards the building; … here’s a cheque for $500 towards the shelter,” he explained.

Regardless of how the money is collected, Mr. Bissoondutt is touched to see so much support from here and abroad.

“It feels amazing to see that people actually agree with what we do and want to see the shelter move forward,” he said.

Natasha Ruscheinski, founder of Promoting Animal Welfare BVI, a non-profit organisation that spays and neuters cats and dogs for people who cannot afford to do so themselves, said that she is not surprised by the public’s generosity.

“We’ve got a lot of animal lovers in the BVI,” said Ms. Ruscheinksi, who also lauded the many tourists who donate to animal-related causes in the Virgin Islands.

“You still see a lot of unwanted animals … that need a place where they get cared for,” Ms. Ruscheinski said.