The $12,000 raised by the BVI Humane Society on Saturday morning is going back directly into the day-to-day running costs of its animal shelter in Johnsons Ghut. Forty-nine four-legged contestants …

END_OF_DOCUMENT_TOKEN_TO_BE_REPLACED 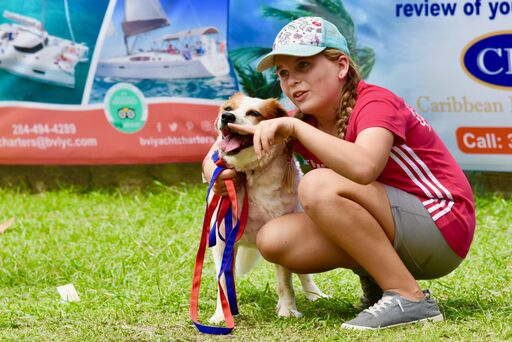 Zara Pascoe and her dog Bella prepare for one of the 14 competitions during the show. (Photo: GREG ROBINSON)

The $12,000 raised by the BVI Humane Society on Saturday morning is going back directly into the day-to-day running costs of its animal shelter in Johnsons Ghut.

Forty-nine four-legged contestants entered the shelter’s annual Dog Show at Captain Mulligan’s, teaming up with their handlers and owners to show off their tricks.

The show began at 1 p.m. and included 14 competitions with seven “fun” categories and seven “official” categories. Organisers said more than 350 people attended the event, which has been running since the shelter’s inception in 1975.

“It was a successful one,” said Amanda McKenna, a society board member. “Having it at Mulligan’s was good because they have a lot of room … for the vendors and tents.”

The Humane Society set up a prosecco tent where volunteers sold custom-made wine glasses and refills, with all proceeds going back into the organisation. The show also included vendors, a raffle, a car boot sale, a silent auction and a bouncy castle.

Prior to the event, the Humane Society brought in a dog trainer from Puerto Rico and offered classes for five days, where about 15 dogs prepared for the show.

Additionally, this year the show was held in a big rink where businesses were able to purchase banner advertising. The Humane Society also launched an apparel store, where hats and t-shirts were for sale.

“It’s a fun family day and we want everyone to enjoy it, but obviously we need to raise funds for the organisation,” Ms. McKenna said. “Every single fundraiser we do goes back into the shelter.”

And right now, it needs all the help it can get.

The shelter is currently at maximum occupancy with about 67 adult dogs, 14 cats, 19 puppies, six parrots, four tortoises, and one goat.

Educating the public on the importance of spaying and neutering pets is another component of the organisation’s work.

The Humane Society partners with Protecting Animal Welfare BVI, a separate organisation dedicated to spaying and neutering animals, which allows the society to spay and neuter animals each week without charge.

“To try to relieve the pressure in the shelter, [PAW BVI] puts puppies and kittens into foster care. That’s better for a puppy or kitten … just to get used to people,” Ms. McKenna said.

The non-profit first opened its doors in 1975 in Pasea Estate with the intention of caring for animals, especially stray cats and dogs.

The original facilities included a yard for stray dogs, several kennels for boarding dogs, cat cages, and a small veterinary clinic. A decade later, the Humane Society moved to its current location in Johnsons Ghut. It was an upgrade in facilities that brought larger spaces and an increase in ability to care not only for dogs and cats, but more animals.

The organisation was ready to move yet again after purchasing an acre of land in Josiahs Bay in 2015, but the groundbreaking was halted by Hurricane Irma.

The hurricane also stripped away much of the structure at Johnsons Ghut, but thanks to the help of volunteers it has continued to function.

Renovations have recently finished and the public is encouraged to visit.

While the society’s popular gaming night returned this year and raised more than $50,000 for the shelter, it still needs more help.

The organisation relies on volunteers to feed, walk, wash and spend time with the animals.

“We’re always looking for volunteers,” Ms. McKenna said. “To be honest you can never have enough volunteers.”

She encouraged residents to give what they can, even if it’s as little as an hour every two weeks. Every little bit helps, she said.

Anyone looking to adopt a pet can visit the animals and then sit down with shelter manager Vijay Bissoondutt to discuss possibilities.