Another contract signed for admin building

Repair work will accelerate at the Ralph T. O’Neal Administration Complex following the signing of a contract to install impact-resistant windows and doors, officials said last week, adding that plans …

END_OF_DOCUMENT_TOKEN_TO_BE_REPLACED 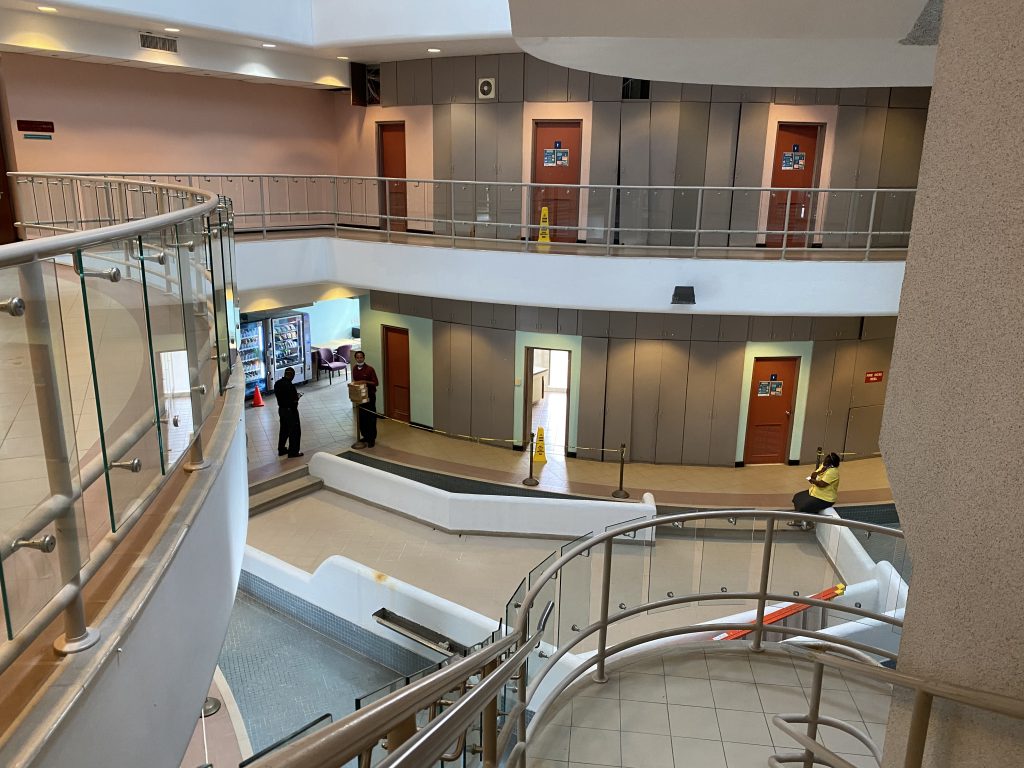 Repair work will accelerate at the Ralph T. O’Neal Administration Complex following the signing of a contract to install impact-resistant windows and doors, officials said last week, adding that plans also include constructing an underground parking lot and handing out several small contracts to demolish old offices at the building.

On Aug. 11, government signed the $2,092,038 contract with DesignBVI, according to Transportation, Works and Utilities Minister Kye Rymer.

The signing was broadcast on the government’s Facebook page, but media weren’t invited to attend.

The contract was awarded on Feb. 12, though negotiations subsequently brought the price tag down by more than $200,000, according to the minister.

The planned window repairs “will represent a substantial improvement on the appearance of the administration complex and progress of the works to restore and upgrade this facility,” Mr. Rymer said in an Aug. 11 statement.

However, he said work likely will not begin until December because of the liability associated with peak hurricane season. He did not state an anticipated end date.

He added that the damage caused by the 2017 hurricanes was extensive.

“Many of the glass doors and windows were either blown in or damaged severely, and the contents within the office spaces thrown about,” he said.

While repairs were awaited, much of the building was boarded up to protect office spaces and personnel from the elements, he said.

“Despite these efforts to temporarily secure the complex, there is a great need to remove and replace all temporary plywood barriers and damaged glass to restore and upgrade all external windows and doors.”

Mr. Rymer said the Covid-19 pandemic presented additional challenges, but work is progressing on the repairs.

Premier Andrew Fahie said government is “fixing the building once and for all, bearing in mind that no significant repairs were attempted” since 2017.

“We believed then and still today public officers and the public deserve to work, conduct business and provide quality services in an environment that is reasonably comfortable and, most of all, safe,” Mr. Fahie said.

TWU Permanent Secretary Ronald Smith-Berkeley said government is in the process of emptying the building, with only four departments still needing to move out. One plans to shift in the next week or so, and the other three should depart by October, he added.

In November, Mr. Rymer announced that the window and door tender had been issued and that he hoped to award a contract by the end of 2019, though he did not include an update on these works in the following House of Assembly session.

Last week, he said government also plans to soon issue “several small contracts for the demolition of the various office spaces and rooms” at the complex.

Tender documents for the construction of an underground parking lot and new elevator shaft on the west atrium also will be issued soon, he added.

He promised that his ministry is working to ensure construction is completed under budget and in a timely manner.

Power repairs are also in the works. Mr. Rymer said the government signed a contract to purchase a new automatic transfer switch to regulate the building’s power supply, and efforts are under way to obtain a replacement generator.

The building was renamed from the Central Administration Building in November. At the time, Mr. Rymer announced that works to restore the building had commenced, and he took responsibility from Deputy Governor David Archer Jr. for project management following a Cabinet decision.

After taking over the project, Mr. Rymer set out to remove the remnants of the old roof so that works on the new one could begin; rid the basement of contaminated materials; salvage as many files as possible; and begin the process of relocating employees.

Government signed a $1.3 million contract in November 2019 with Kishor Karnani, director of Professional Roofing, to replace the roofing membrane. The same month, a $380,600 contract to replace the skylight was awarded to Western Glass Suppliers.

At the time, Mr. Rymer said he hoped to have the roofing work finished by the end of 2019. In a March 12 update, he said the roof was watertight since the company replaced 98 percent of the membrane. The installation, he added, needed to be certified before the project could be accepted as complete, with a 25-year warranty.

Last week, he said that works are ongoing on repairing the skylights and installing lightning protection.

Mr. Rymer also said last week that government recently signed a one-year insurance contract for the complex, covering the contractor’s risk, public liability and “perils such as hurricanes, floods and earthquakes.” He did not specify how much the contract cost.

One exception was the significantly damaged administration building. Government received a $11.4 million insurance payout for the damage.

Government sent out a tender invitation in May 2017 asking for bids on insurance coverage for the building, which was valued at $32 million in the notice.