Arbitrators aim for balance amid sanctions

With more than $400 million of assets in the Virgin Islands frozen in the wake of sanctions related to the Russian invasion of Ukraine, even many unsanctioned Russians are finding …

END_OF_DOCUMENT_TOKEN_TO_BE_REPLACED 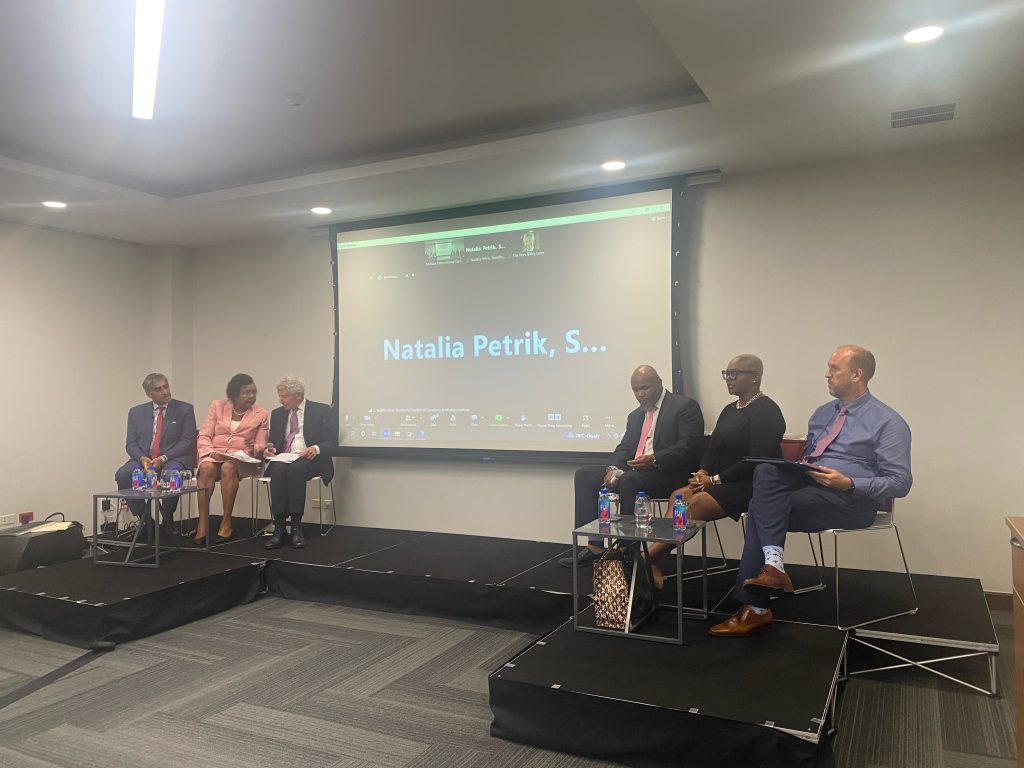 King’s Counsel Khawar Qureshi, head of the London- and Qatar-based law firm McNair International, addressed an in-person and virtual audience at the BVI International Arbitration Centre on Monday during a programme themed “Practical Implications of Sanctions on Litigation and Arbitration.” (Photo: PROVIDED)

With more than $400 million of assets in the Virgin Islands frozen in the wake of sanctions related to the Russian invasion of Ukraine, even many unsanctioned Russians are finding it difficult to access funds and to pay for justice proceedings, speakers said during a programme held Monday at the BVI International Arbitration Centre.

To address the problem, panelists discussed how institutions including the BVIIAC can help such clients access arbitration and litigation.

The Governor’s Office announced in May that since Russia invaded Ukraine, the VI had frozen more than $400 million in assets as required by its obligations under the United Kingdom’s Russia (Sanctions) (Overseas Territories) Order 2020.

The keynote speaker in Monday’s programme — King’s Counsel Khawar Qureshi, head of the London- and Qatar-based law firm McNair International — addressed an in-person and virtual audience made up mostly of VI legal practitioners.

The programme — which was themed, “Practical Implications of Sanctions on Litigation and Arbitration” — was organised by Barry Leon, an independent arbitrator with Caribbean Arbitrators, and VI King’s Counsel Dancia Penn.

Mr. Qureshi — a veteran of commercial disputes across multiple jurisdictions — said that soon after the implementation of the sanctions, “very major firms decided that they were going to abandon clients, whether designated or not, solely on the basis that they were Russian nationals.”

This occurred both in the UK and the VI, he said.

That might be troubling for practitioners who want to ensure access to justice, he said, adding that “it may well not send a particularly positive signal about the availability of legal services” in the VI and elsewhere. However, he asserted, it’s not up to lawyers to decide who deserves justice. As the Nuremberg and Tokyo tribunals and the International Criminal Tribunal for Yugoslavia proved, he said, “No matter how heinous the crime is, it’s not for us as lawyers to withdraw representation because we’re making moral judgments. Obviously, that’s subject to ethical and professional requirements.”

Furthermore, he pointed out that many unsanctioned Russian nationals are finding that their banks are “extremely reluctant to give them access to funding even if a licence is obtained.”

Similarly, he added, “It may be that a bank refuses to take money in the face of a licence.”

When seeking arbitration or litigation, clients may also have trouble accessing funds or third-party funding for filing fees, all due to sanctions, the lawyer explained. They may also run into issues accessing professional services, he added.

“How on earth are litigants to be able to commence proceedings if they can’t pay the filing fee?” he asked.

However, Mr. Qureshi said, the European Union and other jurisdictions have taken steps to address such issues. These measures include an EU “carve-out” since July for transactions that are “strictly necessary to ensure access to judicial administrative arbitral proceedings, as well as for the recognition and enforcement of a judgment or an arbitral award rendered to the member states,” he explained.

The carve-out can be granted so long as the purpose is consistent with the objectives of the regulations surrounding the Ukraine war, he said.

A general licence also “might be an effective means to address the delay in obtaining clearance from the regulators,” he said. “We’ve had the [UK] Office of Financial Sanctions Implementation general licence as of the 17th of October, which provides for arbitration fees to be paid and arbitration costs as defined. That’s extremely helpful.”

In addition, he added, the London Court of International Arbitration has been granted a general licence by the UK Office of Financial Sanctions Implementation, allowing it to process payments from sanctioned parties to help them cover their arbitration costs.

Governor John Rankin also spoke at the event, advising that special licences for ensuring access to funds are available to VI practitioners through his office.

He also warned practitioners that it is their “duty to ensure that your clients and your companies are complying with sanctions.”

Mr. Rankin added that practitioners have “a duty to report to the Governor’s Office if you know or have reasonable cause to suspect that you are in possession of, in control of, or otherwise dealing with, funds or economic resources owned, held or controlled by a designated person.”

However, he said, “Of course you also can apply for a licence if you’re carrying out certain activities, which will involve the making of funds or other assets available for the benefit of designated persons or entities.”

His office will also deal with those applications, he said.

Ultimately, according to Mr. Qureshi, there is “a very difficult balance that has to be struck, but an important balance, nevertheless, between ensuring that sanctions are effective and [providing] access to justice.”