Local News > Archives in jeopardy as law remains in limbo

Archives in jeopardy as law remains in limbo

In 2010, legislators passed a law designed to help preserve the territory’s valuable records. Eight years later, it still is not in effect. As a result, some preservation efforts have …

END_OF_DOCUMENT_TOKEN_TO_BE_REPLACED 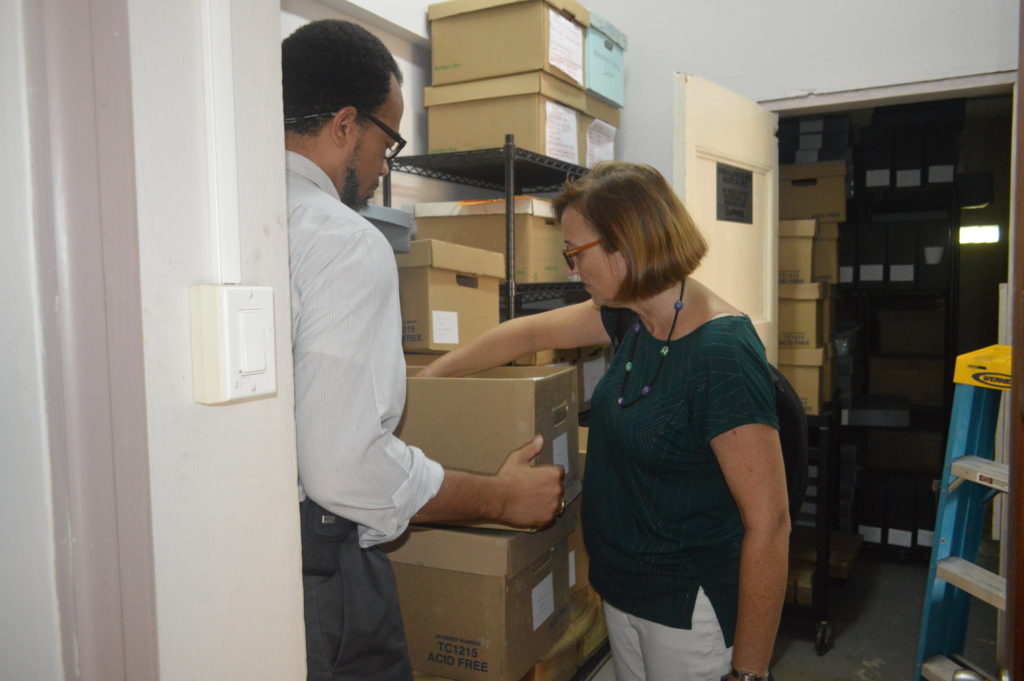 Valerie Martens-Monier, an archivist from Curacao, examined documents in the Old Administration Building when she visited in April. (Photo: CLAIRE SHEFCHIK)

In 2010, legislators passed a law designed to help preserve the territory’s valuable records.

Eight years later, it still is not in effect.

As a result, some preservation efforts have stalled, Deputy Governor’s Office Permanent Secretary Carolyn Stoutt-Igwe told legislators during the recent deliberations of the Standing Finance Committee.

However, no minister has been assigned this responsibility by the premier, she said, urging that this step be taken soon.

Otherwise, she added, she would recommend that the act be amended so that the unit can be placed under the Governor’s Group.

Ms. Stoutt-Igwe also stressed the urgent need for the act because the hurricanes last year “highlighted the need for the government’s records to be safe-guarded,” and because “the government has lost a lot of documents that cannot be replaced,” the report paraphrased.

Ms. Stoutt-Igwe also noted that the archives unit had been able to retrieve some files electronically, but there had been challenges with some of the machines used to store them.

Other government departments also lost records. To help recover them, she said, more scanners would be needed.

It remains unclear whether the unit will be under the Governor’s Group, or be placed under the Premier’s Office or the Ministry of Finance.

Asked by Health and Social Development Ronnie Skelton why the unit could not be placed under the Ministry of Education and Culture, Ms. Stoutt-Igwe explained that officials “wanted to have a distinction between the role of the library and the role of the archives unit,” the report paraphrased.

Mr. Skelton added that any unit not assigned to a ministry falls under the premier.

Ms. Stoutt-Igwe agreed. However, she added that she has written to Premier Dr. Orlando Smith requesting to officially relocate the Archives Unit, and that the unit “needs a sense of belonging.”

Attempts to reach Dr. Smith, who is travelling in Asia, were not immediately successful.