A visiting archivist made recommendations last Thursday for coping with the “huge amount of destruction” she saw as she surveyed archives throughout the Virgin Islands, and suggested to caretakers how …

END_OF_DOCUMENT_TOKEN_TO_BE_REPLACED 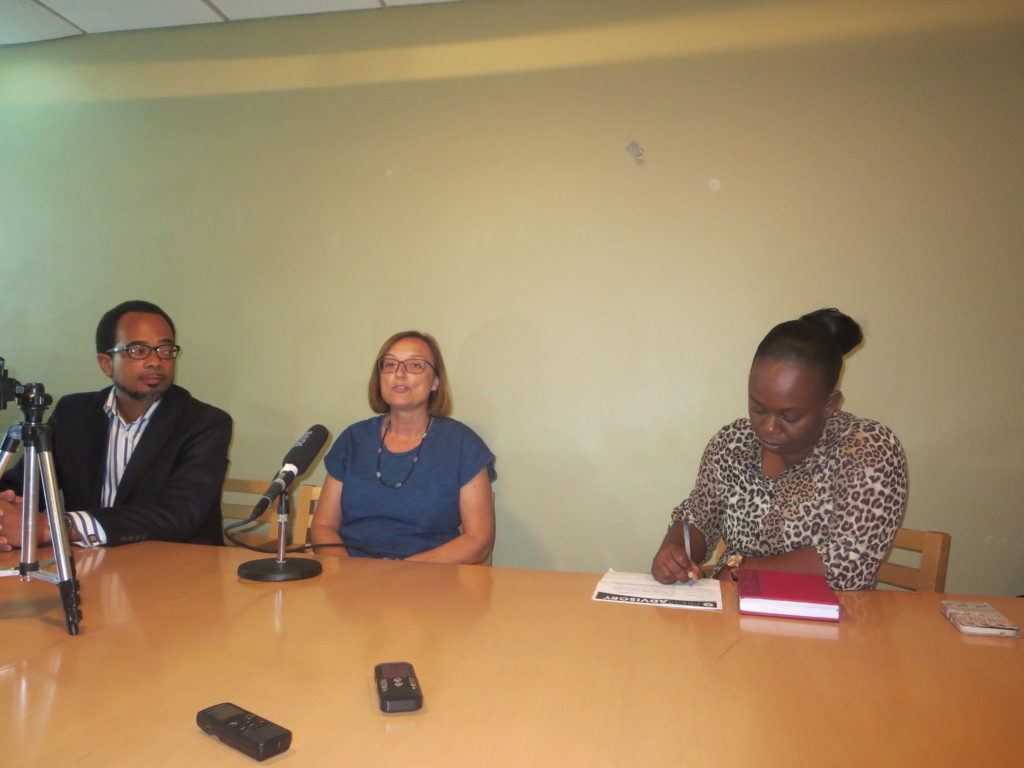 A visiting archivist made recommendations last Thursday for coping with the “huge amount of destruction” she saw as she surveyed archives throughout the Virgin Islands, and suggested to caretakers how they might recover and mitigate further damage.

“You need a national repository, be it national archives and maybe a national library,” said Valerie Martens-Monier, head of conservation at the Curacao National Archives.

But in the meantime, she also recommended boxes, tarpaulins and “simple things” to help get the territory ready for the upcoming hurricane season.

She spoke to reporters last Thursday at press conference at the Immigration Department in Road Town, alongside Christopher Varlack, chief records management officer.

Ms. Martens-Monier, who has recently undertaken similar assessments in St. Martin and Dominica, said that the damage in the VI was above what she had expected upon her arrival. However, she was not surprised.

“I wasn’t there exactly after the storm so I wouldn’t say you didn’t do enough,” she said. “But I can imagine if you were that far [behind] it’s also because the extent was much larger.”

According to Mr. Varlack, around three to five percent of the materials from his main office, which stores the current archives, were lost.

“In terms of the older archives that date back to the mid-1700s, we didn’t lose any because the archive strongroom is relatively safe,” he said.

He added that it is important to make a distinction between current records with no archival value and records slated to become archives.

Ms. Martens-Monier arrived Sunday, April 14. Over last week, she conducted a survey of hurricane damage, met with caretakers and made recommendations for the ongoing stabilisation of the collections, visiting numerous repositories on Tortola and the sister islands, including the VI Folk Museum and other museums.

Mr. Varlack explained that a national archive is an idea that has been on the table since long before the hurricanes. He said it is “absolutely essential” to have a national repository of documents.

“Our cultural heritage is very important. The stage we are now in our development, it’s time,” he said, adding that making that happen necessitates “the will, the funding and just getting it done.”

However, even as plans move forward for a national repository, he said, “structural issues” with the Old Administration Building, where the current strongroom is located, need to be urgently addressed in order to prevent further losses of the territory’s oldest, most valuable records.

Earlier last Thursday, Ms. Martens-Monier held a roundtable for staff in government registries, and said that many of these staff had health and safety concerns about what they were being asked to do.

“They have to look and consult mouldy documents; the situation where they store their records is not ideal; roofs haven’t been repaired; there’s still water dripping and issues with repositories and storage units,” she explained.

In an earlier interview, she said that many repositories she visited were also using temporary storage, with caretakers not knowing how to preserve them properly in light of the damage.

Her visit was sponsored by the Caribbean Branch of the International Council on Archives (CARBICA) as part of the organisation’s larger “Archives at Risk” project, a three-year initiative.

Ms. Martens-Monier said that preparing for the upcoming hurricane season has been made more difficult because caretakers are “split from their records.”

“You can’t repair a roof on your own, and that for me is the priority because it’s already been fragilised by the hurricane,” she added.

“You’d be surprised: What can a piece of plastic do against 200-mile-per-hour winds?” he asked.

But even in the building where he works, which lost part of its roof, many of the records were saved because they were covered in plastic.

Although this isn’t the first time recommendations have been made for improving the way archives are stored, Mr. Varlack noted that after the hurricanes, he has seen increased interest from government officials.

For instance, former Deputy Governor Rosalie Adams “indicated that she wanted to have a scanning project commenced … to ensure that we could begin that process of having them stored on servers … in case there was another storm that came by and robbed us of more material than we’ve already lost.”

Ms. Martens-Monier emphasised that with all the planning one can never fully prepare for a disaster like Irma.

“It’s going to take quite a while to recover,” she said. “I’ve given some tools to prepare [for] whatever will come again.”

This article originally appeared in the Beacon’s April 26 print edition.