Art auctioned by the beach

On Saturday evening, Paradise Club in Cane Garden Bay was lit with a display of art and photography that was up for auction. The five-person show, themed “Wave of Art,” …

END_OF_DOCUMENT_TOKEN_TO_BE_REPLACED 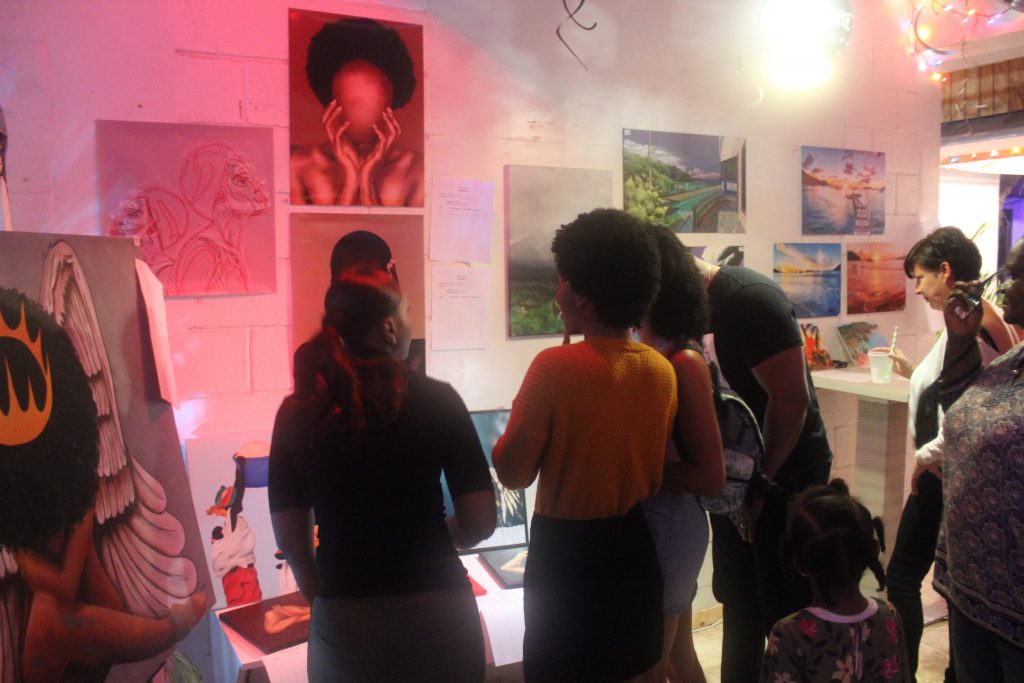 Attendees browse art on display at the Wave of Art auction on Saturday at Paradise Club in Cane Garden Bay. (Photo: NIA DOUGLAS)

On Saturday evening, Paradise Club in Cane Garden Bay was lit with a display of art and photography that was up for auction.

The five-person show, themed “Wave of Art,” was the second such auction organised by the non-profit Rise Foundation.

“We wanted to bring the art culture in the BVI back to life,” said organiser Jovan Cline, the foundation’s 25-year-old president. “It’s something that I personally feel has been put in the shadows over the recent years. We kind of more focus on things that look better as titles and professions. Being an artist kind of gets downgraded, and I don’t think it’s fair.”

This year a portion of the proceeds will go towards the foundation’s new initiative, Star Forgers, which will provide fund- ing to young people who show talent in specific areas, according to Mr. Cline.

The artist with the most pieces up for auction was 21-year-old Via Donovan-Hodge, who spent much of the evening answering questions about her display of 14 pieces, most of which were large paintings of faceless women.

“They’re all portraits of black women, black bodies,” she said. “I think it’s important to paint what I know, and what I know is myself: a black woman who de- serves to be represented in art.”

Ms. Donovan-Hodge is a student at Marymount Manhattan College in New York City, where she is majoring in performance and digital media and minoring in studio arts and drama therapy.

Born and raised in the Carrot Bay area, she paints in different mediums and does digital artwork as well as theatre and dance.

“I want to open an art studio here eventually so that other young people who are interested in art get places to display their art that’s not like a once-a-year thing, but a gallery where people can come and appreciate art on a daily basis,” she said.

On display near her work were three nature photographs taken by 23-year-old Hakeem Gravesande.

Mr. Gravesande said videography is his passion, but he also developed a love for taking still photographs after using his camera for years.

“I enjoy taking nature shots mostly, because it’s like a relaxing feeling,” he said. “It’s calming. I don’t have to think as much. I’m just capturing the moment rather than asking someone to pose or thinking about everything.”

Not too far from Mr. Gravesande’s nature shots were several photographs of starry skies taken by Dr. Drexel Glasgow. Dr. Glasgow is a 46-year- old civil engineer who wanted to share his love for the night sky with others via his collection of “astrophotography.”

“It depicts the movement of the stars over time, over two hours centred around the North Star,” he said of his work. “These shots are 103 shots stacked together.”

He chose them for the auction, he said, based on their popularity and number of “likes” on social media.

One of the many impressed spectators at the show was Junior Minister of Tourism Sharie de Castro.

“I thought that I definitely had to come out and support, especially seeing so many young people who are in the creative arts just showcasing their work and commitment to their industry,” Ms. de Castro told the Beacon. “It’s just amazing, as a poet and a creative myself, seeing this element being glorified and actually showcased in the community.”

Wave of Art was the second event of its kind organised by the Rise Foundation, following “Art from the Ashes” in December 2018, Mr. Cline said.

The organiser intends to continue holding the art show and auction annually and plans to have other art-related events throughout the year as well.