As legislature turns 70, HOA looks ahead

As he spoke about the 1950 restoration of the Legislative Council, Premier Andrew Fahie compared the Virgin Islands to a lab rat that doesn’t realise the familiar glass borders to …

END_OF_DOCUMENT_TOKEN_TO_BE_REPLACED 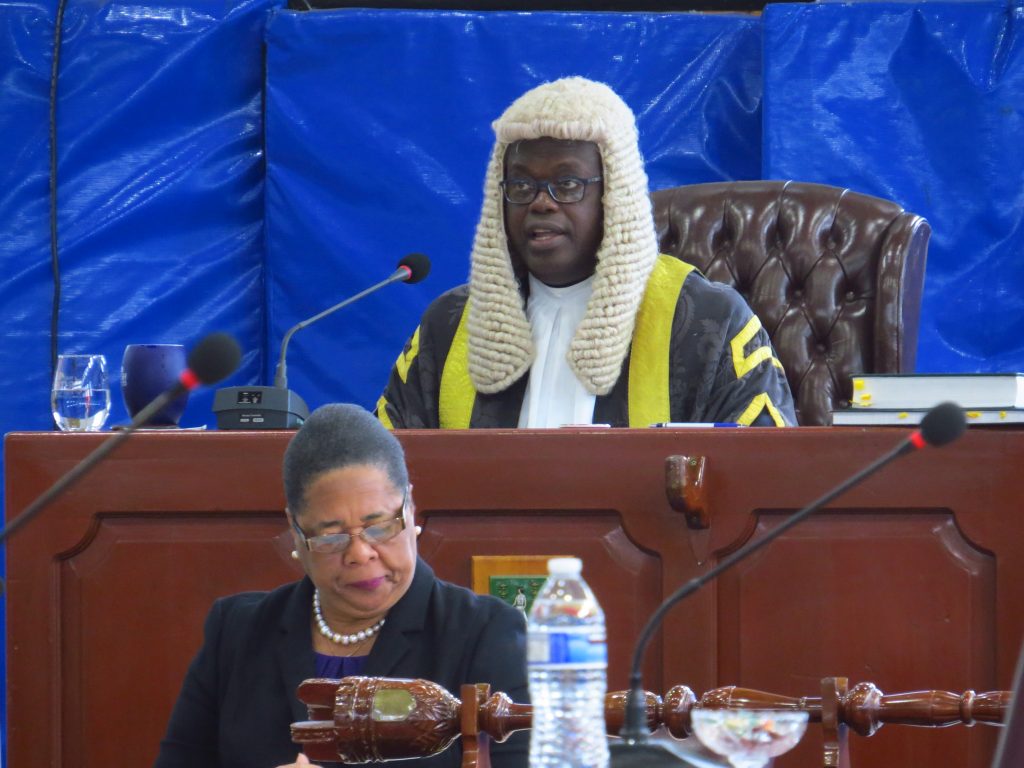 House of Assembly Speaker Julian Willock speaks on the importance of an elected government during a ceremony for the 70th anniversary of the restoration of the Legislative Council, on Dec. 4 at the Save the Seed Energy Centre. (Photo: DANA KAMPA)

As he spoke about the 1950 restoration of the Legislative Council, Premier Andrew Fahie compared the Virgin Islands to a lab rat that doesn’t realise the familiar glass borders to its cage have been removed: Neither, he said, understand their full potential. “We have the ability and the talent to effectively govern ourselves,” Mr. Fahie said.

Pursuing self-determination has been a hot topic recently as the territory prepares to review the 2007 Constitution. But legislators noted a long history of advocating for greater local control as they celebrated the anniversary of the legislature’s restoration during a special sitting on Dec. 4 at the Save the Seed Energy Centre.

“Today, we pause to honour the legacy of our ancestors with the convening of this special sitting,” the premier said. “Today, 70 years later, in the midst of a global pandemic, in the midst of economic challenge, in the midst of our recovery, we take time today to reflect on the foundation that we have laid through this institution, which allows us to choose for ourselves and create for ourselves the future we want.”

HOA members recognised the people who pushed for greater autonomy in the past, especially Theodolph Faulkner.

The Anegada resident, who travelled abroad around World War II before returning home, protested the poor treatment of his ill wife, and on Nov. 24, 1949, he led a march of some 1,500 Virgin Islanders to the then-Commissioner’s Office to voice concerns about the welfare of residents.

Following that protest and other demonstrations, the VI legislature was restored in 1950, nearly half a decade after it was abolished. The VI’s first written constitution shifted leadership power from the governor of the Leeward Islands to the Legislative Council of the VI. The constitution later went through various iterations, gradually extending voting rights and providing for more elected members.

During the Friday ceremony, District Six Representative Alvera Maduro-Caines specifically thanked the women who paved the way for progress.

“Today, I praise my sisters, the super brave women who knocked on the doors for years, begging to be let in,” Ms. Maduro-Caines said, specifically commending fellow Baughers Bay representative Millicent Mercer, who ran for office in 1971.

“Miss Millie was dragged through the political mud, but she fought on that day of voting, election day. She was not elected, but she proved women could try, and oh how they did,” she said and was met with desk tapping in approval.

Of the 15 current members of the House, four are women — including newly appointed Attorney General Dawn Smith.

Ms. Maduro-Caines also recognised the contributions of Eileene Parsons, Patsy Lake and others.

Other legislators also offered their appreciation for predecessors and reflected on what their own legacy will be with the current review of the 2007 Constitution.

“It’s important to note that the self-determination conversation did not just start,” Mr. Fahie said.

He formally announced in June that the House would launch a review of the 2007 Constitution, a process delayed for years in part by Hurricane Irma in 2017.

At the time, he said pursuing the review is imperative if the VI is to follow its aspirations for economic empowerment and self-governance.

Mr. Fahie also drew parallels between today’s push for self-determination and the efforts of community members 70 years ago to pursue greater representation — and ultimately the allocation of more resources for health care, roads, schools and other development.

“We are again seeing where decisions are being made for us, and these decisions are out of touch and out of sync with the realities on the ground, and our people are suffering for it,” Mr. Fahie said.

HOA Speaker Julian Willock said in his opening remarks that now may be time to re-evaluate the relationship among the legislative, executive and judicial branches. Other branches, he explained, are sometimes given “inherent tools” that the House doesn’t receive.

Mr. Willock, for instance, took issue with the debate more than a year ago surrounding the premier’s security detail.

At the time, Mr. Fahie faced questions about the cost of the private security officers he used for several months before police officers took over the job. The premier came under fire for not providing information about how much the security measures cost taxpayers.

But Mr. Willock complained that the governor and chief justice — whose security is provided by police — did not face similar inquiries.

“Again, it speaks to a different standard, or, might I say, interpretation of co-equal branches of government,” Mr. Willock stated. “While the other two branches are allowed to have the tools that come with the office, for us in the legislative branch, it continues to be a struggle.”

Mr. Willock added that he wants the House to receive the respect and courtesy it is due as an equal branch of government.

“As members and the public probe new constitutional arrangements with the United Kingdom, one consideration, in my humble view, should be the legislature having the power to override an unelected governor when he refuses to assent to a bill,” he said, adding, “It is an insult to this House of Assembly when 13 elected members pass a bill [and] then an unelected governor could just refuse to assent to a bill without a proper explanation. That can never be good governance, transparency or democratic practice, notwithstanding Section 79.2 of the Constitution. … I trust by the time we are ready to celebrate our 75th or 80th anniversary of the restoration of the legislature, we as free people will not have to face such issues.”

Mr. Fahie shared his hope that one day the governor, who is appointed by the Queen, will be Caribbean born. Although the Constitution does not prohibit a Virgin Islander governor, none has held the position.

Junior Minister for Trade and Economic Development Shereen Flax-Charles said the relatively young VI government has faced significant challenges in addressing devastating natural disasters, a pandemic, economic struggles and more, but it has grown in that time.

“As the voice and ear of businesspeople in the BVI, one critical lesson that I have been afforded, particularly during this period of constant and precipitous change, is that one of the most valuable tools for success in our arsenals is the impartiality and candidness to self-reflect,” she said. “After 70 years of self-determined legislation, it is on our shoulders to continue a tradition of good governance, fuelled by perpetual and symmetrical dialogue with our people.”

A previous HOA session will continue Monday, with the start of the budget debate.