Local News > As RDA contractors clean up VI, Kausina takes a back seat

As RDA contractors clean up VI, Kausina takes a back seat

The Recovery and Development Agency has begun work on its first official order of business: getting rid of hurricane debris that has littered the Virgin Islands for almost a year. …

END_OF_DOCUMENT_TOKEN_TO_BE_REPLACED 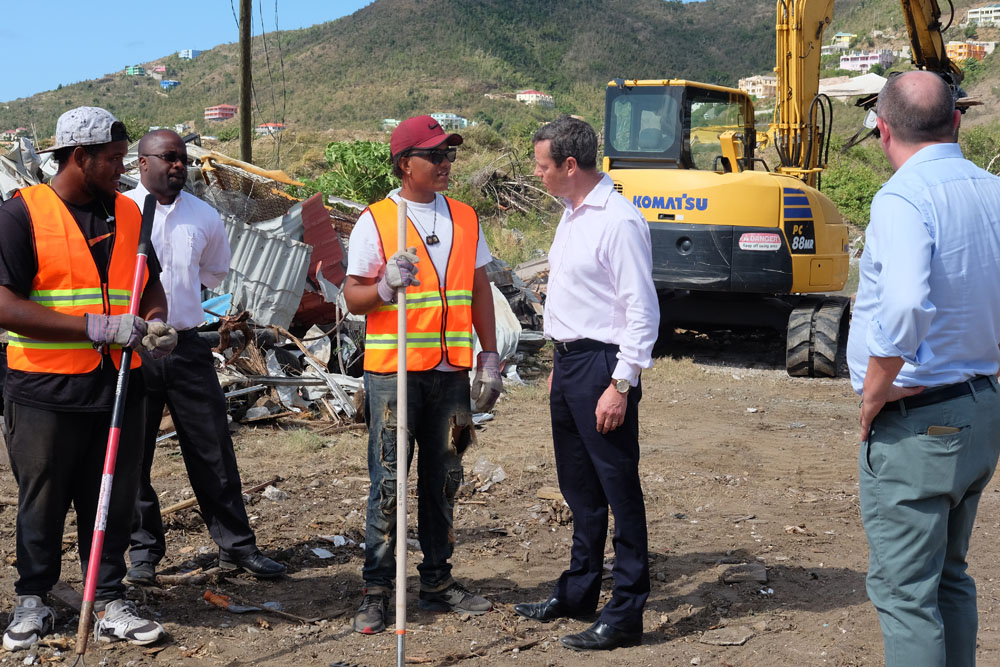 The Recovery and Development Agency has begun work on its first official order of business: getting rid of hurricane debris that has littered the Virgin Islands for almost a year.

Nine local businesses were awarded 13 contracts late last month to help clean up certain areas of Tortola and Jost Van Dyke. They mark the first contracts that the RDA has signed since its creation, according to the agency’s newly appointed CEO, Paul Bayly.

But the cleanup project isn’t new: It has merely been taken on by different entities.

Roughly nine months ago, government selected the unregistered company Kausina VI partly to do the same work: collect bulky waste and debris from around Tortola, then bring metal and recyclables to the post-Irma Coxheath dumpsite for processing and eventual export.

Since then, however, there have been several setbacks with the company, and as of last week Kausina still had not exported any debris or recyclables off island, according to Department of Waste Management Manager Greg Massicote.

Mr. Massicote said that some of the work the nine RDA-approved contractors are doing now originally fell under Kausina’s job description.

“They were supposed to be part of the collection [of hurricane debris] as well as deal with the exportation [of recyclables from the island], yes,” he said of the company.

The manager did not say why Kausina is no longer completing the first part of its initial agreement with government.

The firm has continued to process and bale metal in Coxheath, Mr. Massicote said, but added that there have been delays in that part of the operation as well.

“I don’t think [Kausina employees] were there for the past couple weeks but they were up there, or down there, since, I would say, maybe about three weeks ago,” he said.

Asked if Kausina is collecting any debris from around the island, Mr. Massicote said, “At this point, these [RDA-approved] contractors are doing that.”

Kausina VI founder Walter Parker — who was sued by a disgruntled former investor several years ago and has been ordered to pay some $500,000 in the lawsuit — did not respond for comment about his company’s current work in the territory or whether he has returned to Tortola after being in the US in April.

He declined to answer those same questions in June.

Petrona Davies, permanent secretary in the Ministry of Health and Social Development, could not be reached for comment on whether the ministry still stands by its initial agreement with the company.

Under that agreement, Kausina would not receive direct payment for its job in the VI — it planned instead to earn money by selling recyclables — but government provided various perks including work permit exemptions, the use of Department of Waste Management machinery and personnel, and shared office space, Kausina and government officials have said.

Like Coxheath, the temporary dumpsite was set up after the storm for residents to drop off large hurricane debris, but it has long since been closed. For months, sheets of galvanised metal, pieces of furniture and heaps of generally unrecognisable trash have sat in the dirt lot.

The cleanup is part of the “Special Debris Clearance Contract Project” — an approximately $560,000 endeavour designed to help beautify Tortola and Jost Van Dyke.

Additional funding is expected to address removing debris on Anegada and Virgin Gorda, the RDA has said.

Cleanup work will continue through Aug. 31 to ensure that debris will not become dangerous projectiles during peak hurricane season, according to the RDA and Mr. Massicote.

Mr. Bayly, who arrived in the territory at the end of July, stopped by the East End debris-clearing site in early August to review progress being made.

“I came from Fiji and I’ve been elsewhere where we’ve had major destruction, … but here [this is what] we’re going to do: Let’s get the cleanup done; let’s get [repairs for] some of these buildings under way; let’s see how we can get children out of tents, that sort of stuff,” he said.

The CEO also said there could be a misperception that the RDA will function completely independently from government.

The RDA will, however, be independent from government in its procurement processes, he said.