Crowds swarmed grocery stores and other businesses late last week to prepare for a 14-day lockdown in the territory, sparking heated criticism and raising questions about the government’s unusual system …

END_OF_DOCUMENT_TOKEN_TO_BE_REPLACED 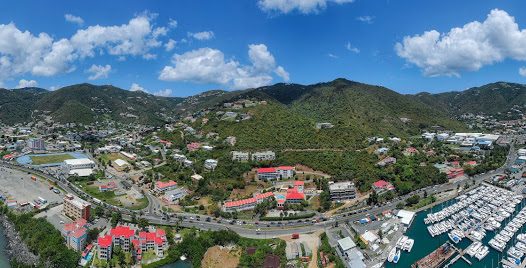 Traffic slowed to a crawl in Road Town as shoppers visited stores last Thursday to stock up for the lockdown. (Photo: ALTON BERTIE)

Crowds swarmed grocery stores and other businesses late last week to prepare for a 14-day lockdown in the territory, sparking heated criticism and raising questions about the government’s unusual system of closing essential businesses during lockdowns to help prevent the spread of COVID-19.

Many jurisdictions have implemented curfews in recent weeks, but in order to avoid crowds most of them have allowed essential businesses to remain open, albeit with restricted access in many cases. Here, the government gave residents three days to stock up following a previous six-day lockdown that ended last Thursday morning.

Premier Andrew Fahie and other leaders have described the government’s strategy as bold action that could eliminate COVID-19 before it begins spreading in the territory. But others have expressed concern that the long-term closures mean that stores will continue to see dangerously large crowds on the few days that they are open.

Following widespread criticism from frustrated shoppers on social media last week, Governor Gus Jaspert acknowledged on Sunday that responding to the COVID-19 outbreak has been a “learning experience.”

“We have a unique opportunity to get the next 14 days right,” he added. “Four- teen days is the period identified medically to determine if the virus is prevalent. It is vital we all play our part in ensuring that we stick to this lockdown.”

Mr. Jaspert also promised this week to disclose the “science” behind the decisions being made, but he had made no further announcement on the topic as of press time yesterday afternoon.

Though Virgin Islands health officials have not responded to the Beacon’s messages in recent weeks — and government’s promised press conferences fell by the wayside after March 24 — public health experts abroad explained that the rush on stores over three days could have increased transmission of the virus.

“I would hope [the government is] thinking of better ways to open stores up again to minimise transmission,” said Dr. Tara Smith, an epidemiologist at Kent State University. “Most places are keeping essential places open with restricted hours.”

Here, on April 1, officials announced a system that would allow residents with surnames beginning with A-I to shop last Thursday, surnames J-R to shop Friday, and surnames S-Z to shop on Saturday between 8 a.m. and 6 p.m.

Grocery stores, pharmacies, banks, and other essential services also opened their doors to senior citizens and essential workers between 6 a.m. and 8 a.m. on those three days, and residents who were not seniors began filling the lines at stores in the early hours of morning.

Starting last Thursday, many shoppers took to social media to share their frustration, often reporting that they stood in line for several hours and that social distancing guidelines were not always enforced. Some offered ideas for improvement.

Beth Brown, a member of the Facebook group “BVI Community Board,” posted a message to the premier and governor that stated, “This is not working. … I would like to suggest that grocery stores be open seven days a week with the businesses having two shifts of workers (to avoid exhaustion and lowered immune systems).”

Though police officers and employees at some stores checked for identification during the three-day period as leaders promised, this enforcement was not consistent.

A change was announced last Thursday afternoon. After chairing a meeting with the National Security Council during the turmoil that day, the governor announced that shop- ping hours would be extended to 9 p.m. each day and that res- idents with surnames A-I could continue shopping on Friday if needed.

“I and ministers are aware there have been some challenges today accessing essential supplies and keeping safe social distances while shopping,” Mr. Jaspert said in a statement last Thursday. “This is an unprecedented time and the approach we are taking is something that we and shops have never had to take before. We are learning from the experience today.”

He promised that the rules would be better enforced the next day as officials tried to maintain order. The crowds continued the next morning, but thinned in the afternoon, and by late Saturday they had greatly diminished.

Mr. Fahie addressed the territory this week, commend- ing efforts that have been taken while noting that “we must congregate less and have the social distancing between us so that there is less opportunity of transmitting.”

The 14-day lockdown was initially slated to last from April 2-16, but with the three-day limited curfew, Cabinet extended it until April 19.

Dr. Maciej Boni, an associate professor of infectious dis- eases at Penn State University, said a full lockdown with closed stores might not be necessary, but it could be highly effective if managed well.

“When it comes to lock- down time, when you’re worried that cases might be coming or the disease might be spreading, it’s true that you do not need a total lockdown. Partials lockdowns do work partially,” Dr. Boni said. “The challenge with this three-day rush is you’re putting lots of people into a crowded situation within a few days, which is why the partial lockdown is a pretty good idea, because it keeps the grocery stores open continuously.”

Nevertheless, he also commended the VI for shutting borders and ordering a curfew at a time when the territory has confirmed only three cases, stating that lockdowns work well when they’re done early. If the territory finishes the two-week lockdown with no new confirmed cases, then the exercise would have proved effective and will look like the right decision, he added.

“It’s a painful, annoying two weeks, but look at what people are going through in New York City and Washington State and Italy and Spain,” he said. “It could be much, much worse.”

Moving forward, Dr. Boni suggested placing an extreme disinfection policy on food and supply shipments coming into the territory and testing as many people as possible.

“I would continue buying tests and test people on a weekly basis,” he said, urging health officials to devise a plan to administer a consistent number of tests each week. “It’s a prudent and cautious plan to show there’s zero infections on the island.”

He also advised keeping in place the ban on large gatherings.

Attempts to reach Mr. Malone and the Premier’s Office to learn more about the government’s long-term strategy were unsuccessful. BVI Health Services Authority CEO Dr. Ronald Georges directed all questions to Government Information Services, which did not respond.