Kate Mathew was eating nachos on the beach in Cane Garden Bay Sunday evening, while a few yards away kids tossed a ball in the surf and swimmers lazed around …

END_OF_DOCUMENT_TOKEN_TO_BE_REPLACED 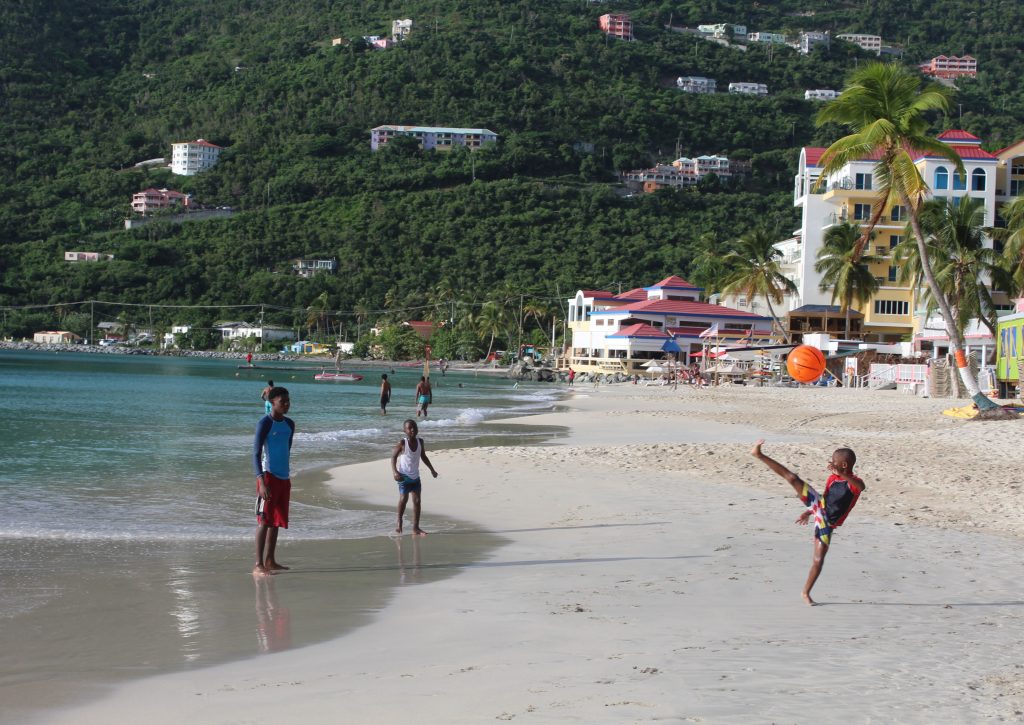 A group of kids kick a ball to one another in Cane Garden Bay. The beach reopened Friday after government said it was “closed” to high levels of bacteria in the water.

Kate Mathew was eating nachos on the beach in Cane Garden Bay Sunday evening, while a few yards away kids tossed a ball in the surf and swimmers lazed around in the clear water.

Because there is so much to do in Cane Garden Bay and such a variety of bars and restaurants, the beach is one of Ms. Mathew’s favourites in the territory, she said.So while she was happy that the government reopened the beach after closing it the previous week, prompted by high levels of bacteria in the water, she had some suspicions about how quickly the announcement came.

“My reaction was … it shut for such a small period of time: How’d they get it clean so quickly?” she said.

Nonetheless, Ms. Mathew has never been averse to swimming in the bay, and she decided to stay dry Sunday because she had brought her dog to the beach and wanted to relax on the sand, not because she was worried about the water quality, she said.

Cane Garden Bay reopened to the public last Thursday, less than a week after government announced the closure.

“Results of days of water quality testing at Cane Garden Bay and Brewers Bay beaches have shown that water quality has improved to levels that can facilitate recreational use,” according to a press release issued last Thursday.

Natural Resources, Labour and Immigration Minister Vincent Wheatley commended officials at the government’s Environmental Unit and the Environmental Health Division for their “hard work in ensuring the beach is safe for recreational use,” the press release stated, adding that government will continue carrying out such tests to ensure beachgoers’ safety.

The closure, however, didn’t seem to deter visitors from the beach, as people including cruise ship passengers continued to swim in the water during its closure, said Damian Cooper, who runs a car washing business in Cane Garden Bay.

When a Beacon reporter visited the beach one weekday morning while it was still closed, he did not see any signs warning of the bacteria, and he saw several people in the water.

But now, with the water officially safe for swimming and preparations for the tourist season beginning to ramp up, the beach seems to be almost in full swing.

On Sunday evening, sunbathers laid out on reclining beach chairs, groups of friends gathered on restaurant patios, and children splashed in the water. A boat moored just off shore.

“With the start of the season … it’s better to be opened,” Ms.Mathew said.