At 30, college preps for expansion

As deputy chairwoman of the board of governors at H. Lavity Stoutt Community College, Fiona Forbes-Vanterpool knows she has big shoes to fill. “When I reflect on the challenges that …

END_OF_DOCUMENT_TOKEN_TO_BE_REPLACED 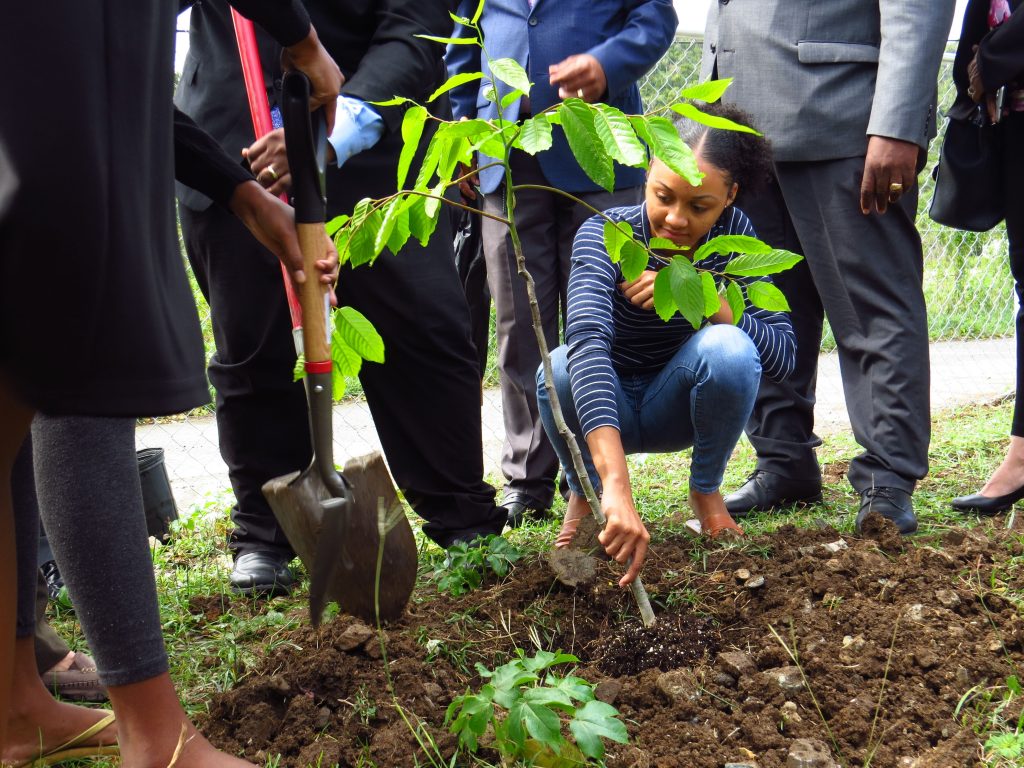 As deputy chairwoman of the board of governors at H. Lavity Stoutt Community College, Fiona Forbes-Vanterpool knows she has big shoes to fill.

“When I reflect on the challenges that the founders of HLSCC must have encountered when the institution was started, I’m in awe of their vision and their tenacity,” she said as the college celebrated its 30th anniversary Tuesday during a Founding Day ceremony on the campus.

Attendees marked the occasion by unveiling a painting of the late chairman emeritus and former Premier Ralph O’Neal and planting an anniversary tree.

Campus leaders had plenty to look forward to, in particular the pending construction of a new dormitory on campus, which they said is key to taking the school to the next level. But first, they took a look back 30 years ago.

Then-Chief Minister H. Lavity Stoutt took a lead role in forming the institution, which was officially established in 1990 as the British Virgin Islands Community College. The school moved to its permanent campus in Paraquita Bay three years later.

Ms. Forbes-Vanterpool reflected on what it took to make the institution what it is today.

“I have tried to imagine that moment in history — a small, primarily agricultural nation with hopes of increasing its tourism sector, responding to the beckoning call of the financial services sector, and dealing with limited resources,” she said. “Our founding fathers had to make choices about their community needs and what it would need most in the decades to come.”

Ms. Forbes-Vanterpool said by creating an institution of higher learning, the founders put many VI residents in a better position to increase their marketable skills and improve their lives.

She pointed to several markers of the school’s success, including an increase in course offerings, the establishment of Virgin Gorda’s sister campus, the development of a culinary arts centre and a regional centre for applied marine studies, and rebounding enrolment since Hurricane Irma.

“One of the institution’s most noteworthy accomplishments, in my opinion, has been the development of relationships with other institutions of higher learning,” she said.

Through these connections, HLSCC offers bachelor’s and master’s degree programmes.

“In so doing, these islanders were able to gain further education and training to advance themselves from lower to middle management and senior positions within both the public and private sector,” she said. “This is a huge accomplishment for such a young institution.”

But more is on the horizon.

HLSCC acting President Dr. Richard Georges, an HLSCC alumnus, confirmed that on Monday the college had received documents from the lands commission approving a transfer of more than 100 acres of Crown land to the school.

On Tuesday Dr. Georges also outlined four key priorities for HLSCC in the coming decade. They include investing in programmes designed to prepare students for future careers, strengthening relationships with other institutions, prioritising sustainability and accountability, and attracting more students.

“The college has realised that it must take steps to solidify its financial footing before its vision of the future can be made a reality,” Dr. Georges said. “As such, it cannot be overstated how valuable the government’s transfer of 134 acres is to the college’s ability to realise the founding vision.”

Dr. Georges said the college is mindful of its duty to be a responsible steward of important resources, and is determined to show how the investment is money well spent.

Additional accommodations, he explained, will open the door to more students.

“This initiative will not only improve access to college for all Virgin Islanders, but also prepare our students to be full digital citizens of the global workplace,” he said. “Here I may have a more radical view than others. … The reality is, the population oft he BVI is not enough to grow this college to what Lavity Stoutt envisioned. But, you see, that is a good thing. Because our mission is to become a regional centre of choice, it means that we now must start to look further afield than our own shores.”

Dr. Georges said the college’s culinary and hospitality programmes already draw students throughout the Caribbean, and he has high hopes for new maritime studies initiatives.

Premier Andrew Fahie said he is pleased the college is exploring new territory with its courses. HLSCC recently launched a new maritime and marine education programme, and Mr. Fahie commended the school for its early success in being fully booked through 2021.

“That tells me something is being done right,” he said.

The premier also spoke about a need for programmes and courses that prepare students for ever-changing market demands such as the renewable energy industry.

“What we are doing here is making sure that industry does not come to the BVI and the people are left behind,” he said. “We are making sure HLSCC is taking the lead by partnering with all of us to make sure we train our people before the industry starts.”

The Founding Day ceremony moved outside as community leaders helped to planta ylang-ylang tree, noted for fragrant chartreuse flowers that are rumoured to be a key ingredient in Chanel No. 5 perfume.

Students from the HLSCC Environmental Club spear-headed the tree planting. Eva Baskin, HLSCC science lab manager and the club’s faculty advisor, said she hopes that with the new focus on expansion, young people in the community will see more of what the college has to offer. Kaysia Maimehon, who is in her second semester of study at HLSCC, was one of the students who helped plant the tree. Ms. Maimehon said she values being able to pursue higher education without having to travel overseas. Besides avoiding the expense of moving away, she appreciates being a student in the community where she was raised, and looks forward to one day being able to give back.

“I would get really homesick if I were to go away, so I’m glad we have a college here so I can come every day and still get an education, and stay with my family,” she said.

Alexia Penn, a high school student with dual enrolment at HLSCC and fellow member of the environmental group, said she appreciates being able to attend the school where her mother has been a lecturer or years.

“It’s nice to see what it feels like to be a college student, not just a child running around,” Ms. Penn said with a laugh.

Even if she later decides to pursue higher education somewhere else, Ms. Penn said HLSCC has been a valuable steppingstone. She hopes to bring those skills, perhaps in the sciences, back to the VI.

HLSCC alumna Lenette Lewis, now a lecturer in the college’s math and science department, said she is proud to be able to give back to the community as an educator. She knows the value of community support when it comes to the success of the institution, and she hopes people will continue to champion future growth.

“It’s really a great occasion for us to be celebrating 30 years as we look toward the future, to educate more citizens in the region,” she said.

In the next decade, Ms. Lewis said she is excited the college is focusing on sustainability research and she hopes it will become a role model throughout the Caribbean.

She said the school has been on a long journey, particularly as it worked to recover from Hurricane Irma. But last year’s graduation proved HLSCC’s students could withstand the full brunt of the storm, adapt and still succeed.

“It is really good to look and see how far we’ve come,” she said.