At COP27, call made for louder Overseas Territories voice

END_OF_DOCUMENT_TOKEN_TO_BE_REPLACED 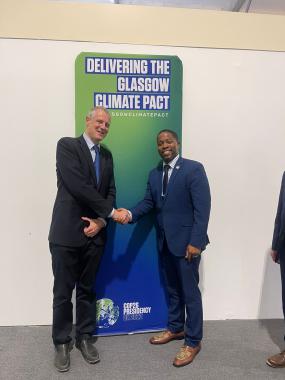 The Virgin Islands and other overseas territories need “truer” representation at global forums like the ongoing COP27 climate change conference in Sharm ElSheik, Egypt, Natural Resources and Labour Minister Mitch Turnbull said on Tuesday. He made the point while meeting with Lord Zac Goldsmith, the United Kingdom’s new OT minister, on the sidelines of the United Nations conference, according to the VI government.

COP27, which started Nov. 6 and is scheduled to end tomorrow, brought together more than 100 world leaders and thousands of other attendees to discuss an array of issues including rising global temperatures.

The forum has seen negotiators from nearly 200 countries working with limited success to find consensus on plans to cut emissions and to create a “loss  and-damage” fund for countries being negatively affected by climate change.

But the VI and other UK territories — which in many ways are on the front lines of the climate crisis — could not participate directly in the negotiations: Because they are represented by the UK, they are not permitted to send their own negotiators to the talks.

In the lead-up to the negotiations last week, leaders of small island states publicly criticised wealthy nations for driving global warming and urged them to pay for economic damages sustained by their poorer counterparts.
Mr. Turnbull said Tuesday that his call for better representation of the OTs on the global stage was made against the backdrop that the territories “make up about 90 percent of the UK’s oceans and areas significantly affected by climate change.”

During his meeting with Lord Goldsmith, he added, the British member of parliament expressed enthusiasm about his new portfolio and pledged to provide resources to different regions to mitigate the climate crisis.

Mr. Turnbull deemed the appointment of Lord Goldsmith — the successor of Jesse Norman, who served briefly as OT minister while Liz Truss was prime minister in September and October — as opportune because “his professional interests and innate passions comprise nature and the environment.”

The VI minister also said he invited Lord Goldsmith to visit the territory as Mr. Norman had planned to do shortly before he was replaced.

Last Thursday on the sidelines of COP27, Mr. Turnbull also signed a joint declaration on climate financing along with 12 other parliamentarians from ten countries and territories in Latin America and the Caribbean who participate in the Parliamentary Observatory on Climate Change and Just Transition (known by its Spanish acronym OPCC).

The declaration was signed during a hybrid forum organised by the Economic Commission for Latin America and the Caribbean with the support of the European Union through the Euroclima+ Programme and the Open Society Foundations, the UN stated.

The declaration reaffirms the signatories’ commitment to “the co-construction of a concrete agenda of actions to promote information access and the design of climate policies,” according to the UN.

Additionally, the agreement highlights the main preliminary findings of the OPCC’s first policy brief, which is expected to present a comparative study of climate change framework legislation in the countries represented in the OPCC, including the issue of climate finance, the UN stated.

As of Tuesday, Reuters stated, negotiations at the conference had been moving at a snail’s pace since the negotiators had been unable to find consensus on a proposed loss-and damage fund through which rich nations would help developing nations meet the costs of climate-related disasters.

Before Mr. Turnbull left for COP27, he said the VI delegation would aim to collaborate with other nations to influence the global conversation on climate-change solutions. He pointed out that small island nations typically have the smallest carbon footprints and produce the least pollution, but they often suffer the worst effects of climate change.

“This is why our presence and participation in COP27 along with other small island states is crucial,” he said. Mr. Turnbull added that the increasing frequency and intensity of extreme weather events globally is impacting the lives of millions of people. In that regard, he said, the VI has had first-hand experience from the devastation caused by hurricanes Irma and Maria in 2017.

Barbados Prime Minister Mia Mottley aired similar concerns when she made a blistering call for more action last week at COP27. Ms. Mottley told the audience that funding is badly needed to assist small nations in their climate-change mitigation efforts, and she noted that many such states have put mitigation plans in place. “We have come here to ask that we open our minds to different possibilities,” she said.

“We believe we have a plan that there can be the establishment of a climate mitigation trust that unlocks $5 trillion of private-sector savings if we can summon the will to use the [International Monetary Fund’s Special Drawing Rights] — $500 billions of SDRs in a way that unlocks the private-sector capital,” she said.

Ms. Mottley and other island leaders also urged attendees to move forward with a loss-and-damage fund to help the countries most affected by climate change. “How do companies make $200 billion in profits in the last three months and not expect to contribute at least ten cents in every dollar of profit to a loss and-damage fund? This is what our people expect,” she said.

As of the Beacon’s print deadline yesterday afternoon, negotiators were still debating a draft text that would launch such a fund, in hopes of reaching an agreement before COP27 ends tomorrow. Ms. Mottley also called for an end to the ongoing Russia Ukraine war, noting that countries such as Barbados often suffer from conflicts that don’t involve them. “Our people on this earth deserve better,” she said.

“And what is more, our leaders know better. Because while many of us may not have been alive during the great wars, the consequences of those wars still live with us, and we have the capacity to choose differently.”

She added that all stakeholders — including oil and gas companies and associated entities — should meet to discuss pertinent issues prior to COP28, which is scheduled to be held in the United Arab Emirates next November.