A prominent sign was nailed to a tree at the entrance to Foxy’s Tamarind Bar on Saturday. “Please be reminded,” it warned in bold type. “Cannabis is against the law …

END_OF_DOCUMENT_TOKEN_TO_BE_REPLACED 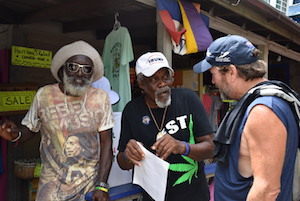 A prominent sign was nailed to a tree at the entrance to Foxy’s Tamarind Bar on Saturday.

“Please be reminded,” it warned in bold type. “Cannabis is against the law in the Virgin Islands and the police will arrest you if you do not respect the law.”

But neither the law nor the threat of inclement weather seemed to harm the marijuana-themed festivities on Saturday at Foxy’s Hemp Fest, the first event of its kind at the bar in Great Harbour, Jost Van Dyke.

The event was conceived by owner Philliciano “Foxy” Callwood and general manager Tom Warner as an attempt to spark dialogue about the possibilities for marijuana decriminalisation and legalisation in the Virgin Islands.

“This is not just about smoking,” said St. Thomas-based economist Mark Wenner, the first of the speakers who took the stage during the day between music acts and a fashion show. “It’s about economic opportunity.”

Mr. Wenner, who formerly worked for the Inter-American Development Bank, noted that the VI, along with much of the Caribbean, is facing economic challenges, with billions of dollars worth of hurricane damage and the looming threat of the United Kingdom’s requirement to implement public company registers, which could harm the financial services industry.

Meanwhile, he said, states in the United States that have legalised marijuana are predicted to rake in more than $20 billion in revenue by 2025.

In his remarks, he came out strongly in favour of legalisation in the VI. He supported Mr. Wenner’s argument about the economic opportunity and tax revenue that could be derived from cannabis production, as well as the potential tourist traffic it would draw.

He also reviewed possible medical benefits of pot for treating illnesses like cancer and glaucoma, and spoke to the fruitlessness of incarcerating people for recreational use of the drug.

“We would not want to see young persons locked in jail for something as trivial as smoking a joint, especially when we know that marijuana is not more harmful than alcohol or tobacco,” he said.

With a general election coming soon, Mr. Wheatley also acknowledged that his appearance at the event might be politically risky.

“But I want to say without a shadow of a doubt that I am proud to be associated with this event,” he said. “I believe that we’re going to look back and say that this hemp fest was an important step on the road to legalisation or normalisation of the use of marijuana.”

Mr. Wheatley stressed that he wasn’t advocating a free-for-all, and said that educating the public about the drug’s safe use would be key.

“We don’t have to wait for every single country in the world,” he said. “We can actually endeavour to become a leader regionally and maybe even internationally … in the responsible sale and responsible regulation of it.”

Barbara LaMonte, president of the St. Thomas-based pro-cannabis advocacy group USVI Normal, had many reasons for attending the festival. However, she said the most important was personal.

“Two of my children are ill,” she said in an interview, explaining that her son uses medical marijuana to treat symptoms of Huntington’s disease, an incurable, degenerative nerve disorder. “It’s not getting better at all, but what it does do is make it a little more tolerable.”

Ms. LaMonte’s organisation, formed in 2008, was key in pushing for the 2014 decriminalisation of marijuana in her territory. She worked closely with USVI Senator Terrence “Positive” Nelson, who introduced the legislation.

“If this was introduced to our medical options, you would see people lining up to get it,” she said. “And now I’m ready for there to be a plan to be written to change the laws … to provide a medicinal option for our community and an industrial option for [the USVI].”

Mr. Nelson, one of the keynote speakers at the Saturday fest, claimed that cannabis, which was legal in the US until 1937, was demonised by a group of American industrialists who didn’t want to lose revenue to hemp.

“This was a conspiracy,” he said, adding that change is coming now that more people know that “hemp makes all kind of products, from oils to building products to paper.”

He also paid tribute to Rastafarians, who were well represented at the fest, for the persecution they had endured in the Caribbean for their religious beliefs, which include the use of marijuana.

“There’s a redemption crusade [for the drug],” the senator said. “Some people still can’t believe that I’m a seven-term senator standing in front of you and I’m a Rasta man. Science has redeemed [us]. Doctors and scientists are saying the plant has value.”

Upstairs at Foxy’s, about ten vendors sold everything from organic soaps to handmade sculptures shaped like oversized joints, which a few patrons wore on necklaces.

Susan Zaluski, director of the Jost Van Dykes Preservation Society, said the looming threat of Hurricane Beryl, which was making its way toward the territory on Saturday, caused only a few cancellations.

“In general, it’s been a really nice combination of businesses,” she said. “It’s a good, diverse mix of ventures.”

None of the products for sale contained cannabis, noted Ms. Zaluski, who helped organise the event, adding that police patrolled the festival throughout the day and night.

“The police have come around a couple of times,” she said. “They are just patrolling; making sure everyone’s well-behaved.”

But she also said that there was more to the festival then just people wanting to be able to legally get high.

“I’ve heard, ‘What is the world coming to? Why are they doing this?’” Ms. Graham said, adding that the critic who posed those questions was a minister.

“And I said, ‘Well, what’s the purpose of having marijuana being illegal in this country?’ And she said, ‘I beg to differ.’”

Barhoum Tarabay is a telecommunications worker and father of two who was born and raised in the VI.

He opposes marijuana legalisation and has shared his views on social media message boards.

Contacted by the Beacon, Mr. Tarabay said he opposes legalising the drug in the VI because “we don’t have the manpower to police it properly.”

If pot were legalised, he believes crime would increase “because we would view it as something that is not taboo anymore.”

Mr. Tarabay added that while he does not object to the drug on religious grounds, he does on moral ones.

“Whether it be alcohol or marijuana — anything that basically impairs you — it essentially makes you not yourself,” he said.

Asked about claims of excessively harsh sentences for minor drug offences, he said sentencing guidelines should be reviewed for fairness.

At least one religious leader in the territory, Bishop John Cline of New Life Baptist Church, has spoken publicly on the subject.

“America is making billions of dollars off of selling marijuana,” he said last year on a television show. “This is the same thing we’ve got our young men locked up in jail for. Something wrong with that. … If they can legalise alcohol, they can legalise marijuana.”

But Ms. Graham said that other residents, like her minister friend, assume that legalisation advocates must be “potheads.”

According to Ms. Zaluski, “A lot of the people who are supporting this don’t even smoke necessarily. What they’re advocating for is freedom.”

Alexandra Durante of EC Soap Co brought soaps and snacks to sell. Although none of her products are currently made of hemp, she expressed hope that at some point they legally could be.

“It’s another avenue of revenue in the BVI,” she said. “Right now there are a lot of things happening that a lot of people are scared [of because of economic uncertainty]. And I think this opens up another way. It’s a multifaceted world.”

“Basically the idea of the festival is about supporting natural products,” she said. “If you notice, a lot of the people are also pushing healthier lifestyles. People are looking for the options.”

Mr. Callwood performed several songs around 5 p.m., though he did not directly address the subject of the festival onstage. In an earlier interview, however, he said that he uses marijuana himself.

“It’s time to legalise it,” he said at the time.

Mr. Nelson, the USVI senator, praised Mr. Callwood for taking a vocal stand on the issue, and urged attendees to “stand strong with the individual representatives willing to push this legisla-tion forward.”

“The genie is not going back into the bottle,” he said, adding, “The rest of the world is going to legalise and you want to catch the surf.”

Mr. Warner previously said that he believes politicians would be listening closely to the discussions raised at the fest about how to move forward.

“I think what we’re starting to do here is an important first step in what’s going to be a long journey to decriminalisation and legalisation of marijuana here in the British Virgin Islands,” he added.

“I think it’s important that everybody understand that we do this in the correct way. We’ve had a lot of focus on respecting the law and working with the government so that this is a journey and not a battle.”