Attorney general’s residence to be repaired

A Virgin Islands construction firm has been tapped to perform more than $300,000 worth of repairs to the attorney general’s residence in McNamara, more than three years after the building …

END_OF_DOCUMENT_TOKEN_TO_BE_REPLACED 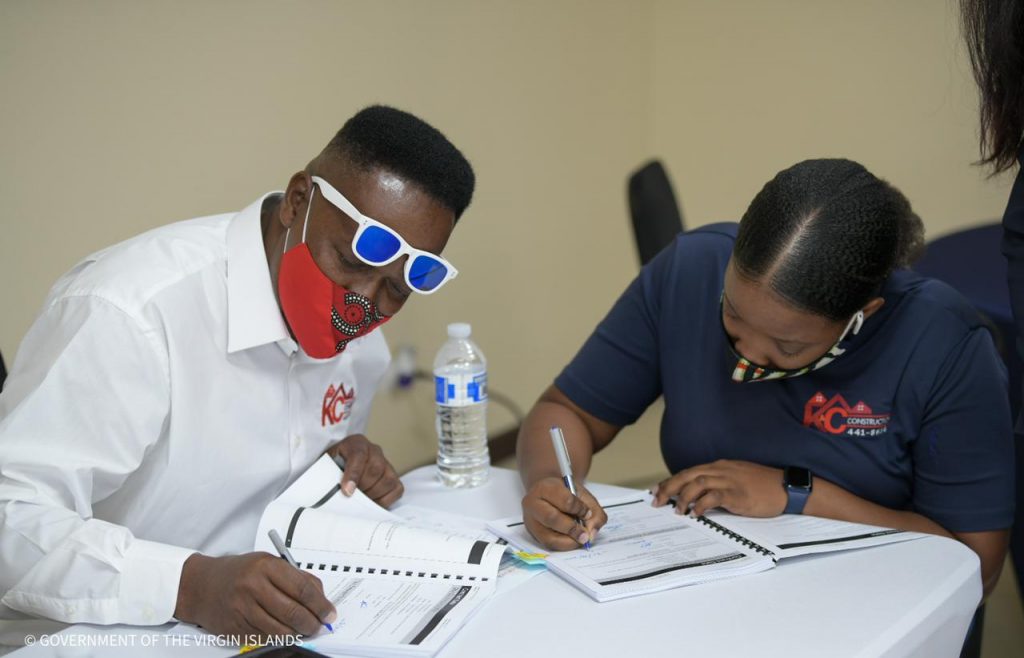 Kendol Arthur of K&C Construction signed a contract with the Recovery and Development Agency for repairs to the attorney general’s residence in McNamara. (Photo: GIS)

A Virgin Islands construction firm has been tapped to perform more than $300,000 worth of repairs to the attorney general’s residence in McNamara, more than three years after the building took heavy damage in Hurricane Irma.

The repairs, along with a solar energy project at a school in West End, are the latest of a series of project rollouts from the Recovery and Development Agency that leaders said would prop up VI contractors and boost a shaky economy.

Kendol Arthur, owner of K&C Construction, signed a contract valued at $331,862.53 for the repairs during a ceremony late last month at RDA headquarters.

Premier Andrew Fahie explained that the structure “sustained significant damage, particularly to its roof, and the constant exposure to the natural elements led to further damage from rainwater ingress.”

The general deterioration of the structure since then will require additional work, he added, encouraging the construction company to complete the repairs “on time and within budget.”

The company, which also signed a contract in October for repairs on the Road Town Police Station, is expected to start work on Feb. 8 and complete it in five months.

After the tender process opened in September, K&C was selected over nine other bidders because it offered “the best value for money,” according to RDA Director of Procurement John Primo.

Mr. Arthur pledged, “We are willing to proceed and do as the RDA wants us to, and we are planning to make the RDA and the government of the BVI proud.”

The signing ceremony also saw Nea Talbot of Amandla Engineering receive a contract for $40,748 for the supply and installation of a solar facility at Leonora Delville Primary School.

“Not only as a local but as a female-owned company, I would like to acknowledge the great strides occurring in our territory,” Ms. Talbot said, adding that the project would work toward “advancing toward energy independence and a more resilient BVI.”

The 15-kilowatt system will be the second school-based solar grid-tie renewable system in the territory, after the one installed recently at Bregado Flax Educational Centre in Virgin Gorda.

“We have seen firsthand the importance of exposing our children to work that sustains our own well-being and that of our islands,” she said, explaining that the project would help get students to school sooner in the wake of natural disasters, while exposing young people to the growing field of renewable energy.

The repairs to the AG’s residence, according to the RDA’s project description, will feature a full replacement of the roof, structural elements, windows, doors, drywall, new kitchen cabinetry, closets, electrical, plumbing, air conditioning and exterior works.

The agency explained that the repairs would allow for the attorney general to be accommodated in a safe and secure neighbourhood.

The improvements will cut operating costs of the home and meet the requirements stipulated by the Eastern Caribbean Supreme Court for judges’ accommodations, according to the agency.

Sharleen Dabreo-Lettsome, permanent secretary in the Deputy Governor’s Office, said the house was one of many structures in the McNamara area to sustain “extensive damage” in 2017.

“Besides the AG’s residence, the judges’ accommodations and our own National Emergency Operations Centre were all rendered unusable,” she said, adding that the residence is among six to eight projects that the DGO is spearheading and that are now in various stages of completion.

Later this year, the list will expand, with improvements to the police marine base, the Anegada administration building and police station, and “other key public structures,” she said.

“The majority of these designs were in fact completed by the architectural unit within the Public Works Department,” she added. “If we estimate that a full recovery for moderate-type hurricanes, as what we experienced in 2017, takes at least five years, then I’d say that we are just past the halfway point for the benchmark.”

In July, the RDA announced a push to roll out as many as 20 projects worth a total of $40 million over the next two years, and CEO Anthony McMaster said last Thursday that the effort is starting to pay dividends, with $23.4 million of the total having been awarded and 89 percent of contracts going to locally based companies.

Meanwhile, the agency continues its efforts to build local capacity by nurturing talent, with at least four interns working with the RDA last quarter, he said.  Eight more students from H. Lavity Stoutt Community College are expected to begin this year.

Mr. McMaster said the agency intends to promote gender equity, noting that Ms. Talbot was the third female contractor to sign on to an RDA project. Many more will follow, he predicted.

“The population is probably around 50/50, so if we continue to go there and expect many, many, many more females to be signing contracts as we go forward, I wouldn’t be surprised if one of them is in the West End Ferry Terminal,” he said.

The agency announced this week that it is evaluating four design bids for that project.

The CEO added that much of the focus of this year’s projects will be on schools. “I think this year, our target is a little bit more ambitious because the premier has given us more ambitious projects this year,” he said. “So please be aware, corporate citizens, that we will be knocking on your door.”