Attorneys face off over D-4 seat

Attorneys faced off in High Court on Friday and Saturday over the validity of Mark Vanterpool’s short-lived attempt to resign from his position as Fourth District representative. The hearing is …

END_OF_DOCUMENT_TOKEN_TO_BE_REPLACED 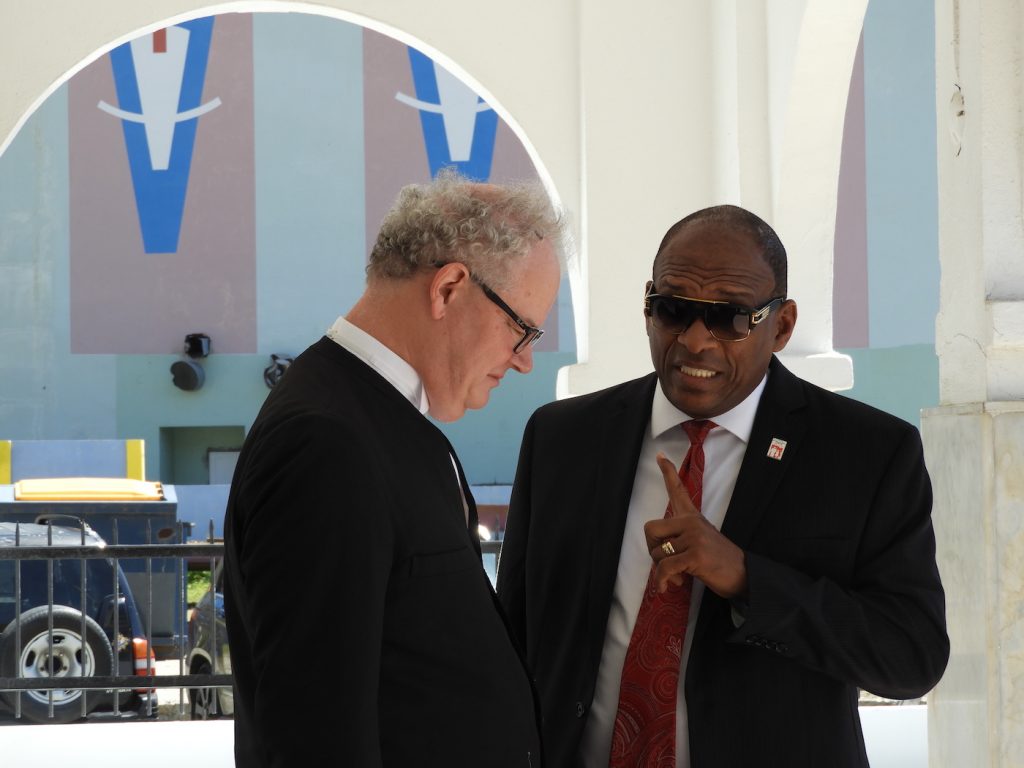 Mark Vanterpool, right, talks with his lead attorney, Edward Fitzgerald QC, outside of the High Court on April 13 in between sessions of the hearing to determine whether he will be able to take his seat as Fourth District representative. (Photo: GENEVIEVE GLATSKY)

Attorneys faced off in High Court on Friday and Saturday over the validity of Mark Vanterpool’s short-lived attempt to resign from his position as Fourth District representative.

The hearing is the latest chapter in the saga between Mr. Vanterpool and Speaker of the House Julian Willock, who refused to swear in the former communications and works minister after he reversed his decision to resign.

Mr. Vanterpool submitted two applications to the court: one seeking leave for a judicial review of Mr. Willock’s decision not to swear him in, and another requesting that the court declare that he did not resign and did not vacate his seat.

On Saturday Justice Ann-Marie Smith dismissed the former, saying that it was a matter for the legislature and not for the court.

She said on Saturday that her decision on the latter application was expected to come by today, but today at court she pushed the date to May 2.

Attorney General Baba Aziz made the opening submissions at the hearing, arguing that Mr. Vanterpool was entitled to take his seat as Fourth District representative, and that his resignation was not valid.

Mr. Willock was represented by Anand Ramlogan, who formerly served as attorney general of Trinidad and Tobago.

The other members of his legal team include former VI prosecutor Valston Graham, who is now the director of public prosecutions for St. Kitts and Nevis, Jared Jagroo, Christopher Joseph and Cherise Archibald.

Mr. Willock told the Beacon in a text message on Tuesday that government is paying for the legal expenses, but did not say what the projected cost is or if the funds are coming from the HOA budget.

He previously told the Beacon that he sought independent legal advice because he felt it was unfair for the attorney general to advise the speaker, the governor, and Mr. Vanterpool at the same time.

Throughout the hearing, Mr. Vanterpool’s senior counsel, Edward Fitzgerald QC, argued that Mr. Vanterpool could not have resigned because he was not yet a member of the House of Assembly, and the Constitution outlines a resignation process only for sworn members.

Mr. Ramlogan countered that Mr. Vanterpool was already a member of the HOA as soon as he was elected, citing sections of the Constitution that refer to representatives about to take the oath as “elected members of the House.”

However, Mr. Fitzgerald said that even if he were already considered a member his resignation still would not be valid because his letter of resignation was addressed to the clerk of the House and not to the speaker, as required by Section 67 of the Constitution.

Mr. Ramlogan put forth that prohibiting someone from resigning constituted a violation of the right to liberty, which includes the constitutional right to resign.

“Who can say the law prohibits someone from resigning from a job?” he asked.

If the day after the election a representative’s wife fell into a coma, he posited, would he not be allowed to resign to care for her?

To this Mr. Fitzgerald responded that the right to liberty also includes the “liberty to change your mind.”

He went on to say that the law does not prohibit someone from resigning: It merely outlines a process for them to do so.

“If all you need is 10 minutes to swear in and three minutes to write a letter, that’s hardly going to keep you from the bedside of your loved one,” he argued.

Mr. Ramlogan insisted that the process outlined in the Constitution was merely a formality.

“There is no need for someone to accept your resignation for it to be valid: It is a voluntary and personal act,” he said.

The two debated whether judicial review was the appropriate vehicle for the issue at hand according to Section 87 of the Constitution, which states that the High Court has the jurisdiction to determine an appeal regarding whether “any elected member of the House of Assembly has vacated his or her seat in the House or is required…to cease to perform his or her functions as a member.”

On this issue, Mr. Ramlogan also argued that the court did not have the jurisdiction to decide the matter and that the issue was “wholly inappropriate” for judicial review.

The ultimate remedy, he said, would be to turn the decision back to the people.

“It is their decision,” he said. “It is not an impasse without a resolution, it is a political solution.”