The Premier’s Office “deliberately resisted” providing information on “excessive amounts” spent on the Covid-19 farming and fishing stimulus despite numerous requests from Auditor General Sonia Webster, she told the Commission …

END_OF_DOCUMENT_TOKEN_TO_BE_REPLACED 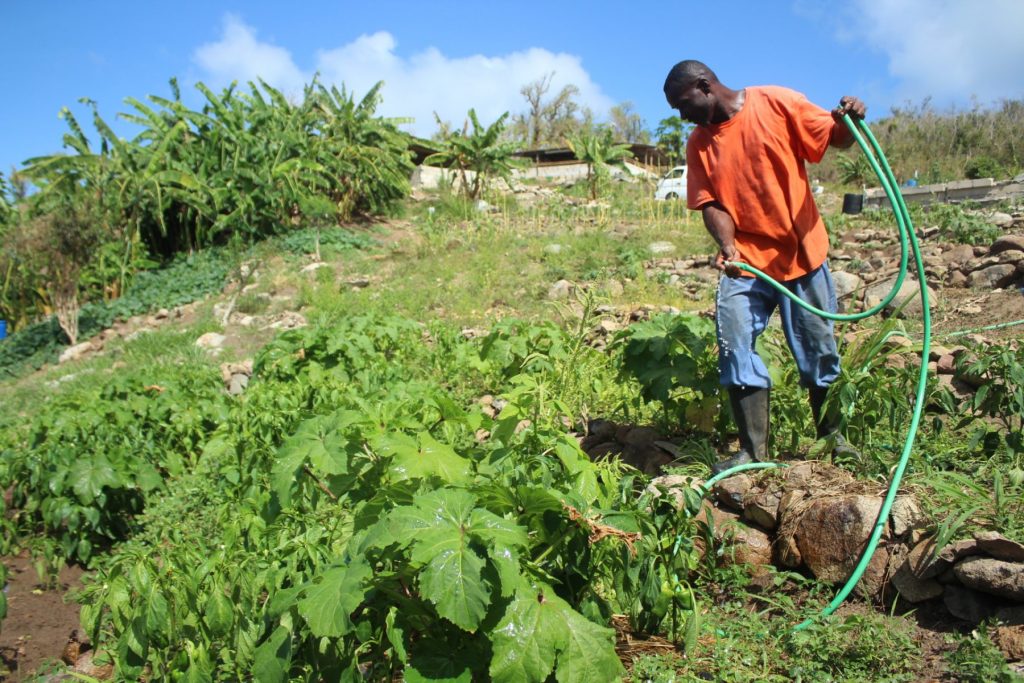 The Premier’s Office “deliberately resisted” providing information on “excessive amounts” spent on the Covid-19 farming and fishing stimulus despite numerous requests from Auditor General Sonia Webster, she told the Commission of Inquiry on Monday.

“This is public spending,” Ms. Webster said. “You do not have a right to withhold information where it respects government processes and government activities. Our job is to look at those documents. Our job is accountability and transparency. In this case, there was an absolute absence of transparency coming out of [the Premier’s] Office.”

The stimulus programme was among several topics the COI covered with Ms. Webster, whose appearance lasted for the full-day session on Monday and then continued into Tuesday.

The commission also asked about annual audits that have been missing since 2017 and about her previously published reports on several government projects, including the Neighbourhood Partnership Project and BVI Airways.

Much of the information she discussed had already been aired through her published reports, but her investigation of the stimulus grants was different: That report had not been published, and her testimony on the programme’s lack of transparency drew outraged comments on social media even as she spoke.

Premier Andrew Fahie has insisted that the farmer and fisher grants were awarded based on need and applicants’ detailed requests.

Regardless of need or request, “excessive” payments in various amounts were made to farmers and fishers, according to Ms. Webster’s report, much of which COI Counsel Bilal Rawat read aloud during the hearing.

In some cases, farmers received almost $13,000 more than they requested, and 18 people received both types of grants for a total as high as $42,500.

About half the farmer grant recipients weren’t registered as farmers at the Department of Agriculture, and more was paid to unlicensed fishers than licensed ones, according to the report.

The Premier’s Office didn’t cooperate with the auditor general’s requests for information on the farmer and fisher programme, which it administered, excluding the Department of Agriculture and Fisheries and the Ministry of Natural Resources, Labour and Immigration, according to the report.

Though the auditor general’s team obtained some information from the Ministry of Finance and other agencies, it was “unable to obtain the relevant files” from the Premier’s Office, which were “repeatedly requested by email and telephone,” according to parts of the report read aloud by Mr. Rawat.

“The refusal to present this information is in direct contravention of the VI Constitution and the Audit Act, which provide for this office to have access to government documents and records,” Ms. Webster wrote in the report. “No public officer expending public funds has the authority to deny information requested for audit purposes.”

Asked by the COI about her attempts to obtain information from the Premier’s Office, Ms. Webster said at first there was no response at all.

Later, she said, she was told the Premier’s Office couldn’t provide the documents because an internal audit was in process.

In response, she argued that her investigation wouldn’t get in the way of the internal audit, but she was still not permitted to access necessary documents, she told the COI.

“We had to undertake this [audit] without getting information from the Premier’s Office,” she said. “I believe it was a deliberate attempt to prevent the office from getting the information in order to do this [audit].”

Ms. Webster also noted that her access to documents for a separate investigation into small business grants was revoked by the Premier’s Office.

The farming and fishing stimulus was first announced by Deputy Premier Dr. Natalio “Sowande” Wheatley in March 2020, before any other pandemic stimulus initiative.

It was promised at the time that $2 million would be given in grants to farmers and fishers who are belongers or permanent residents registered with the Department of Agriculture or carrying a fishing licence, Ms. Webster wrote in her report.

The budget later was changed to $3.5 million without notice, she added.

The application period was advertised to run from June 5 until July 10, 2020, and payments began in October, according to the report.

“Against the budget of $3.5 million, treasury records indicate that the total amount paid out to the farmers and fisherfolk stimulus programme was $5,140,000,” Mr. Rawat read aloud.

Under the farming stimulus, 203 payments were issued, the report noted. Ms. Webster found that 49 percent of the money paid to farmers, totalling $1,437,000, was given to people who were not registered as farmers with the Department of Agriculture.

“There is the possibility that there were affidavits indicating that those people were farmers for at least three years given to the Premier’s Office,” she said. “They’re supposed to be commercial farmers where farming is a part of their livelihood.”

She was told the Department of Agriculture did not choose the recipients, she explained, so she sought the information on the selection process from the Premier’s Office, which did not provide it.

Ms. Webster’s office also undertook an on-the-ground investigation with a sample of farmers, according to Mr. Rawat.

Staff went on 22 site visits to verify that those who received grants had commercial farms and met the requirements of the stimulus, the report stated.

Eleven of those sites, however, could not be located by the Department of Agriculture and Fisheries.

Of the remaining 11 farms, seven were on government property in Paraquita Bay, and four were on private land. Two of those showed farming activities that didn’t meet the scale of commercial farming, she reported.

She also found that the money given to many farmers was not equal to the amounts requested in their applications.

“The amounts requested by farmers were inflated by the [Premier’s Office] prior to payment,” Mr. Rawat read aloud. “This resulted in payments substantially greater than requested.”

In a sample she investigated, 70 people reportedly requested a total of $351,730. They received just over $1 million, almost three times the value of the requests.

The auditor general found no evidence of an assessment of the applications that required applicants to list their needs and monetary requirements, the report added.

Ms. Webster again sought information from the Premier’s Office without success, she said.

Ms. Webster also fielded questions on several other topics during her appearance.

Shortly after her hearing started Monday morning, COI Counsel Bilal Rawat turned to a section of a 2016 report describing the functions of her office, including her responsibility to prepare annual audits of government’s accounts.

However, she noted that her ability to carry out the required annual audits of government accounts depends upon receiving financial statements from the Treasury Department.

Other audits that her office can perform are outlined under the Audit Act, 2003 and include reviews of specific government-funded projects and pro- grammes.

“The challenge with those, though, is that they do tend to take a longer period of time to complete, and they do involve a lot of back-and-forth with the entities that are being audited,” Ms. Webster said. “Basically, it’s where we consider there’s a high risk of something going wrong.”
She also described other circumstances for which her department would submit a report, like when a criminal offence has been committed.

Mr. Rawat then took a more in-depth look at the annual government finance audits from 2008 to 2015.

He pointed out significant delays in certifying the results of the “annual” audits. In the case of the audit for 2012, the Auditor General’s Office didn’t receive final revised account reports from government until August 2017, which then-acting Auditor General Amoret Davies certified and sent to then-Premier Dr. Orlando Smith in January 2018, Mr. Rawat said.

She added that often the financial statements are delayed because when her office receives them they have “significant issues that need to be addressed,” like omitted financial disclosures.

Her office must then refer them back to the accountant general for a correction process that often takes a long time, she said. She agreed with Mr. Rawat that years-long delays are inappropriate.

Ms. Webster noted that many of the overdue financial statements were submitted to her office in 2017, around the time of Hurricane Irma. The audits needed to be completed while government worked to secure recovery funding, which was part of the reason she came out of retirement to help her office, she explained.

Many of the delays from the accountant general seemed to come down to a lack of resources, she said.

She also noted that before her 2015 retirement, her office received statements from the accountant general that were purported to meet international reporting standards but “fell way short” and couldn’t be certified.

Ms. Webster said her office has come under criticism for late audits, but she said it’s simply not possible to provide a certified audit without complete financial statements from the Treasury.

COI Commissioner Sir Gary Hickinbottom agreed, saying, “You have nothing to audit.”

She did give credit, though, to acting Financial Secretary Jeremiah Frett for taking measures to make the department more effective, including bringing in a consultant.

The auditor general confirmed that there are no certified annual government audits for 2017 to 2020. She said her office sent 2017 financial statements back to the accountant general twice for revisions but had not heard back on the latest request.

Under the Constitution and Auditor General Act 2003, Ms. Webster’s office is an independent entity given broad powers to access information.

“There has been a trend of late — and it hasn’t always been this way — over the past 10 years where ministries and departments are resisting providing information that is required for audit,” she said, noting that she plans to report to the governor about an office attempting to use its history of noncompliance to justify not reporting to her. “It was a blatant attempt at manipulating the entire process.”

She said she believes much of the resistance comes down to public officers attempting to protect government ministers.

“I know of a couple of cases where the instructions came from the ministers to not provide information,” she said, noting that those instances occurred more than five years ago.

Ms. Webster said an important step to improving the situation is updating the 2003 act to include penalties for non-compliance.

The commission also explored the auditor general’s reports on special projects as well, including the Virgin Islands Neighbourhood Partnership Project for which Mr. Skelton-Cline received more than half a million in contracts; a 2015 report on a programme designed to assist people with import duties; and the Sea Cows Bay Harbour Development Project investigated in 2014.