Autland Heavy Equipment, a Virgin Islands firm, has been awarded its seventh contract from the Recovery and Development Agency by beating out eight other local bidders to win a $1,799,499.68 …

END_OF_DOCUMENT_TOKEN_TO_BE_REPLACED 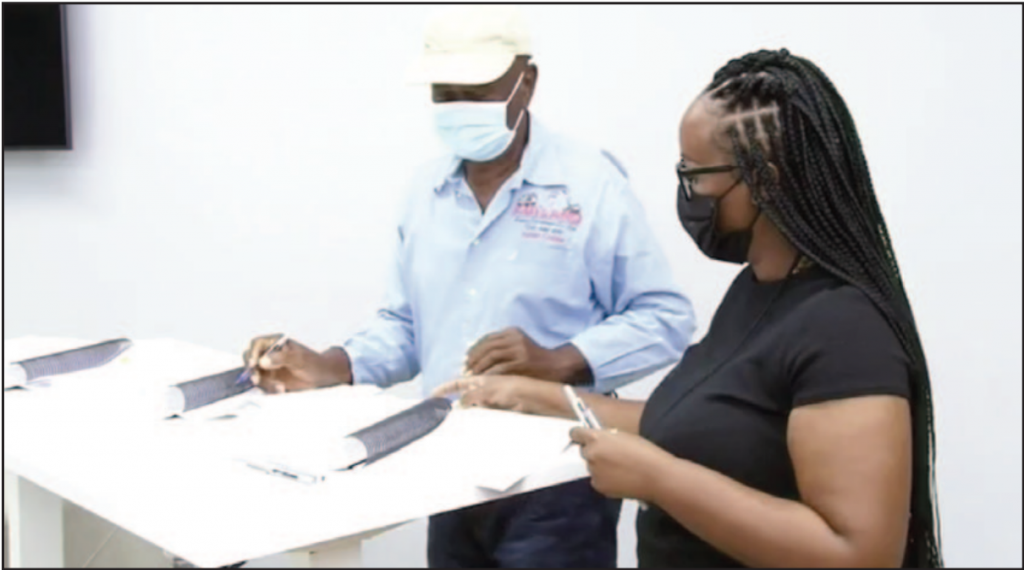 Autland Heavy Equipment, a Virgin Islands firm, has been awarded its seventh contract from the Recovery and Development Agency by beating out eight other local bidders to win a $1,799,499.68 deal for road rehabilitation and slope stabilisation works in Long Trench.

Autland has been awarded six other contracts for road repair and other projects since May 2020, for a total of $8.2 million. In a livestreamed signing ceremony on Aug. 11, Autland representative Dawn Crabbe-Herbert thanked the RDA for its efforts in reaching out and training VI contractors, which she said allowed her firm to successfully bid on so many projects.

She also promised to deliver the project on time and on budget. “We have been working on [Caribbean Development Bank]=projects from inception and have benefited from the capacity-building efforts of the RDA and  their many trainings,” she said. “We have been able to pass on
this benefit to many subcontractors and the development of resilience building of our staff and other Virgin Islanders.”

The project was put out for bid in April, according to RDA Head of Procurement John Primo. Autland was ultimately selected from among 14 local contractors based on “best value for money,” Mr. Primo said.

The project, which consists of 125 metres of reinforced concrete works, two retaining walls, and the installation of 225 metres of guard rail, is expected to be completed within four months of the start date, he said.

Autland won previous contracts for road repair projects at Ballast Bay and at two different sites on Great Mountain, and for rehabilitation works to three water systems in Carrot Bay, Long Bush and Zion Hill. The value of all seven contracts together is $8,217,887.91.

Premier Andrew Fahie said he was pleased at the number of construction projects awarded through the RDA and funded through the $65 million CDB loan in the past year to boost the local economy as it struggles through the Covid-19 pandemic.

“Today, the vast majority of this money that was expected to leave this economy now passes through our economy, and businesses and workers from different sectors of the economy are not being pushed aside or disadvantaged from being able to access the benefits of this cash  flow,” he said.

The premier also praised RDA CEO Anthony McMaster’s comment that about 80 percent of the RDA projects have been carried out by local
contractors.

“This indeed shows that we are a government that cares to make sure that we negotiate that our people will be able to benefit more from these types of projects,” Mr. Fahie said.

The RDA already had $25.5 million worth of projects under way, Mr. McMaster said at the ceremony, noting that Aug. 11 also marked the reveal of a $1 million design contract signed with a German firm for the West End ferry terminal.

“And now we’re about to sign a second contract, valued at roughly $1.8 million, bringing our total contracts to … $28.3 million,” he said. “And I think  that’s quite a substantial amount of money being injected into the local economy over the last few years, especially with the constant threat of Covid upon us.”

He cautioned that as a result, the next few weeks will kick off two major road construction projects, starting with paving in six different areas.

“We don’t expect those to be too disruptive to the motoring public, because those are basically short duration segment contracts,” he said. “However, the biggest road rehabilitation project that we’re expected to undertake at the RDA will be the Fish Bay rehabilitation project, which basically is the main artery between central town and the eastern section of town, which is the most inhabited area of the island.”

This project has the potential to be disruptive, he said, adding that the agency would strive to provide as much notice as possible before it starts in the “next few weeks.”

During last Thursday’s House of Assembly sitting, a statement from Transportation, Works and Utilities Minister Kye Rymer provided a related update about the state of major roadworks that have gotten
under way under the CDB loan.

The statement, which was read by the premier in Mr. Rymer’s absence, explained that construction crews have been able to “substantively complete” six of eight projects from the post-2017 National Road Reconstruction Programme.

This includes the full reopening of Great Mountain Road last May, he stated.

“[Motorists] have been assured that flooding and landslide  issues have been massively curtailed following the installation of retaining wall structures and a massive culvert, increasing the drainage capacity,” Mr. Rymer stated.

He added that safety was also improved by widening a blind corner and reducing the road gradient. The final stage of asphalting is scheduled to start this month.

Crews also completed work on four sites along Ridge Road, according to the minister. He added that a badly undermined section of Hope Hill and Sabbath Hill was “fully rehabilitated” as of last March.

Workers also finished fixing drainage issues along Little Dix Hill Road and only have to install a final section of steel barrier at the site and asphalt over the old and new sections of road, he stated.

Near Bob’s Gas Station in District Six, a contractor completed retaining wall and drainage works and will continue to work on a new culvert connection, according to the minister.

He noted difficulties in procuring steel for building the final drain overlays needed to complete the project but anticipated it would be done by next month.

Mr. Rymer called the District Two Ballast Bay road project a “mammoth engineering and construction achievement for the BVI,” which was finished and reopened last April. This included new guardrails to address safety concerns, as well as  widening a culvert to better handle water from the ghut and make room for two cars to pass.

In addition to the work on Long Trench, more major road construction is on the horizon. Mr. Rymer stated that the biggest project to date will start next month along the flood-prone Fish Bay road, which “has been in disrepair for years” due to drainage issues. He said government was finalising CDB approval for the contractor.

“I am happy to announce that this area will receive complete road rehabilitation,” he wrote.

Mr. Rymer said planners would be in contact with businesses about these future works, and he thanked all residents for their patience with the major road works amid highly traversed areas.

“I agree it has been a long and sometimes frustrating process, but a necessary process because your government is not about quick fixes but is committed to building a strong, resilient, safe road network through proper designs, construction and regular maintenance,” he stated.