Sports > Back into the swing of things

Back into the swing of things

Some of Bria Smith’s early memories of playing softball were in primary school with a broomstick and tennis ball. “It was our little way of bush ball, but it was …

END_OF_DOCUMENT_TOKEN_TO_BE_REPLACED 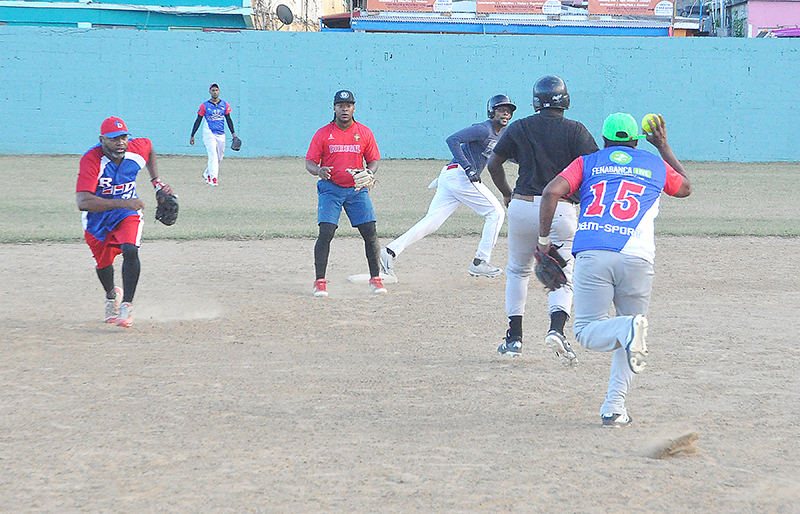 Photo: FREEMAN ROGERS Softball players on the Storms and Los Macarrecios (blue and red) play a preseason game on Saturday evening at the Long Bush field. The official league is slated for Sept. 5, the first time it has been held since 2017. Photo: FREEMAN ROGERS

Some of Bria Smith’s early memories of playing softball were in primary school with a broomstick and tennis ball.

“It was our little way of bush ball, but it was the foundation of softball,” Ms. Smith said, who is the secretary general of the BVI Softball Baseball Association. “It’s part of who we are; something that we’ve always done and it brings us together.”

As an organiser and player in the BVI fast pitch softball league, Ms. Smith said the sport is part of the “BVI fabric” and it is imperative that the league continues despite the many setbacks it has faced in recent years.

“It’s a sport that you have to find a way to work together,” Ms. Smith said. “And that’s one of the things we want to instill in our youth and in our community.”

Since 2017, the league has been on hiatus, but is now slated to start on September 5.

The league will be named in honour of the former teams Astros and Atoms. In addition, Rufus “Sleepy” Malone will be awarded for his years of contributions to the sport, according to the secretary general.

During the past several weeks players and organisers have already started to warm up for the league with preseason games at the Long Bush field.

“Those games began because we had got our field up and somewhat running right before the lockdown,” Ms. Smith said. “After the lockdown, a few of the players just kind of went back on the field. It was probably like three of them on the field just practising and trying to break off some of the rust and stuff. They had missed the field so much that they just wanted to play.”

The secretary general said the preseason games have been more relaxed with players competing in their street clothes and no stats being kept. However, competitiveness was still in the air.

“It always gets a bit competitive with the trash talking, but we love it,” Ms. Smith said. “It makes things exciting and gets you going.”

On Monday, organisers have taken more steps to get the community involved in the league, including reopening registration to allow teams to add or change their roster. Prior to the lockdown, a team from St. Thomas committed to playing in this year’s league, but due to the Covid-19 pandemic the USVI team will no longer be competing in the upcoming league.

On Aug. 1, organisers will be hosting a pre-season tournament featuring teams from the leagues.

“If teams don’t want to play in this preseason tournament that’s fine, they can just take this time to prepare themselves for when the league begins,” Ms. Smith said. “But this is just for us to continue playing and get ready for the league.”

This year’s league features four women’s teams, including the defending champions That’s Your Problem. The other teams are Synergy, Lady Hawks and Warriors.

“The Warriors are here every single year,” Ms. Smith said, who plays for Synergy. “We have to really commend them, because they’re very consistent.”

For the men, there are five teams including the reigning champions Power Outage. The other teams include the Pirates, Storms, Hot Shots and the Los Macarrecios, which is fielded entirely by Dominican Republic players living in the VI.

“We have a new team by the name of Storms,” Ms. Smith said. “Alan “Woodrow” Smith, who was the pitcher for the Pirates, has broken away and created the new team with a mixture of old players and young players.”

It has been an uphill battle for softball in the territory since the passing of Hurricane Irma almost three years ago, which left the Long Bush softball field in shambles. A large portion of the concrete outfield wall was knocked down, the scoreboard was damaged behind repair and the concession stand and seating were destroyed.

“We had to literally start from scratch,” Ms. Smith said. “And it’s taken some time to get things organised.”

Ultimately, organisers hope the field can be restored to international standards in hopes of hosting tournaments. Meanwhile, some temporary fixes have been put into place to get players back on the field, including fencing in the outfield and wooden bleachers that were used for the August Monday Emancipation Festival Parade.

Ms. Smith credits several volunteers for cleaning up and restoring the Long Bush venue, including the VI government and the BVI Electricity Corporation for helping to get the lights back up and turned on.

“Now we have to do some work on positioning the lights in the appropriate location so that the entire field is lit up properly,” Ms. Smith said.

Recently, the field was the target of vandalism. Plywood was stolen and a large section of netting was cut from the backstop.

“We don’t know who did it or what they used it for but these are some of the setbacks that we’ve had,” Ms. Smith said. “But we’re still hopeful and we’re still trying to keep things going forward.”

The BVISBA is led by President Terrance Chinnery; Vice President

Glenford “Chappy” Maduro, who is also the chief umpire for the league. The second vice president, who is responsible for women’s softball, is Rose Adams. The public relations officer is Shamora Molly Penn, who plays for the Lady Hawks. The players’ representative is veteran Allen “Woodrow” Smith and the assistant secretary is Sarah Potter-Washington.

“There is still work that needs to be done,” Ms. Said. “But I’m pleased we can actually have a league, that we know it would be somewhat safe for our players because that’s one of the things that we are very focused on. We want to make sure that if we hold the league that our players are protected and our fans are protected as well.”

The league is also in need of umpires, said the secretary general.

“We’re encouraging persons who have some general knowledge of softball and the rules and guidelines to come out and learn to be an umpire,” said Ms. Smith. “That’s one of the most important roles in softball today. They control the game; they make sure that our games start on time. … We really need more umpires right now especially younger persons, we want to continue to do some proper succession planning.”