Levansky Favila de Venecia doesn’t buy vegetables. Instead, he goes into his backyard garden and picks them. Though he doesn’t sell his wares at a formal market, he does good …

END_OF_DOCUMENT_TOKEN_TO_BE_REPLACED 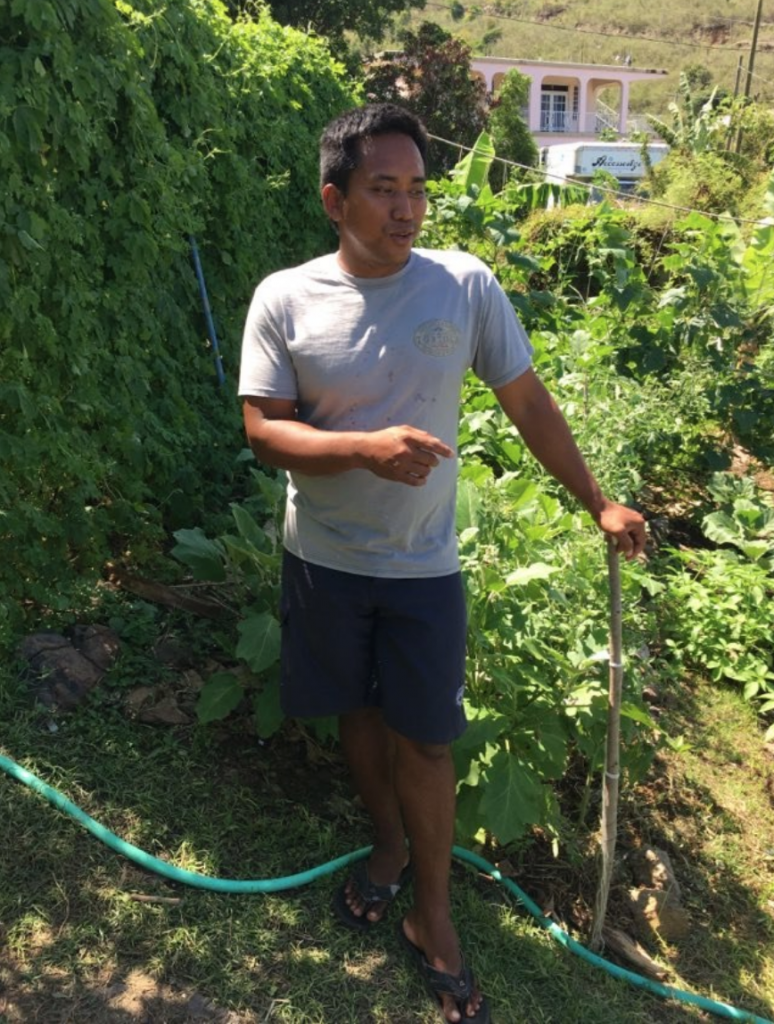 With the help of his family, Levansky Favila de Venecia has covered the hill behind his house in all kinds of produce, from rosemary to tomatoes. (Photo: JOEY WALDINGER)

Levansky Favila de Venecia doesn’t buy vegetables. Instead, he goes into his backyard garden and picks them.

Though he doesn’t sell his wares at a formal market, he does good business advertising his produce on community Facebook pages. Across the street from his house, a landlord in his Sea Cows Bay neighbourhood has lent him some land to grow more okra on the condition that he gets a portion of the produce when it’s time to harvest.

Now, Mr. Venecia is one of 87 residents taking part in a friendly competition that seeks to promote “food security and community exchange” across the territory.

“A well-planned garden can provide healthy, nutrient-rich food for your family. We have many avid backyard gardeners in our territory, and we hope that this competition will help to inspire others to take up food gardening as a serious hobby,” Education, Culture, Youth Affairs, Fisheries and Agriculture Minister Dr. Natalio “Sowande” Wheatley said when the contest was launched in April.

Beginning next month, a cohort of judges will fan out across the territory to inspect the participants’ plots, said assistant secretary Tessa Smith-Claxton.

The judges, who will include ministry officials and community members knowledgeable about gardening, will grade the plots based on specific criteria.

Besides gauging the overall aesthetic of each garden, they will consider whether the gardener used sustainable practices and nursed plants that attract pollinators and other wildlife, according to the official rules.

Judges will also ask the competitors a question: “Does your garden inspire others within the community?”

Prizes for best backyard garden, best container garden, best garden photo, and best youth photo will be announced on World Food Day on Oct. 16, according to the ministry.

The idea for the contest was sparked by a suggestion from Deputy Speaker of the House of Assembly Neville Smith, who suggested launching a competition to stoke interest in gardening in the VI, which was “consistent with the department’s goal of trying to get more persons involved,” Dr. Wheatley said in an interview.

According to the minister, the competition comes amid an “insurgence” in interest in farming amongst residents, which already was under way before the coronavirus pandemic reached the territory but then got a boost from the outbreak.

He plans to make the gardening competition a yearly event, and eventually wants to bring back the Farmers Week exhibition, he said.

Like Dr. Wheatley, Mr. Venecia also noticed a spike in interest during the pandemic.

With the territory cooped up at home and with food suddenly scarce for some, residents turned to planting fruits and vegetables as a means to cure their boredom and gird against future instances of food insecurity, he explained.

But in his view, this surge has not been sustained.

Once the curfew eased and people gradually began returning to work and to social events, many residents let their green-thumb habits fall to the wayside, he said.

Many don’t have the excess time and patience they had during the curfew, as they now must work to make up for the salaries lost during that period, he said.

Mr. Venecia, however, is as attentive to his garden as ever, with every member of his family pitching in to work the soil and water the plants.