Cecil “Alex” Jeffries was standing on the tarmac of an airport in the Bahamas on Monday, and over the whir of jet engines and shaky cell reception, it was hard …

END_OF_DOCUMENT_TOKEN_TO_BE_REPLACED 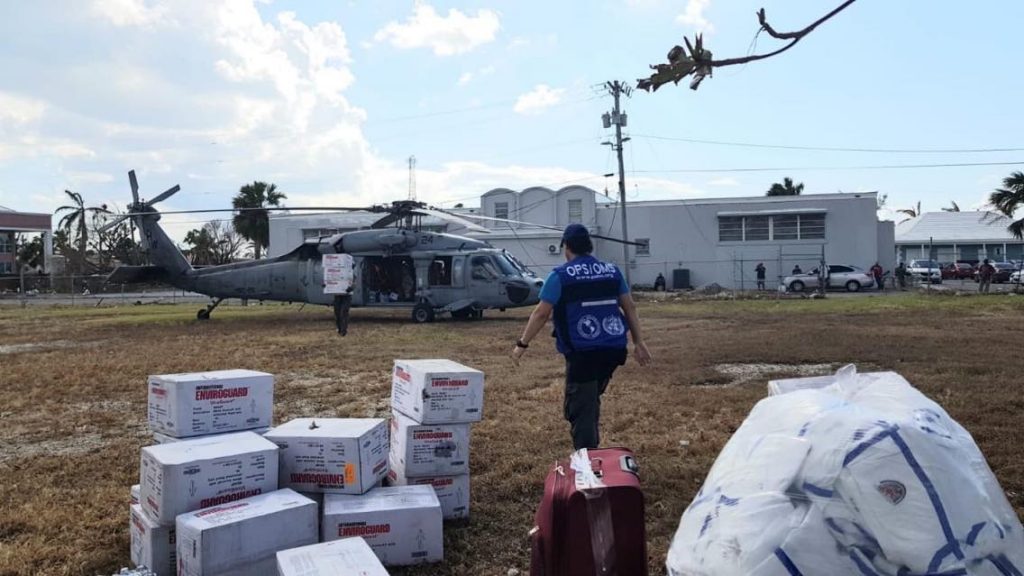 Recovery officials unload supplies from a helicopter in the Bahamas. Two officers from the Department of Disaster Management are there to help. (Photo: CECIL “ALEX” JEFFRIES)

Cecil “Alex” Jeffries was standing on the tarmac of an airport in the Bahamas on Monday, and over the whir of jet engines and shaky cell reception, it was hard to hear what he was saying.

A logistics expert, Mr. Jeffries, the Department of Disaster Management’s community relations officer, flew to the Bahamas shortly after Hurricane Dorian devastated the northern part of country, lending his knowledge to help residents recover from the wreckage the storm left behind.

Now, Mr. Jeffries is working to ensure that all donated medicines get where they need to go, logging the medicines’ place of origin and tracking them until they reach their destination.

While he pitches in on the ground — along with DDM Deputy Director Dr. Evangeline Inniss-Springer, who is working with multiple relief agencies in the Bahamas — scores of Virgin Islands residents are doing what they can to help after Dorian flattened communities and left dead bodies scattered amongst the rubble.

“They are feeling the way that we felt,” Mr. Jeffries said, adding, “It’s good to show that support as much as we can.”

The territory’s Rotary clubs organised one of the highest-profile efforts to raise funds for the Bahamas, hosting a telethon Tuesday night, raising about $138,000.

“Our effort continues to ensure that we have an organised effort to help those in need,” said Vance Lewis, former governor of Rotary’s District 7020, which includes the VI.

The BVI Red Cross is also raising funds. As part of its Red Bucket Appeal, the organisation has dispatched employees to public spaces on Tortola, Virgin Gorda and Anegada, with the goal of filling their red plastic buckets with money to be sent overseas.

By Tuesday, it was not clear how much money the nonprofit had raised so far, as the volunteers were still out collecting donations, said Branch Support Manager Peter Lombas.

However, the Red Cross intends to continue the appeal for the next month and maybe longer, Mr. Lombas said. The organisation will donate 100 percent of funds it raises toBahamian chapters of the RedCross, Mr. Lombas said.

Collection points for donated dry goods have popped up across the territory, and while these are being managed by different groups, all of the collected materials can be transported to the Bahamas via a barge that will be coordinated by the Ministry of Health and Social Development, said Chrystall Kanyuck-Abel, DDM information and education manager.

As of Tuesday afternoon, the ministry was still finalising details such as when the barge will leave for the Bahamas, whether the ministry will facilitate a session dedicated to sorting through the goods before loading them, and whether more than one barge will be necessary, Ms. Kanyuck-Abel said.

Meanwhile, VI Search and Rescue is working to coordinate volunteers and fundraise for items requested by the Bahamas Air Sea Rescue Association, and in the coming months may send volunteers to support BASRA’s efforts.

The Lions Club of Tortola is collecting supplies as well, though donations have been slow so far in part because of insufficient public relations, said Maria Vieira, president of the club.

Until members receive word that it is time to ship off the donated items, the club will continue to operate its two collection centres, on Tortola and Virgin Gorda, Ms. Vieira said.

“We are just trying to support the effort, for the supplies aspect of it,” she added. The club is also working with Darryl Flanders, who has asked residents to bring goods to the ZBVI Radio station in Baughers Bay, to ensure that all of the supplies make it onto the barge and over to the Bahamas, Ms. Vieira said.

Ms. Kanyuck-Abel emphasised that residents should only donate items that the Bahamas government has said are necessary, as unneeded donations could cause back-ups at the ports and otherwise hinder the relief effort.