Full-service banking has finally returned to Virgin Gorda with the opening of a Banco Popular branch, which Premier Andrew Fahie called an “auspicious” occasion for residents who have been without …

END_OF_DOCUMENT_TOKEN_TO_BE_REPLACED 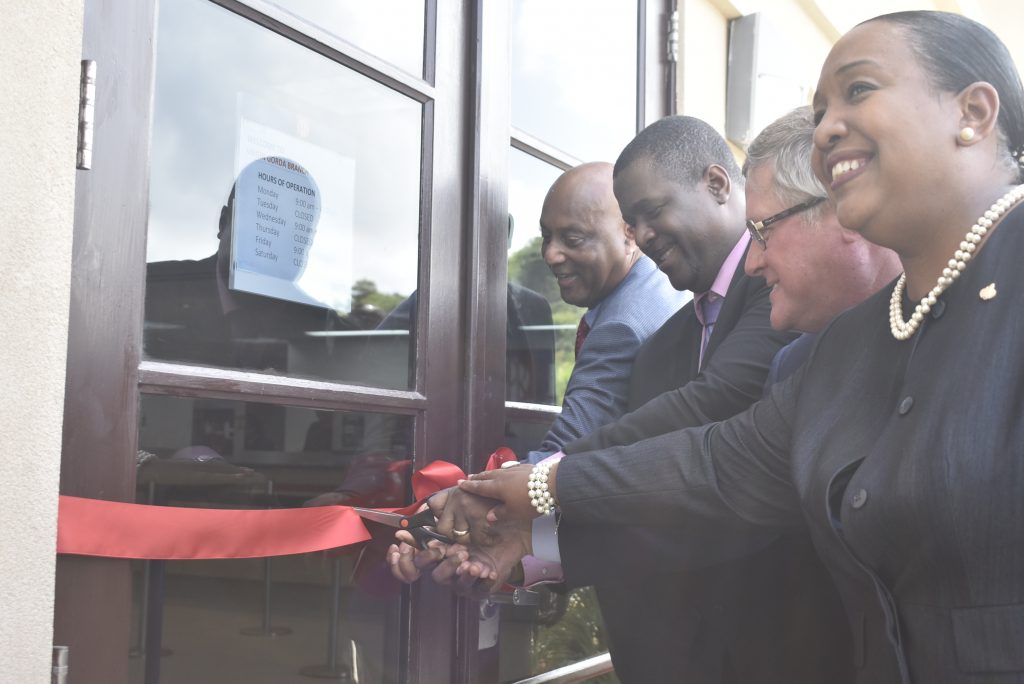 Full-service banking has finally returned to Virgin Gorda with the opening of a Banco Popular branch, which Premier Andrew Fahie called an “auspicious” occasion for residents who have been without a physical bank for months.

“Over the past months, you, the people of Virgin Gorda, shared some of the inconveniences being experienced, such as having to pay close to $100 in transportation fees via ferry and on land upon arriving, as well as other expenses that were incurred just to change a $150 cheque [in Tortola],” Mr. Fahie said at the ceremony. “It’s an insult to the people of Virgin Gorda given that Virgin Gorda has always been one of the main driving forces of the BVI’s economy.”

Besides operating a 24-hour ATM machine, the bank is open on Mondays, Wednesdays and Fridays from 9 a.m. to 4 p.m., providing on-the-ground services that VG residents have lacked for more than a year.

Music and balloons filled the parking lot of the bank, and although there was still work being done to the outside of the building, the opening ceremony took place with speeches by Banco Popular employees and government officials.

“It is indeed a beautiful day in paradise, and I am proud to be here at this time and in this moment to celebrate the culmination of many, many, many months of planning,” said Banco Popular District Manager Oran Roebuck.

Residents watched the opening of the bank from near and far, chatting amongst themselves and exclaiming, “The bank is opening today?”

The premier took the opportunity to thank former Premier Dr. Orlando Smith and the previous administration for its efforts.

He explained how Tortola residents would witness Virgin Gorda workers catch ferry rides and run to the bank to try to change their cheques before getting the next ferry back. He also described how Virgin Gorda business owners felt a “heavy sense of insecurity” having to keep large sums of money in their homes and businesses.

After the ceremony, the branch opened for the day and workers welcomed customers.

As Roseanne Young and Patrice James, consultants at the branch, were catching the last ferry to Tortola, they reflected on the day.

Ms. Young recalled that all the transactions for the day went smoothly, and felt positive for the future.

“Overall, the day was a success,” she said.

They will be commuting to the branch from Tortola three days a week.

VG was without full, on-the-ground banking services after a series of closures.

CIBC FirstCaribbean closed its VG branch in November 2017, and Scotiabank followed in September 2018 after announcing that it would refocus its operations on digital banking.

That left only limited automatic teller machine services on the island.

Banco Popular, which is headquartered in Puerto Rico and has branches in the United States, Caribbean, and Latin America, hasn’t been the only candidate for opening a branch on VG, however.

National Bank of the VI

At the time that Scotiabank closed, Dr. Smith announced that he was speaking “urgently” to National Bank of the VI Chairman Clarence Faulkner about bringing services to the sister island.

The idea of Banco Popular opening in VG first surfaced in July 2018, when then-Ninth District Representative Dr. Hubert O’Neal announced in the House of Assembly that Banco Popular was considering opening a branch there, and later toured the island with representatives from the bank.

At the time, Dr. O’Neal said in a press release that the branch could open in a matter of weeks.

In August 2018, when no bank had yet opened, NBVI issued “Fast Passes” to residents of VG and the other sister islands after CEO Joy Francis visited VG, Jost Van Dyke and Anegada and quizzed residents about their needs.

She said one of the most common complaints she heard was all the time they had to spend waiting at the bank, when they had numerous errands to run during trips to Tortola.

“The Fast Pass addresses this issue and gives us a chance to serve our sister island clients better,” she said at the time.

Sister Islands Coordinator Sasha Flax, who was not involved in the negotiations, said in April, “With the sister islands based on tourism and hospitality … we need banking to be able to function properly.”