Local News > After months of questions, basic details given about one Irma fund

After months of questions, basic details given about one Irma fund

This article originally appeared in the Beacon’s print edition on Nov. 1. A few days after Hurricane Irma devastated the Virgin Islands last September, the BVI Tourist Board launched an …

END_OF_DOCUMENT_TOKEN_TO_BE_REPLACED 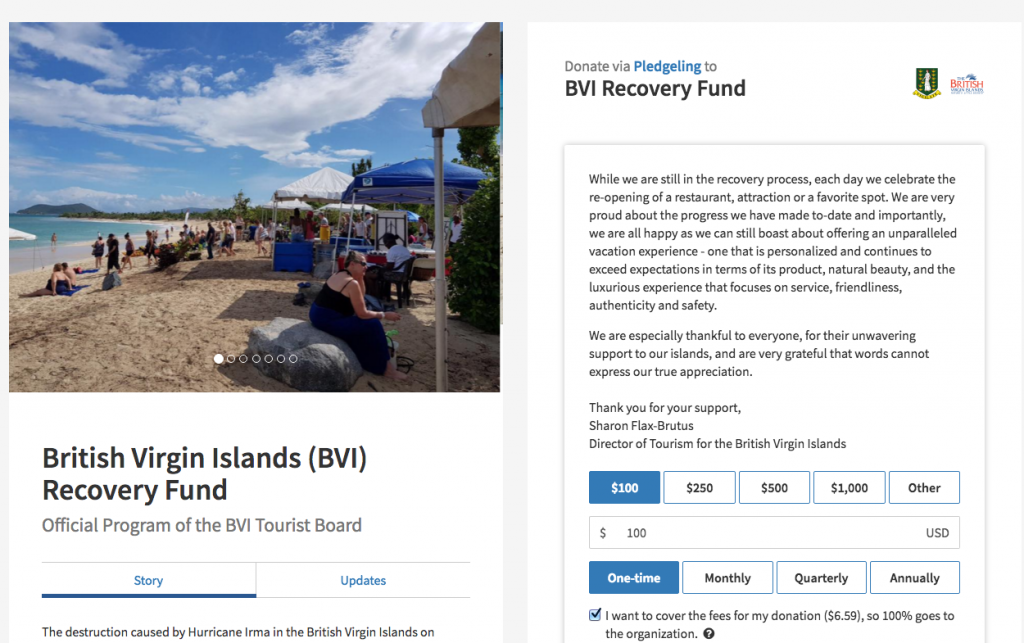 The BVI Recovery Fund, government’s “official Irma relief fund,” has reportedly amassed about $116,000 in donations. None of it has been spent. (Photo: SCREENSHOT)

This article originally appeared in the Beacon’s print edition on Nov. 1.

A few days after Hurricane Irma devastated the Virgin Islands last September, the BVI Tourist Board launched an online crowdfunding page to gather money from well-wishers around the world.

But for more than a year, officials didn’t say exactly how much money the fund had raised or whether any of it had been spent.

Finally, after months of questions to several government officials, Brodrick Penn, chairman of the Disaster Recovery Coordination Committee, gave the Beacon a few details about the account on Monday after criticising past Beacon coverage on Irma donations and urging this reporter to write a “positive” story.

About 693 separate donors have given a total of roughly $121,000 to the BVI Recovery Fund, Mr. Penn said. After Pledgeling administrative fees are taken out of that total, net proceeds are about $116,000, he said.  None of that money has been spent to date, though government will direct future spending priorities, he added.

The most recent details from Mr. Penn emerged after repeated delays in government officials’ promise to provide comprehensive information about millions of dollars worth of donations and gifts that have been given towards the territory’s recovery effort.

Mr. Penn, however, said this information is coming soon: He and his team were recently enlisted to compile a “donor’s report” and help create a “comprehensive picture” of all donations for the media, he explained.

“There’s a sense that the BVI has raised tons of money for the recovery, but it’s just not true,” he said. “We’re doing a proper and full accounting of everything that has been raised, and government will fully account for it to the donors, the public and the media.”

In late June, the Beacon first attempted to learn how much money had been raised by the official BVI Recovery Fund.

Though a link to the account is still prominently displayed on the tourist board’s website, Ms. Flax-Brutus responded to a Beacon query by asking this reporter in an e-mail to “advise what BVI Recovery Fund is.”

In subsequent e-mails and during a phone interview — after this reporter sent Ms. Flax-Brutus a link to the Pledgeling account in which she herself apparently posted several times — she declined to speak about the fund.

Instead, Ms. Flax-Brutus agreed to discuss Seeds of Love, another tourist board initiative started to help replant trees throughout the territory after

Irma, but she balked at providing basic information about how much money was raised through that fund as well. The tourist board has advertised Seeds of Love and the BVI Recovery Fund side-by-side in the past, though Ms. Flax-Brutus maintained that the two accounts are not connected.

“I’ll be honest and tell you that we at the tourist board do not discuss what things cost in terms of dollars and cents,” she said. “We look at what it does for the community and for the businesses.”

Asked again about the BVI Recovery Fund, she said, “I’m not going to get into that with you. I’m going to tell you what I told you at the beginning of this conversation, which is I [also] don’t want to get fixated on what the Seeds of Love programme costs. It’s not that I’m not trying to give you information, but sometimes we get fixated on the wrong things; something that is intended to be good ends up to be negative.”

Ms. Flax-Brutus deferred all questions about the BVI Recovery Fund to the Ministry of Finance. But after being asked about the fund in an August interview, Financial Secretary Glenroy Forbes asked, “Have you spoken to Sharon?”

Mr. Forbes said he was aware that there was a government recovery fund that was being publicly promoted, but that the Ministry of Finance had not received any specific reports about it.

“I think you should ask the permanent secretary in the Premier’s Office, Dawn Smith. She’s the PS responsible for the tourist board,” he said, adding, “They were promoting [the fund]. At least she should know.”

On Monday, Ms. Smith deferred questions about the account to Brodrick Penn.

As for the other government-managed relief accounts, varying degrees of information have been provided to the media.

According to a brief spreadsheet Mr. Forbes sent the Beacon in September in response to queries about the BVI Recovery Fund — which the spreadsheet doesn’t mention — government has managed at least three relief funds since the storm, including an “Emergency/Disaster Fund” allocated in previous annual budgets; a roughly $900,000 “Hurricane Irma Account,” and a set of donations worth about $16 million.

There was $973,041 in the Emergency/Disaster Fund before Irma, and $845,680.10 remained, according to the spreadsheet. Some $127,000 was spent on “gas for cleanup and relief and other [National Emergency Operations Centre] costs,” the list states.

The disaster fund encompasses “small amounts of money” that government has allocated in several past budgets, Mr. Forbes said. A fund committee, which he chairs, typically receives requests from struggling residents through the Department of Disaster Management. The committee then deals with the requests and makes decisions about who receives assistance.

Money from the disaster fund went to helping some residents there who needed refrigerators, stoves and other items. According to previous annual budget reports, a $500,000 contribution was allocated to the fund in 2009, and $300,000 was given in both 2010 and 2011.

Another government-managed relief fund, called the “Hurricane Irma Account,” received donations from other Caribbean governments, various banks, financial services firms and others, Mr. Forbes said, adding that this fund was not advertised to the general public.

The last item listed in the spreadsheet is titled “value of donations through programmes/projects,” which apparently includes “approximately” 284 donations. All told, $15,896,551.68 was received, and $6.3 million has been spent.

The brief notes section about that group of donations states, “Programmes to include the rehabilitation of some government infrastructure, assistance to residents through food, health, housing and personal items — recorded through n-kind [sic] assistance and pledges.”

Mr. Forbes did not respond to follow-up e-mails that asked for further clarification about each account.

Separately, Chief Information Officer Desiree Smith e-mailed a list of 199 donations to members of the media on Oct. 2 after a reporter for the news website BVI Platinum asked for “the figures in terms of hurricane relief” during a press conference the previous day with Premier Dr. Orlando Smith.

That spreadsheet lists limited information about more than $16 million worth of donations that government received after Hurricane Irma.

Mr. Forbes did not respond when asked via e-mail if this set of donations is the same as the group titled “programmes/projects” in the spreadsheet he provided.

The Beacon sent Ms. Smith, the chief information officer, several questions about the list of donations she had forwarded, but rather than answer those questions, she promised a press conference would be held on Oct. 16. That press briefing was delayed, and as of the Beacon’s press deadline yesterday, more than two weeks later, it had not been officially rescheduled.

Mr. Penn told the Beacon on Monday that it likely would be held in the next two weeks.

Back in August, Mr. Forbes spoke more about his initial concern that various donation accounts were being set up after the storm, and that it would be difficult to keep track of exactly how much had been raised and spent by government.

“I was very concerned and tried to impress on my colleagues that we needed to document to the best that we can all monies, whether in-kind or money,” he said, while describing other gifts that government received, like medical supplies, household goods and other items. “I kept on advising that we needed to create a document [to record all donations].”

Sometime last year, a central “database” was established to track incoming donations, which is maintained by the Premier’s Office, Mr. Forbes said.

It’s unclear if that database was the spreadsheet of donations released this month by the chief information officer.

“I expected that somewhere along the line there would be auditors to check to see how we collected the money and how we utilised it,” he said. “I think there will be — there should be — a special audit of the handling of the donations and stuff. I think there will be.”