On Tuesday afternoon, Premier Andrew Fahie presided over his first coronavirus press conference since March 24, fielding questions from the media and reminding residents that “freedom” is in their “own …

END_OF_DOCUMENT_TOKEN_TO_BE_REPLACED 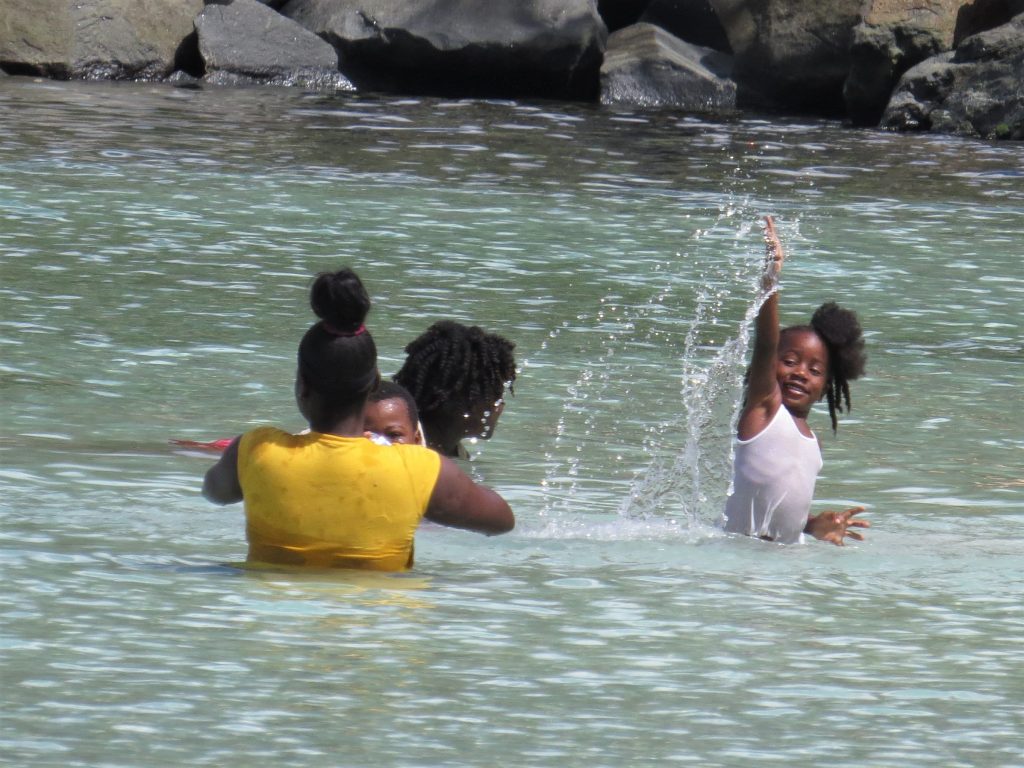 While working to maintain social distancing, families took to the beach at Cane Garden Bay on Sunday morning, the first day that beaches reopened during the phased internal reopening of the Virgin Islands. Government lifted the curfew for beaches from 6 a.m. to 1 p.m., and the overall curfew until 7 p.m. (Photo: DANA KAMPA)

On Tuesday afternoon, Premier Andrew Fahie presided over his first coronavirus press conference since March 24, fielding questions from the media and reminding residents that “freedom” is in their “own hands” if they want to continue to enjoy liberties like the reduced curfew and newly reopened beaches and businesses.

Most beaches throughout the territory reopened on Sunday for “exercise and therapy” from 6 a.m. to 1 p.m., but large gatherings are still prohibited and other restrictions remain in place.

The overall curfew hours were also reduced that day: Residents are now permitted to leave their homes from 6 a.m. to 7 p.m., though they must continue to follow social distancing protocols.

The premier said when announcing the new measures on Friday that this night-time curfew is expected to continue for at least two weeks.

The beaches are being monitored, and Governor Gus Jaspert said officials will close any areas where visitors disregard the rules. The Baths and Devils Bay on Virgin Gorda, however, remain fully closed.

“We must not become complacent or think that any relaxation of measures or opening of further parts of our territory and businesses means that the threat of the virus has gone away,” Mr. Jaspert said. “It has not. We can take a risk-based approach for the next phase of reopening if we all act together to manage these risks.”

Businesses in the territory continue to reopen as well. Mr. Jaspert said Friday the newly created Social Distancing and Compliance Task Force had inspected 713 businesses and certified 647 of them to open their doors. He added that all key public offices also reopened last week.

The governor reminded business owners that they must give employees enough time to return to their homes before the evening curfew starts.

Not all businesses in the territory are allowed to reopen, however. Mr. Fahie said hotels, villas, public pools, gyms, cinemas, bars, nightclubs and other entertainment organisations will remain closed for now.

“We know this will be difficult for those businesses not yet allowed, but this is because specific protocols need to be developed for these businesses to operate safely as they are ones where there is a higher potential risk of crowding or gathering and more person-to-person contact,” he said.

In addition to a planned economic stimulus package, Mr. Fahie said on Tuesday that government is working with banks to address the needs of residents and businesses whose finances have been impacted by the outbreak. He envisions breaks for loan payments for a full year, rather than the typical three or six months, he said.

“We are asking them to go beyond the norm, to at least one year, to help the people,” he said. “We cannot continue to act with Covid-19, which is something that is not normal, and apply normal procedures to it.”

Plans for an economic stimulus package to support residents who are struggling financially are still in the works, Mr. Fahie added on Friday.

“We continue to move forward with firming up the economic response plan that has already been approved in principle by Cabinet, with some tedious details now being worked out,” he said.

Some individual measures have been implemented, including a $2 million fund for fishing and farming, online education support, free water delivery and free house-to-house garbage collection until early June. He said Cabinet also decided to waive stamp duty for belongers seeking to buy land during the pandemic.

“Overall, response is being tweaked so that it is practical, realistic and gets into the hands of the people in an accountable and transparent manner,” he said.

He did not offer a specific date for rolling out the complete stimulus plan. However, he said on Tuesday that it would be introduced in stages, with careful consideration for how to best ensure the stimulus funds reach those most in need.

Also on Friday, Deputy Premier Carvin Malone, the minister of health and social development, announced the full recovery of another person diagnosed with Covid-19.

He said on Tuesday that only one active case remained in the territory.

There remains only one confirmed death of a Covid-19 patient, which was announced April 18. The premier extended his condolences to the family of the 52-year-old woman. In response to questions about the patient’s initial hospital intake process during the Tuesday press conference, Mr. Malone said any unresolved issues would be addressed privately, and he declined to discuss the matter.

Of the 13 samples that the Caribbean Public Health Agency processed last Thursday, he said, all came back negative. This brings the total number of tests administered here to 167, and the total number of people tested to 143, some of whom were tested more than once.

A large batch of medical supplies from the United Kingdom arrived on Tuesday. The flight carried vital laboratory equipment, test kits, five ventilators (in addition to the nine current machines), six inflatable isolation wards and hospital beds, according to a press release. Mr. Jaspert said the delivery brings the total number of UK-contributed test kits to 4,800. A second shipment of new testing machines is scheduled to arrive next week.

In an interview with the Beacon on Friday, Mr. Jaspert said government still plans to expand testing efforts, though he referred questions about how the programme will be conducted to health officials.

Also on Tuesday, the premier said the territory has spent $12 million for efforts including bringing testing facilities up to speed.

“Further investments are being made to build out the old Peebles Hospital to create a Covid unit, which will be specifically manned to deal with the cases as they arrive,” he said, promising further updates as they’re available.

The hospital currently has the capacity to treat 20 to 30 mild cases per hour in a designated assessment area outside the emergency room, where severe cases are referred.

“Success of the phased internal reopening rests on all of us to do our part to operate safely in this new environment,” Mr. Malone said. “The phased border reopening will present new challenges and heightened risk of the importation of the Covid-19 virus. This risk must be carefully managed to ensure that we can rapidly identify, isolate and treat all new cases and their contacts.”

Belongers and people with permanent-resident status can enter the territory beginning June 2 through Terrance B. Lettsome International Airport, though under “strict conditions,” Mr. Fahie said on Friday. He added that the government would offer more details about the process in a future update.

“The reality is we need to adapt to live and work in this new regular,” the premier said. “This means putting people first.”

Even after border restrictions are relaxed, belongers will have to follow protocols that are still being developed, he said. These will include mandatory quarantine in a home or hotel room certified by a public health team.

“We have to be sure that here in the BVI, we can contain what’s happening here first, as much as we can control it,” he said, noting that many of the patients with coronavirus in the territory were already in quarantine by the time they were tested.

Some people residing in the territory have been permitted to leave for emergency medical reasons, Mr. Malone added.

All these cases went through the proper channels at the hospital, and when they returned they went into a 14-day quarantine, he explained.

Mr. Jaspert said Cabinet will this week discuss arrangements for the eventual reopening of the territory’s borders to tourism.

Leaders also commended the work of people who helped deliver food to those who needed it in recent weeks.

“Our volunteers and our community spirit continue to fill me with great pride,” Mr. Jaspert said on Friday. “Their work epitomises the true character of the people of this territory.”

“Hurricane season is expected to be active,” he said.

Helicopters flying overhead last week were surveying the islands for landing sites in case they need to deliver relief supplies during the upcoming season, Mr. Jaspert said. He added that the UK is prepared to assist where needed.

“I know you will be very familiar with the steps you need to take and will likely have plans in place, but this year will be different,” Mr. Jaspert said. “We cannot allow ourselves to be distracted by Covid-19.”

The premier promoted a “get ready, stay ready” initiative, which puts measures in place to prepare for hurricane season despite the challenges presented by Covid-19.

“Any leader who thinks that Covid-19 is going away anytime soon will be fooling themselves and their country,” Mr. Fahie said. “We have to work together to come up with ways to live through this health pandemic.”