Miss World 2017 Manushi Chhillar shook up a can of spray paint and bent over the canvas in a plastic smock, ready to help the students of Eslyn Henry Richiez …

END_OF_DOCUMENT_TOKEN_TO_BE_REPLACED 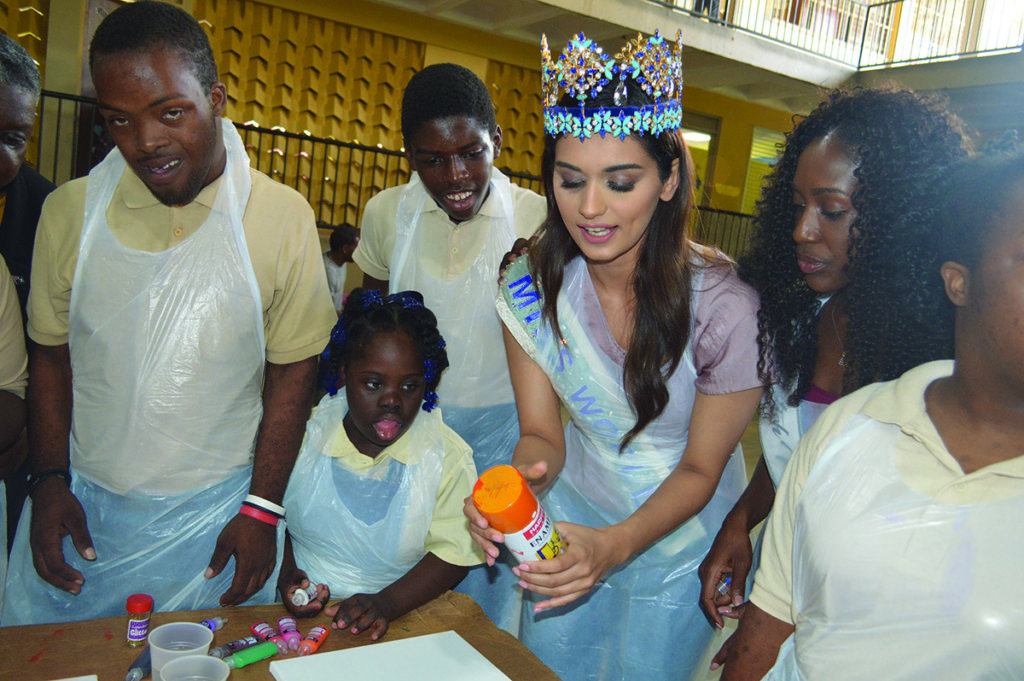 Miss World 2017 Manushi Chhillar of India holds a spray can as she prepares to paint alongside Miss World BVI 2017 Helina Hewlett and students from the Eslyn Henry Richiez Learning Centre.Photo: CLAIRE SHEFCHIK

Miss World 2017 Manushi Chhillar shook up a can of spray paint and bent over the canvas in a plastic smock, ready to help the students of Eslyn Henry Richiez Learning Centre create a souvenir to take with them when they move into their new school.

Now, it’s closer to being built, thanks to the work of Ms. Chhillar, who is also Miss India, and the Miss World Beauty with a Purpose campaign.

Officials hope to capitalise on Ms. Chhillar’s visit to raise much of the estimated $1.4 million it will take to rebuild the school — the sole institution in the territory exclusively serving special-needs students— after it was rendered unusable by Hurricane Irma.

Ms. Hewlett, who was one of the driving forces behind bringing the Miss World delegation here, was experiencing a homecoming of sorts.

“I went [to Althea Scatliffe], and my brother still goes here,” she said. “We even visited my old classroom.”

Splashing acrylic paints and glitter across the canvas alongside Ms. Hewlett and Ms. Chhillar were Miss World 2017 competitors from five different regions of the globe, as well as Miss World 2016 Stephanie del Valle of Puerto Rico. According to Principal Vansittart Huggins, the paintings eventually will be auctioned off to benefit the school.

“Abstract painting really helps the students express themselves, and furthers the efforts of special education,” she said.

Later that afternoon, the queens headed over to the remains of the school to help begin the demolition process, accompanied by volunteers from All Hands and Hearts. Miss World Chairwoman Julia Morley explained why, out of so many places they could have chosen, the women came to the VI.

“Mountains, beaches, trees: Those are things that quite honestly you can get anywhere,” Ms. Morley said. “But what really matters is the people.”

She urged others to join in the cause.

“These children are brilliant,” she said, adding, “They are wonderful and healthy and well cared for. But they also need the tools to work with. You need the community as a whole to join in.”

‘Beauty with a Purpose’

The queens arrived Sunday to Terrance B. Lettsome International Airport, where they were greeted by Governor Gus Jaspert.

That night, during a gala fundraiser at The Moorings, they were received by Premier Dr. Orlando Smith, Education and Culture Minister Myron Walwyn, and other officials. Speaking to the audience, Ms. Chhillar said helping in a disaster comes naturally to her. Her parents are both physicians, and she currently studies medicine at Bhagat Phool Singh Medical College in Sonipat, India.

“My father would never waste a second to go on a rescue mission for any disaster that happened in India, and he’d come back home and share his experiences with me,” she explained. “To experience nature’s wrath is one of the most difficult situations.”

However, she was impressed by the territory’s resilience. She described the moment when the plane she was on broke through the clouds and she saw the islands for the first time.

“I have never seen anything more beautiful in my entire life,” she said.

She added with a laugh that initially she wanted to visit the VI because it is one of the few places where Indians don’t need a visa.

However, she said, “I did not anticipate how much I would fall in love with this place. I am honoured to be a part of this mission, to take this back to my country, to show the world how warm and welcoming you all have been.”

Later in the week, the beauty queens greeted patients and staff at Peebles Hospital and students and staff at H. Lavity Stoutt Community College, and enjoyed a public celebration of VI culture and heritage at the Tortola Pier Park.

Sunday night, Ms. Chhillar kicked off the fundraising to rebuild the learning centre by pledging $10,000 on behalf of the Miss World organisation, with another $2,000 added by Miss World Korea Ha-eun Kim’s home franchise.

By the end of the night, the figure had topped $50,000, thanks to donations from ATU General Trust, Digicel, FLOW and other private donors. During the dinner, Mr. Walwyn addressed the strides the territory has made in educating those with special needs.

“The issue of special education has come a very long way [in the VI],” he said. “Many years ago you wouldn’t see someone who was differently abled walking around the streets of Road Town. … We have come from differently abled persons being hidden away to being out and being a part of the community.”

He particularly congratulated the work of Ms. Huggins in advancing the cause of special education in the territory.

The principal, for her part, was impressed with the way the Miss World delegation interacted with her students.

“I really enjoy the love and compassion [they] have exhibited,” she said. “They are very down to earth, doing what the kids like to do; interacting with them. I see no discrimination from them. The students really enjoy having them around.”

She added that she is looking forward to the moment she hangs one of the paintings in the completed school, saying it would serve as a token of Ms. Chhillar’s visit.