An amendment related to the controversial “fast-track” plan to residency and belongership being championed by Premier Andrew Fahie is scheduled for a hearing in the House of Assembly on Monday, …

END_OF_DOCUMENT_TOKEN_TO_BE_REPLACED 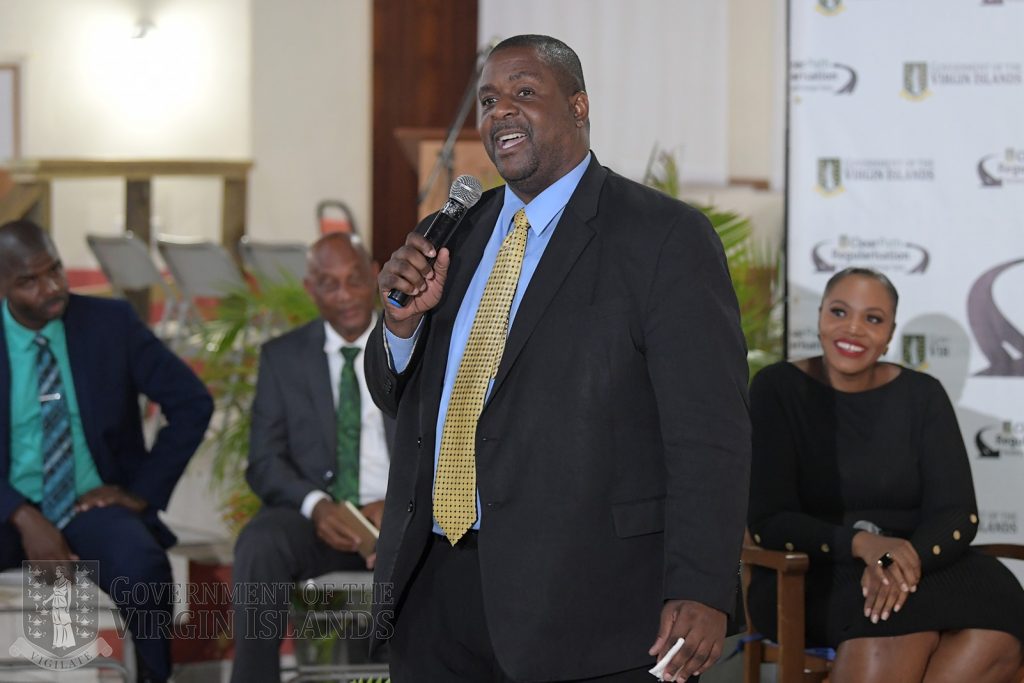 An amendment related to the controversial “fast-track” plan to residency and belongership being championed by Premier Andrew Fahie is scheduled for a hearing in the House of Assembly on Monday, even as the sudden postponement of the programme — which had been scheduled to begin this week — has left potentially thousands of applicants waiting, paperwork in hand, for instructions about when and how they can apply.

“Applicants are advised to complete the preparation of all necessary documents to apply and await further instructions due to possible reshaping of the programme,” stated a post last Thursday on the Premier’s Special Projects Facebook page. More than 1,000 people have applied for the required police reports since the plan was announced, according to police. Now, they’re left waiting to see what comes next.

“I can’t tell you what is going to happen, because we have to make amendments, which we promised the people,” the premier explained last Thursday during a “listening town hall meeting” at the Catholic Community Centre on Virgin Gorda.

It was one of two sessions he hastily scheduled last week in response to a sudden back- lash against the plan, which is designed to clear the large backlog of applications and process new ones for residents who have lived in the Virgin Islands for at least 15 years and contributed to the community.

The premier has called the initiative a “fast-track programme … that will restore the dignity of hundreds and establish a foundation for empowerment and unity.”

In order to enact it, he moved to rush an amendment to the Immigration and Passport Act through the House of Assembly during its May 17 sitting.
However, he met with ob- jection almost immediately.

Opponents have launched a petition calling the move “illegal and “flawed,” questioning the motives behind the high-speed rollout of the plan and calling for more consultation with Virgin Islanders.

As of Tuesday, the petition had 117 signatures, two more than it had a week before. The document, coupled with conversations with opponents of the plan, was apparently enough for the premier to pull the proposed amendment from the HOA meeting.

In withdrawing it from its second and third readings, the premier said, “You always have to listen to the voice of the people.”

“We are working on some policies to take to the public to discuss the way forward, with all of us discussing it so that it is clear,” he explained.

In recent days, opposition members weighed in, claiming they, too, have been shut out of the decision-making process.

According to the order paper for the Monday HOA sitting, Opposition Leader Marlon Penn plans to demand answers from the premier about whether his ministry “developed an immigration policy or some other basis to inform the fast track process to residence and belonger status,” and if not, the reason for the “process and expedited timelines.”

He also will request that the premier “convene a committee of the whole House” to discuss the amendment before it returns for its second and third readings.

Mr. Penn spoke last Thursday during a community meeting at Valerie O. Thomas Community Centre in Sea Cows Bay, in which the opposition, made up of members of three different parties, questioned the premier’s motives and advised him to move more slowly and look at immigration reform more holistically.

“We all agree that there needs to be a clear path for persons who are living amongst us to be regularised,” Mr. Penn told the crowd. “The first step was to address and look at the process that we have currently, to deal with the persons who have been here 20, 25, 30-plus years.”

For now, the second and third readings for the amendment, which was Gazetted May 20, are on the order paper for the Monday sitting.

The changes most pertinent to the fast-track plan apply to sections 16 and 18, which address belongership and residency. The amendment to Section 16(4) appears to broaden Cabinet’s powers to grant belongership to someone “who is at the date of making the application for such a certificate.” It reads, “Where in the exceptional circumstances of any case, the Cabinet considers it fit to do so, or for any other reason” it may, after consultation with the Immigration Board, grant a certificate of belongership.

The phrase “for any other reason” is the sole addition to this subclause. The person must be of “good character” and have been “ordinarily resident” in the territory not less than seven years — requirements that the amendment will not change.

Additionally, under subclause 5 in the same section of the current act, a resident can be granted belongership without an application if they have made “significant and consistent contributions to the economic and social development of the terri- tory over a period of at least 50 years.” According to the “objects and reasons” section, the amendment “seeks to remove the 50-year requirement to be replaced with a 10-year requirement.” However, the actual amendment includes a 15-year requirement, not 10.

The amendment to Section 18 of the act inserts a new subsection providing for the issuing of certificates of residence “in exceptional circumstances or for any other reason where Cabinet considers it fit to do so, subject to specific requirements.”

Although many of the objections have revolved around the proper vetting of applications, new applicants will still have to present the same documents required previously, and pay an increased fee to apply.

According to the premier, “at least” 20 employees have been hired to usher through the applications. Under the “fast track” plan, those who are successful will go straight from residency to belonger status instead of waiting a year in between as the current law requires.

According to the current act, the power to grant residency and belongership rests with Cabinet “after consultation with the [Immigration] Board.”

However, at Thursday’s opposition meeting, Julian Fraser (R- D3) questioned whether Mr. Fahie’s intention was to bypass the Immigration Board altogether.

“This action, the act of granting status to people, … is an age-old operation; it’s been going on for as long as I remember,” he said, adding that potential permanent residents and belongers are not actually required under law to submit formal applications. “The process hasn’t changed. … If the minister brings a list of 80 names to you, these are the names that Cabinet has approved. The chances are nil that the board is going to not approve it.”

That proves the new legislation is not needed, he said.

“I don’t understand what’s happening right now; the premier is changing the law to avoid going to the board. … There’s no board; there’s nothing,” he said.

The Board of Immigration consists of eight members appointed for two-year terms by the governor, acting on the advice of the minister.  The board is regulated under Section 13 of the act, which would not be affected by the proposed amendment.

The members of the most recent Immigration Board were appointed for their two-year terms on May 1, 2017, which means their appointments would have expired this month. Even so, Mr. Fraser’s main objection seemed to be that the premier failed to consult the HOA.

“I personally do not believe that any minister or even the Cabinet should be able to operate in such a fashion,” he said. “There is a thing called oversight and that’s what the House of Assembly is for.”

Kim Huish, a native of the United Kingdom who has lived in the VI for 25 years and had planned to apply for belongership under the plan, said she was “quietly optimistic,” despite the postponement.

“I do understand the fears and I hope that there’s a difference between addressing the fears versus caving to fear mongering,” she added.

In the meantime, she said those she knows who planned to apply are still expecting to have the chance to do so.

“We were pretty far through the process,” she said. “It was pretty obvious once [the ‘town hall listening meeting’] was convened … that it had to be some kind of delay.”