Monday afternoon was an emotional day for many people who have lived in the Virgin Islands for decades as they accepted certificates granting them residency, belonger status, or both. “It …

END_OF_DOCUMENT_TOKEN_TO_BE_REPLACED 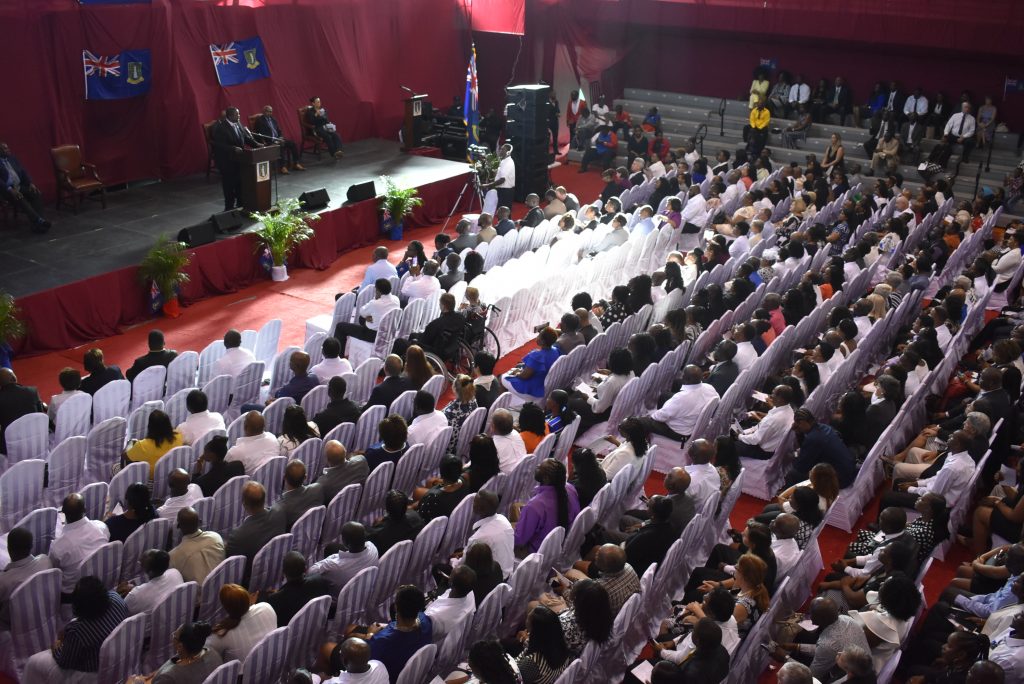 Monday afternoon was an emotional day for many people who have lived in the Virgin Islands for decades as they accepted certificates granting them residency, belonger status, or both.

“It was such a happy event,” said Susanna Rice, now a belonger to the territory. “There were faces there that I’ve seen my whole life that have been here for over 40 years.”

“We recognise you as a member of our community and as a person that is a Virgin Islander now,” Premier Andrew Fahie said during the ceremony. “This recognition comes from you having lived amongst us for so many years, … and you have made special contributions. For this we are grateful, and we encourage you to maintain the spirit of BVI love.”

His words were welcomed with a standing ovation from the hundreds of applicants, as well as friends and family who came to support them.

Mr. Fahie’s government faced backlash earlier this year when it announced a fast-track programme for belongership that would clear a backlog of applicants and allow foreigners who have lived in the territory for 15 years to apply for belongership — a jump down from the previously mandated 20 years.

Ultimately, however, the requirements for belongership remained at 20 years after Mr. Fahie and the government heeded the cries of Virgin Islanders who called the original plan “flawed” and “illegal” and claimed that they had been excluded from the decision-making process.

For the backlog of 20-year-plus residents, however, the programme proceeded and residents were encouraged to apply for belongership.

Ms. Rice, who has had residency status for about six years, heard the call for applications and submitted hers in August. She and many of her friends applied for belongership and waited to hear back. The day finally came last Thursday, she said, and when she got the phone call she burst into tears.

Nevertheless, it was also a bittersweet moment.

“My parents, who had been here since the late 70s and early 80s — their paperwork was in there for so long that they passed away without getting their belongership,” she said. “This has always been home and will always be, but getting that certificate made it real.”

Kim Huish, a chef aboard the charter yacht Cuan Law, was granted belongership after living in the territory for 24 years.

“I’m grateful that someone had the bravery to make the decision: Thank you, Andrew Fahie,” she said. “The people at Immigration worked their socks off under difficult circumstances. A nod of thanks to the people who did all the hard work.”

Ms. Rice added, “We’ve earned it: We’ve contributed to the island for so long and it’s great to be acknowledged.”

Ms. Huish echoed the sentiment, recalling her years in the territory.

“I’ve worked hard. It’s not always glamorous, but the rewards can be an amazing life,” she said. “I’ve been very lucky and I appreciate that. One of the things that I hope to do going forward is integrate the yachting and diving industries.”

Ms. Huish also hopes to push for mandatory education on swimming and water safety for children in the territory, which she hopes will encourage the youth to take interest in preserving the territory’s ecology.

Mr. Fahie also announced plans for reforming the labour and immigration sectors, hoping to ensure that workers are “treated fairly in the job market.”

Planned measures include digitising labour and immigration processes in order to streamline the system to acquire and renew work permits, he said.