In April 2016, government signed an agreement with the United Kingdom that is changing the regulatory landscape of the Virgin Islands’ financial services industry. The agreement, which officials touted as …

END_OF_DOCUMENT_TOKEN_TO_BE_REPLACED 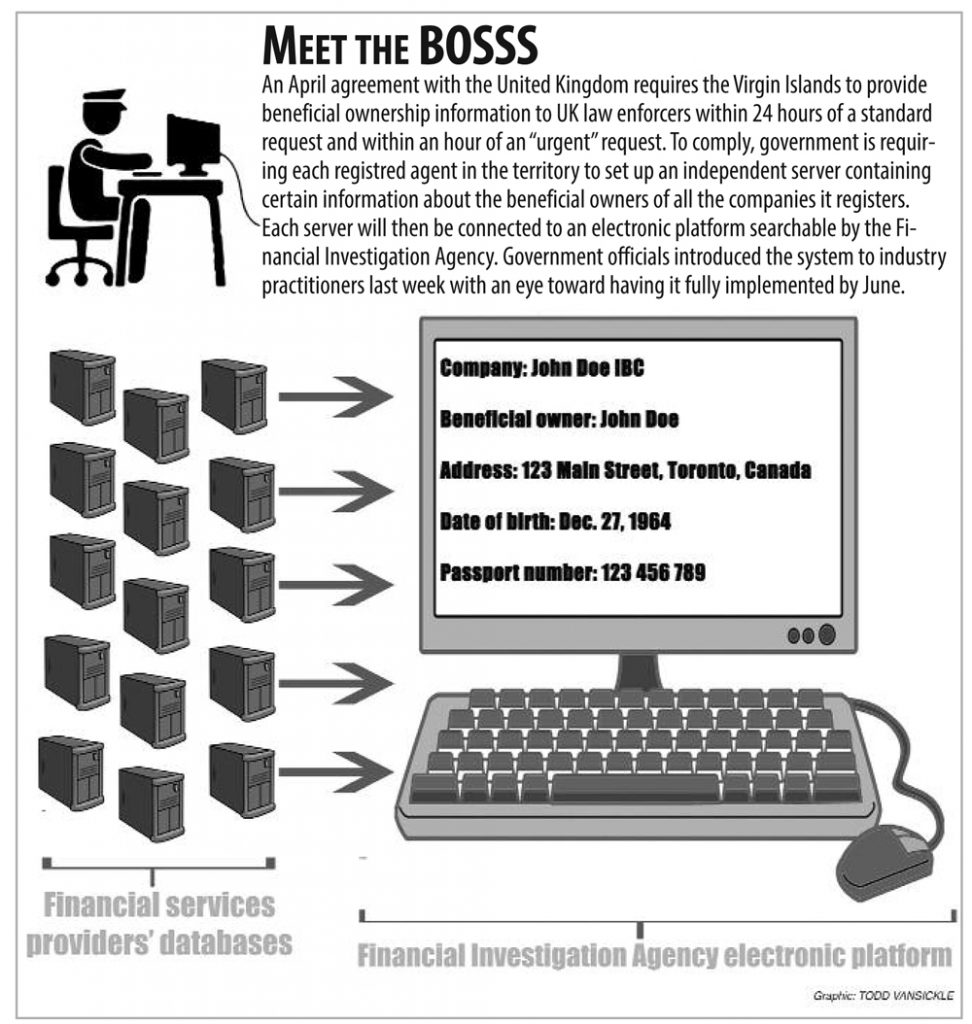 In April 2016, government signed an agreement with the United Kingdom that is changing the regulatory landscape of the Virgin Islands’ financial services industry.

The agreement, which officials touted as the culmination of years of negotiations, requires the VI to be prepared by June 30 to provide beneficial ownership information to UK law enforcers around the clock on any day of the year, within 24 hours of a standard request and within an hour of an “urgent” request.

In order to meet this demand, the government is setting up an “electronic platform,” which will have access to information — including names, addresses, dates of birth, and passport numbers — about the beneficial owners of all of the 450,000-plus VI-registered companies.

Last week, officials demonstrated the platform — which cost at least $750,000 — to industry professionals at a BVI Finance breakfast forum.

Media weren’t invited to the presentation, but Financial Secretary Neil Smith explained last year how the system works, and BVI Finance board member Robert Briant spoke to the Beacon on Tuesday about some of the steps government needs to take to have the system fully in place before the June 30 deadline.

Meanwhile, other UK OTs are also implementing similar systems as a result of their own agreements with the UK. In the Cayman Islands, for instance, legislation has already been introduced that provides for the creation of a beneficial ownership platform.

With direct access to the beneficial ownership data of all the companies registered here, at first glance the system seems akin to a central registry — something government and industry officials have long opposed.

But instead of holding all the information in one central government database, each registered agent will hold such information on its own separate server. Those servers, which must be segregated from the agents’ regular servers, will all be linked to government’s central platform but will not be linked to each other, according to Mr. Smith (see graphic).

Such a system was dubbed the “BOSSS” — Beneficial Ownership Secure Search System — when it was unveiled last week.

According to a list of consultants provided by the House of Assembly in December, the firm BDO Ltd. was paid $745,000 last year to set up this system.

“The BOSSS platform meets all international standards as defined by the Financial Action Task Force and demonstrates the territory’s ongoing commitment to providing the appropriate balance between privacy and transparency,” stated a BVI Finance press release about the forum. “It will operate in a similar way to the territory’s current exchange agreement with the UK government, ensuring beneficial ownership information can be shared with treaty partners rapidly and efficiently.”

According to Mr. Briant, the managing partner of the VI branch of Conyers Dill & Pearman, financial services firms already should have the information that will go into the system, such as the names, dates of birth, and passport numbers of the beneficial owners of the companies they register. Once the BOSSS system is up and running, he said, firms will simply have to enter their information into the system and keep it updated.

“We were told it would be easy to take our data and copy it from our database to the BOSSS database,” he said.

However, government still needs to pass legislation that will require firms to take this step.

Mr. Briant said he was told at last week’s forum that legislation is expected to be introduced next month. Such legislation has already been introduced in the Cayman Islands, and will be debated on Feb. 22, according to the Cayman Compass.

But that doesn’t necessarily mean that the VI is behind its sister territory in implementing the system, said Harneys partner Colin Riegels.

“Both BVI and Cayman have moved on slightly different tracks on the implementation,” he said Tuesday. “In Cayman, they’re going down the legislation route first before arguing about what information should be included. In the BVI, they’re going the opposite way: putting forth the IT platform before deciding what will be in it.”

The Cayman draft legislation provides a glimpse of what lawmakers here could be mulling soon.

The proposed law there would fine firms roughly $30,000 if they wilfully and knowingly fail to keep their beneficial ownership information up to date. It also provides for up to two years imprisonment for individuals who break the law.

The legislation, however, also exempts certain companies from having to submit details of their beneficial owners. Exempt companies include those listed on the Cayman Islands Stock Exchange “or an approved stock exchange;” entities that serve as a “special purpose company;” private equity or collective investment schemes; and other entities specified in the draft legislation.

“In Cayman, they created exemptions for companies that will be exempted. I imagine that list is being haggled over on a few levels,” Mr. Riegels said. “We haven’t started that in the BVI because we haven’t seen any legislation yet.”