While debating a bill that would update oversight for the practice of medicine, dentistry and alternative care in the territory, members of the House of Assembly also took a broader …

END_OF_DOCUMENT_TOKEN_TO_BE_REPLACED 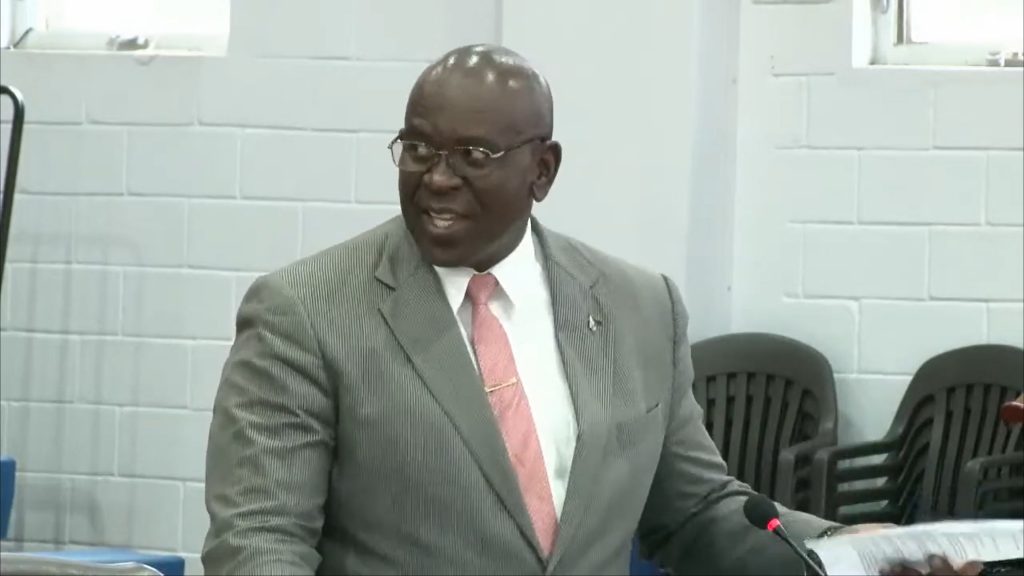 Deputy Premier Carvin Malone recently presented a bill for licensing medical practices in the Virgin Islands, which the House of Assembly passed on Tuesday. The bill now awaits the assent of Governor Gus Jaspert. (Photo: PROVIDED)

While debating a bill that would update oversight for the practice of medicine, dentistry and alternative care in the territory, members of the House of Assembly also took a broader look at the future of Virgin Islands health care over the past week.

The Medical Amendment Act, 2020 would set specific qualification standards for medical professionals seeking licence to practice in the Virgin Islands.

The 47-page bill saw its second and third readings July 2 after it was presented by Deputy Premier Carvin Malone, the minister of health and social development.

The House voted in favour of the bill on July 7 after making “some substantial” amendments in closed-door committee based on detailed input from health professionals, according to Mr. Malone. The bill, however, won’t take effect or be made public until it receives assent from the governor.

During the debate, Premier Andrew Fahie said that as government maps out medical care it will be important to allow for the integration of alternative forms of medicine.

The bill includes practitioners in fields beyond typical medicine, who could get licensed through the Allied Health Practitioners Register.

For example, the bill defines a “naturopath” as “a person who is trained in a therapeutic system that employs the use of natural forces, such as light, health, air, water and massage and other natural remedies but does not prescribe drugs, pharmaceuticals or substances for ingestion for the treatment of health conditions.”

Mr. Fahie said there is a balance to be found between traditional and natural medicine.

“The reason I’m going into natural medicine is that we have to start to be pioneers,” he said.

The bill also more explicitly outlines what constitutes professional misconduct, such as practising without the appropriate licence.

Other infractions include improper relations with a patient; knowingly betraying a patient’s confidence except in extenuating circumstances; knowingly abandoning a patient in danger; issuing a false medical certificate; acting as a specialist without proper registration; wilfully misrepresenting the effectiveness of a treatment; and knowingly practising while intoxicated.

One amendment would up the $3,000 fine for submitting false information to the registry to $5,000.

Meanwhile, if the head of a corporate body knowingly commits an offence under the bill, that person would be liable on summary conviction to a maximum $5,000 fine and up to three years imprisonment.

Fees for new registration and licensing would see an increase under the new bill.

An overseeing council would be given authority to waive special registration fees for medical professionals called in during a state of emergency or disaster, or for a council-approved specific purpose.

The transition wouldn’t be immediate, though.

Medical or dental practitioners who are already registered wouldn’t have to renew for a year after the act comes into effect.

If a practitioner’s licence lapses, they would have to pay a $500 penalty fee in addition to the cost of the renewed licence.

Contending that it is impossible to discuss the future of medicine in the VI without talking about funding, opposition member Mitch Turnbull pointed to some issues with the National Health Insurance system.

“We have a system that could and should work, but it has to be funded properly and timely,” he said.

He expressed concern for the long-term financial stability of the system, explaining that NHI is currently costing government so much that it is unsustainable.

According to figures from Mr. Malone, the territory of fewer than 30,000 spends in excess of $90 million on health care annually, around $42 million of which is funded by a subvention from the government to the BVI Health Services Authority.

This bill did not specifically address insurance, but it is one of a series of anticipated acts and policies guiding the future of medicine in the VI.

When such big-picture financial issues crop up, Mr. Turnbull said they trickle down to everyday interactions, with some medical practices experiencing lengthy delays getting paid by NHI. The premier agreed that NHI reform is needed.

“If it is not reviewed, it will bankrupt the VI,” he said.

In his concluding remarks, Mr. Malone said the House went the extra mile in exploring non-traditional practices with its amendments. He indicated that several other health-related bills would be coming down the pipeline as well, including ones dealing with mental health and private hospital licensing.