A law Gazetted last week would legalise certain forms of gambling in the Virgin Islands, but it would also regulate the practice by establishing a new commission and punishing infractions …

END_OF_DOCUMENT_TOKEN_TO_BE_REPLACED 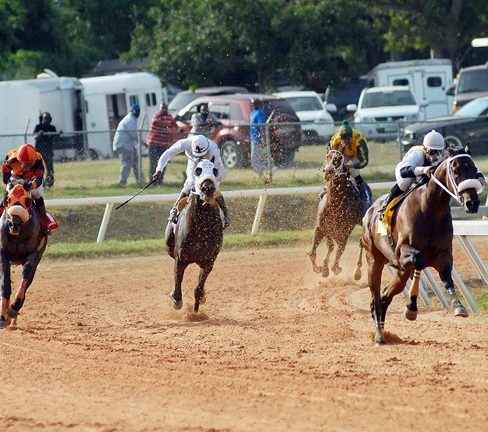 The newly proposed Gambling (Gaming and Betting) Control Act, 2020 would legalise and regulate gambling in the Virgin Islands, with a particular focus on horse racing. New fines and prison sentences would be included to deter offenders. (File photo: DAVID HELDRETH)

A law Gazetted last week would legalise certain forms of gambling in the Virgin Islands, but it would also regulate the practice by establishing a new commission and punishing infractions with up to five years in prison or $20,000 in fines.

The Gambling (Gaming and Betting) Control Act, 2020 had its first reading during the most recent House of Assembly session last month, and it was Gazetted March 4.

The bill lays out a comprehensive framework for certain forms of gambling, such as pari-mutuel betting on horse racing, and would allocate part of the fees collected from licensed operators for social funds designed to mitigate the industry’s potential negative effects.

During the Feb. 25 HOA session, Premier Andrew Fahie said the proposed act would open up new revenue sources for residents.

“We can’t put in all the areas to create policing without creating avenues, whether it be the gaming and betting, whether it be medicinal marijuana, without areas for persons to make revenue,” Mr. Fahie said. “We can’t over-legislate people’s lives and under-regulate the opportunities for them to make money in this territory.”

The bill would impose strict criteria for getting a permit to work in the gambling sector, among other measures designed to regulate an industry that is “vulnerable to infiltration by money launderers and terrorist financing,” according to the bill text.

“It is recognised too, that these sectors have the potential to contribute meaningfully and positively to the national economy if regulated effectively,” the bill states.

Gambling is currently illegal in the Virgin Islands. According to Section 335 of the territory’s 1997 Criminal Code, the owner of any establishment that allows “gambling, betting or the holding of a lottery or sweepstakes” faces up to a year of prison time and a $100,000 fine. Also, anyone found on a premises with instruments for gambling could face six months of imprisonment or a $500 fine; anyone betting in public could get three months imprisonment or a $250 fine.

But that would change with the passage of the new bill, which repeals Section 335 of the code.

The bill reflects reforms promised by the previous administration. In 2015, then-Education and Culture Minister Myron Walwyn called for the legalisation of pari-mutuel betting as part of strategic development of horse racing.

“It is an industry that has remained disorganised and underdeveloped,” he said. “Is it not time for there to be a business case and a business development plan for horse racing?”

He said at the time that the ministry intended to establish a horse racing commission that would be responsible for registering horses and setting appropriate rules “for the proper functioning of horse racing and the operations of the horse courses.”

The commission, he said, would also tackle the “ticklish” issue of managing pari-mutuel betting, which he described as a potential funding source for maintaining horse racing in the long term.

Mr. Walwyn’s proposal drew praise from the BVI Horse Owners Association, which was maintaining the Ellis Thomas Downs facility with financial assistance from government. This funding was “not being done with any structured and coordinated programme in place” and was not sustainable, Mr. Walwyn said.

That wasn’t the first time lawmakers pursued such legislation: In 2003 legislators said a bill designed to allow pool betting had been in the works, but then-Natural Resources and Labour Minister Reeial George ultimately announced the issue was “on hold.” Despite the association’s approval, no such legislation came to fruition in 2015, though the previous proposal did seem to inspire the newly proposed gambling legislation.

Under the new bill, the Gambling (Gaming and Betting) Control Commission would be given the power to regulate and control the operation of gambling in the VI.

This commission would grant licences for operating gambling establishments; offer recommendations about regulating the gambling industry; collect fees and levies from licence holders; and “ensure that licensed activities are conducted in a fair and honest manner,” among other responsibilities.

Different licences would allow a person to run a gaming establishment in the territory; permit betting activities; facilitate the staging of live racing and pool betting, also known as pari-mutuel betting; and regulate the sale of gaming machines to casinos and lounges. The commission would also be granted authority to create any other type of licence deemed necessary.

The bill also includes regulations for “gaming,” which is defined as playing a game of chance with prizes or monetary winnings at stake.

Under the proposed law, people cannot participate in a game of chance if they are not present when it takes place. Also, a licensed employee has to oversee all games at casinos, and the commission has to approve the rules. Owners also must display the minimum and maximum wagers for every game. If only prizes are involved and not money, the practice doesn’t fall under the same strict rules as gambling.

The proposed legislation also stipulates what taxes licence holders would pay. This includes $1,000 per annum for every baccarat table, blackjack table, Caribbean stud poker table, dice table, regular poker table, roulette table, rum 32 table, sip san table, slot and “every other table or gadget not referenced previously.” There would also be a $250 per annum fee for each slot machine.

Though the commission would be empowered to collect a levy for live and simulated horse racing, the bill does not specify how much.

The act also outlines penalties for violating the rules. Anyone without a licence who operates a betting foundation; offers or manufactures a gambling machine; or facilitates betting or gambling faces a fine of $10,000 or up to two years imprisonment.

For illegally conducting gambling; operating as a bookmaker or promoter; manufacturing gambling equipment; importing a gambling device; providing facilities for gambling of any kind; and several other offences, a person is liable for up to $20,000 in fines or up to five years’ imprisonment.

Someone with a licence who violates its terms faces up to $5,000 in fines or six months’ imprisonment. The same penalties apply for manufacturing or installing gambling software without a licence.

The proposed bill also outlaws cheating and counterfeiting by gambling establishments and patrons alike. The penalties include up to a $10,000 fine or two years imprisonment.

The gambling act also aims to “prevent gambling from being a source of crime, being associated with crime or being used to support crime,” and to “ensure compliance with international anti-money laundering and counterterrorism financing regulations in line with the Financial Action Task Force Recommendations.”

Additionally, it includes provisions designed to protect minors and other vulnerable groups from being harmed or exploited by gambling. Under the bill, minors would not be allowed to gamble or enter a gambling facility except for racetracks. Anyone who knowingly invites or employs a minor faces a $10,000 fine and up to two years in prison.

The commission would establish a Rehabilitation Fund that would “assist non-govern mental organisations and other groups working with vulnerable persons and their families suffering the effects of gambling addiction and other forms of harm or exploitation associated with gambling.”

Five percent of the funds collected by the commission would go to a new government- run Development Fund to support sports, social and community work, arts, and culture. A Rehabilitation Fund would get 2.5 percent.

The Rehabilitation and Development Funds Committee would be required to deliver a report to the minister and House of Assembly on the management of these funds within three months of the end of each fiscal year. The main commission would also be required to submit a report within four months of the year’s end.