Scanning the horizon of Anegada with binoculars in hand, Nancy Woodfield-Pascoe and Clive Petrovic kept a careful watch for birds in the area. “Pelicans — I count four,” Mr. Petrovic …

END_OF_DOCUMENT_TOKEN_TO_BE_REPLACED 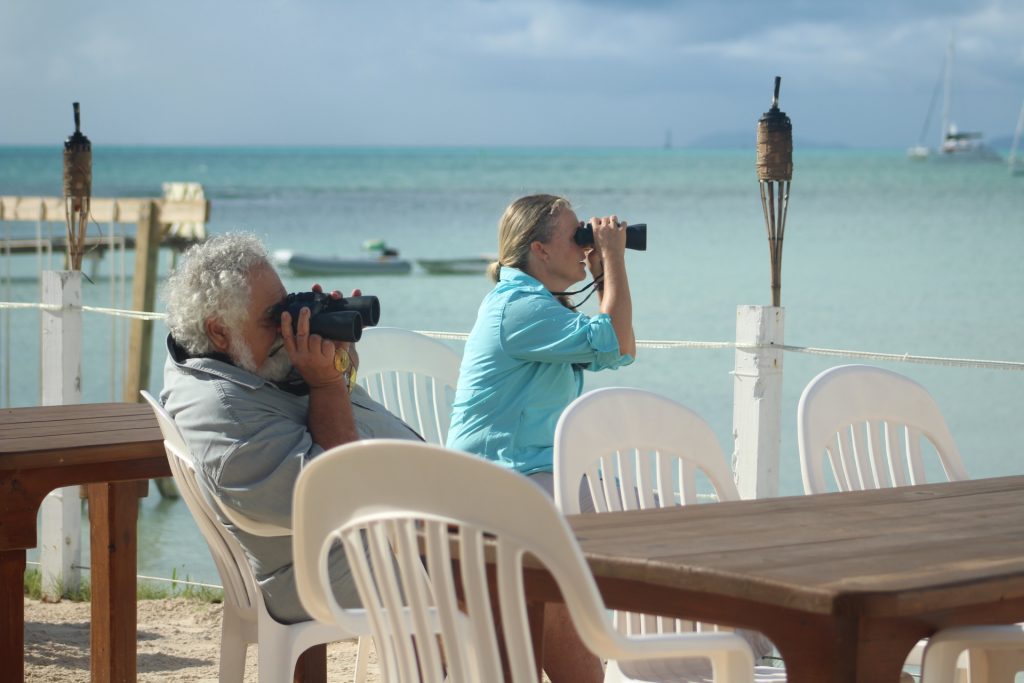 Scanning the horizon of Anegada with binoculars in hand, Nancy Woodfield-Pascoe and Clive Petrovic kept a careful watch for birds in the area.

“Pelicans — I count four,” Mr. Petrovic noted, looking out past the docks.

He received confirmation from Ms. Woodfield-Pascoe soon after with a short, “Yup, me too.”

They grabbed a seat by Anegada Reef Hotel as a dozen ruddy turnstones swooped in nearby, eager to pick up scraps left behind by guests.

“You can always count on the ruddy turnstones to be here,” Ms. Woodfield-Pascoe said.

On Friday, the two toured Anegada to count as many bird species as possible for the 115th Annual Christmas Bird Count.

The initiative, which is organised by the National Audubon Society in the United States, launched in 1900 when Frank Chapman, an ornithologist at the American Museum of Natural History in New York, proposed an alternative to hunting birds on Christmas, according to National Geographic.

The count takes place between Dec. 14 and Jan. 5, and here in the Virgin Islands, the National Parks Trust facilitates the count in Tortola and Anegada.

Ms. Woodfield-Pascoe, deputy director of the NPT, and Mr. Petrovic, an environ- mental consultant, have taken part in the bird count for decades, contributing valuable information to the National Audubon Society.

“All the data that we collect — it’s a snapshot of all the birds you see in one day — is posted on the National Audubon Society website,” Ms. Woodfield-Pascoe said. “You can go in there and look at all of the results we’ve ever col- lected for the BVI. You’re looking at trends of what bird life you’re seeing. Because we’ve been doing it for so long, you notice when you’re not seeing the common stuff.”

The count isn’t always about seeing a rare or unusual bird: It’s also about noticing differences in bird behaviour and asking relevant questions to understand trends, she explained. If there are changes in numbers, scientists can begin to question why that is and start piecing the puzzle together.

For example, if numbers are low for migratory birds that usually pass through the territory at a certain time of the year, the causes for the delay often can be linked to occurrences in other regions of the world.

One year, Ms. Woodfield- Pascoe recalled, a migratory species didn’t show up to the VI. The species usually eats crabs off the northeastern coast of the US, but that year the crab count was low up north and it affected the birds’ migration to the territory.

“Something that’s happening up in the US affects us — because whose birds are they? They’re not ‘our’ birds, they’re just migratory birds,” Ms. Woodfield-Pascoe said. “And then you have some birds which are resident and are here year-round.”

The birdwatchers take the same route each year on Anegada, starting at the ferry dock and continuing around the island to include Cow Wreck Beach, salt ponds and the airport.

Looking at different areas, they are able to watch sea birds, wetland birds and land birds. They drive slowly with their windows down to hear birdcalls and count which ones they hear along the way. Throughout the trip, bananaquits chirped often on the left and right.

One of the birdwatchers’ go-to spots is a dumpster near The Settlement. All kinds of creatures gather there to feast on the trash, including birds, cats and insects.

This year, there were nearly 20 cattle egrets and at least four swallows flying around at the site.

In a nearby salt pond, the number of flamingos was too great to count, so the two will rely on photographs to get a better idea of how many of the pink birds were lounging in the pond that day. They estimated close to 200 — a healthy amount and what was expected.

Friends and acquaintances also contributed to the count, reporting the birds they saw in recent days. Altogether, the pair counted 29 species on Anegada.

On Dec. 28, the two also headed the bird count on Tortola, where nine others participated as well.

“I’d like to do Virgin Gorda, but I’m looking for people who are birders there,” Ms. Woodfield-Pascoe said. “We’re trying to get more people interested.”

She has noticed that ever since Hurricane Irma, residents have been more interested in noticing the wildlife in the area. It was heartening to see a Facebook page called BVI Birds and Wildlife pop up recently, she added.

“As stuff started coming back, people were so excited to see things, and they started taking photos of them and posting them on that,” she said. “I’m really happy to see that people are becoming more aware of their surroundings and are looking at nature.”