K’Shonda Hinds is a thousand miles away from the Virgin Islands fighting cancer, but she must have been smiling on Saturday morning knowing that 26 swimmers were ploughing through VI …

END_OF_DOCUMENT_TOKEN_TO_BE_REPLACED 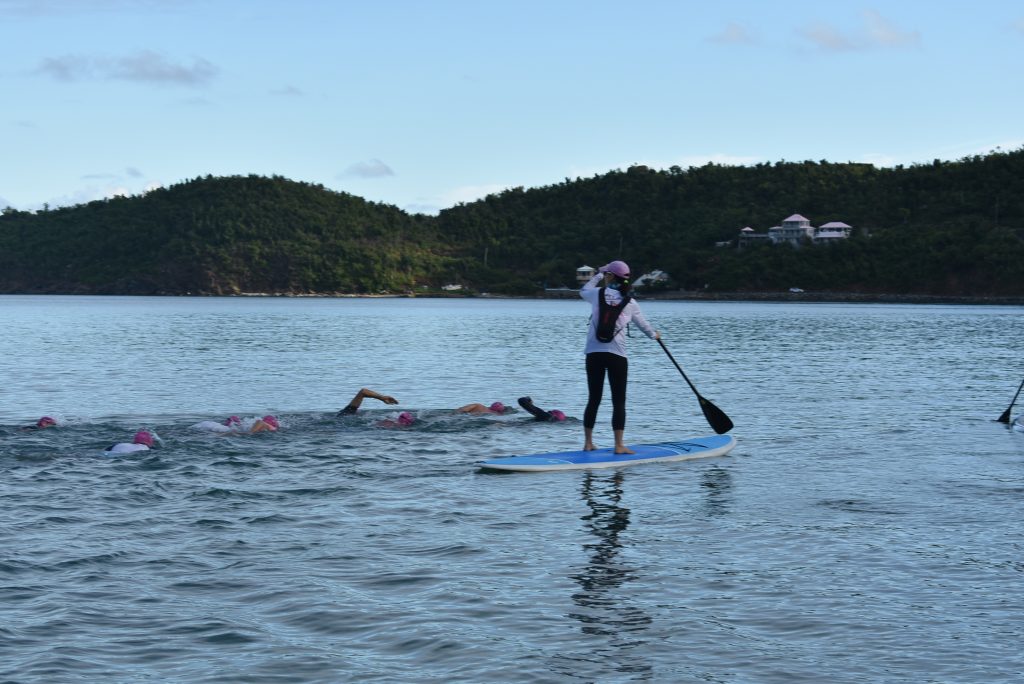 K’Shonda Hinds is a thousand miles away from the Virgin Islands fighting cancer, but she must have been smiling on Saturday morning knowing that 26 swimmers were ploughing through VI waters on her behalf during the 10K Bonecrusher charity swim from Brewers Bay to Little Jost Van Dyke.

The event was back for its third installment in four years, after having been called off in 2017 due to Hurricane Irma.

Late last year, 11-year-old K’Shonda, a resident of Baughers Bay, saw Dr. Klas Buring after noticing some unusual swelling in her leg. She was soon diagnosed with a rare form of osteosarcoma, explained Dr. Buring, who was on hand to meet with swimmers as they plunged into the water of Brewers Bay. He detailed how K’Shonda underwent chemotherapy, but her leg ultimately had to be amputated.

“This is one of the most malignant cancers you can think of in a child,” he said.

Fortunately, the VI has an arrangement with the United Kingdom to send patients overseas for treatment, so K’Shonda, Dr. Buring, her mother and her aunt made the trip to the hospi- tal of University College London, where the girl has been undergoing chemotherapy for nine months. Her last round ended Wednesday.

“It’s very demanding … but she’s been very brave. She’s changed her BVI accent to a British accent,” he said with a laugh.

He added that K’Shonda still faces many rounds of further treatments, including physical therapy so she can learn to use her new prosthetic leg.

“She’s an amazingly strong young girl,” said Natasha Ruscheinski, co-organiser of the Bonecrusher. “Her family had to move to the UK for her treat ment, so to be able to give them some money to make life a bit easier in this tough time is great.”

Each year, the route for the swim takes participants from Brewers Bay across the channel, by Sandy Spit, and through to Little Jost Van Dyke, finishing up at the B-Line Bar. It was a fantastic day for a swim, participants said.

“We’ve been very lucky again to have great conditions: very flat,” Ms. Ruscheinski said. “I think when we got to Sandy Spit there was a bit of chop which got a bit tricky, especially for the latter groups, but other than that I don’t think you can swim a better 10K anywhere in the world.”

Twelve participants took on the whole course, and the others swam in teams, switching off with the help of support boats and stand-up paddleboarders who followed along. The field included international swimmers from South Africa, the Cayman Islands and St. John.

Each year, explained Ms. Ruscheinski, the route of the swim has varied slightly. This year, in order to accommodate the trip to Little Harbour, swimmers had to do an extra lap in Brewers Bay. That involved swimming from Martin Point, back to Anderson Point, and then back to the chan- nel. But it was all worth it, Ms. Ruscheinski said.

“It’s good to support a bar like [the B-Line]. Obviously, they would have been hit pretty hard after the hurricane. A lot of this has been rebuilt,” she said, gesturing to the facility. “It’s supporting a business that wouldn’t have had a lot of patronage since the storm.”

Main sponsor Carey Olsen sponsored drinks and a barbecue lunch for the swimmers, and everyone kicked in a $5 donation for K’Shonda’s treatment.

The funds, which had already reached close to $10,000 as of last week, came from a combination of donations, entry fees, corporate sponsors and individual sponsorships.

For one of the swimmers, Jacco Bos, the Bonecrusher was a homecoming. A former VI resident who has since relocated back to his native Canada, he began the Bonecrusher in 2015 after a friend, noticing that he swam in Brewers each morning, challenged him to swim from Tortola to JVD.

Their first beneficiary was a young girl suffering from scoliosis, and over the years the swim has raised money for other beneficiaries as well.

Last year, the event was scheduled for the Saturday after Irma, so it was cancelled. However, some swimmers who had relocated to the Cayman Islands swam there, donating the money to the Free Food for Kids programme conducted through Brandywine Restaurant.

“I can’t really take credit for what it’s become,” said Mr. Bos, adding that he was excited to return to the territory for the first time in two years despite the hurricane damage. “This was a catalyst for me to come back.”

On the way over to JVD, groups swam past a sea turtle and a giant eagle ray. Ms. Ruscheinski and other swimmers agreed that they were lucky to be able to experience the natural beauty of the VI while raising money for a meaningful cause.

“We live in paradise and we get to swim here,” she said.