Christi Maddox, owner of Villas Virgin Gorda, already has confirmed one booking for a staycation in Virgin Gorda, and she has fielded four inquiries since Monday. “We are just waiting …

END_OF_DOCUMENT_TOKEN_TO_BE_REPLACED 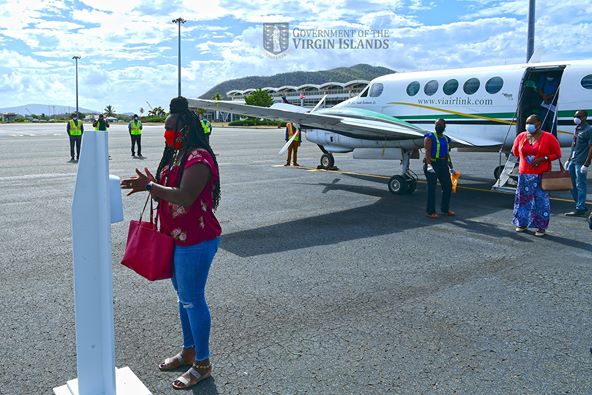 Christi Maddox, owner of Villas Virgin Gorda, already has confirmed one booking for a staycation in Virgin Gorda, and she has fielded four inquiries since Monday.

“We are just waiting to see if we have to go through government inspection,” she said on Tuesday. “We should know by the end of the week and get that accomplished. So we’re looking to start booking some guests.”

Right now, the 13 properties that Ms. Maddox manages can only host “staycations,” but she is hoping to see international guests return to the island soon.

As borders re-opened Tuesday to nationals, permanent residents, and those displaced while seeking medical attention overseas, the territory remains free of known active Covid-19 cases and the internal economy continues to gradually reboot.

Along with hotels and villas that have been approved for social distancing measures, gyms and fitness facilities are now allowed to operate after passing inspection as well.

The announcement of further relaxed measures came yesterday evening from Premier Andrew Fahie, who added that curfew is now in effect between 10 p.m. and 5 a.m. daily, ending an hour earlier in the morning to allow more time for exercise, and beginning three hours later.

Beaches, meanwhile, will now remain open each day until 5 p.m., extended from 3 p.m. previously. According to Curfew Order No. 21 presented earlier today, this present curfew will last until June 18.

As the United States Virgin Islands opened to tourism on Monday, movement of boats on the water is now open, governor Gus Jaspert stated yesterday.

On Tuesday evening, on the radio show Honestly Speaking with Claude Skelton-Cline, Mr. Fahie urged residents to remain vigilant. He noted that a “minority” of people are not wearing masks in public, and said businesses must also adhere to the rules. He also reaffirmed the quarantine measures for those returning from abroad.

“I want to be one of the first to officially welcome them back home. They have to understand that once they are quarantined they should not interact with anyone. They must stay in quarantine for 14 days, and they must be tested in order to come out of quarantine,” he said. “I’m asking those that are coming back home to remember that those of us here laboured through many curfew orders.”

He added that government is holding meetings to “make sure that we put security to make sure persons stay be- cause [the territory] can’t afford to retard” the progress already made.

A government press release issued last Thursday stated that “dozens” of people have already registered to return, and officials announced that two flights returned to the territory yesterday.

Acting Public Health Communications Specialist Adrianna Soverall did not disclose the exact number of registrants as of press time.

National epidemiologist Harmony Messiah-Brewley also took to Facebook and warned, “No active cases does not mean there is no ongoing transmission.”

Government posted an infographic for inbound travelers during their mandatory quarantine at home, which advised staying at least one metre away from other people; staying isolated in a room; not touching commonly shared items; maintaining good indoor ventilation; and thoroughly disinfecting bathrooms.

The graphic also noted that quarantine premises will have “security on location 24 hours a day,” and that those who violate the quarantine can be imprisoned for up to 24 months and fined $5,000.

Government did not explain how 24-hour security would be provided at what could amount to dozens, if not hundreds, of homes.

For work-permit holders who wish to enter the territory, borders remain closed at least until June 15, but government hasn’t announced if they will be allowed to return after that.

Last Thursday evening, Mr. Fahie released details of the second phase of an economic stimulus plan designed to help mitigate the effects of Covid-19 on the economy.

Businesses have adapted to the changing curfew orders over the past several weeks. For Ms. Maddox, that means being as flexible as possible and offering discounts for residents at the villas she manages.

Ms. Maddox got approval to begin marketing the villas on Sunday, launched a marketing campaign the next day, and is already fielding several inquiries.

Last Thursday evening, Mr. Fahie said that the government is working with hotels and villas to quarantine those who are returning from overseas.

Ms. Maddox added that Villas Virgin Gorda is “open to helping in any way.”

“Families can come to the villas and stay secluded as it is,” she said. “In Virgin Gorda, we only have one hotel, so most people will stay in villas here.”

Her main goal, she said, is to keep the company’s workers employed.

After the premier announced the creation of a Covid-19 Unemployment Relief Fund last Thursday, people lined up in front of the Social Security Board on Tuesday to register.