Members of the joint task force working extra shifts on border security have been paid additional allowances of $400 per month as promised, Premier Andrew Fahie said last week in …

END_OF_DOCUMENT_TOKEN_TO_BE_REPLACED 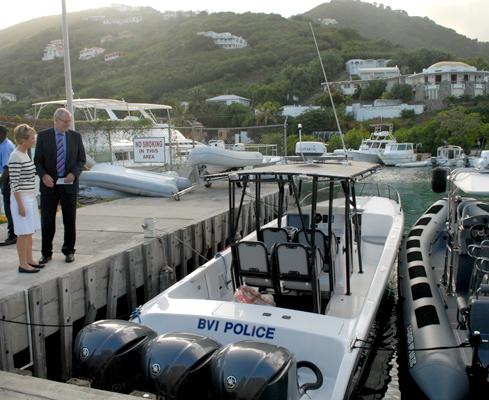 Police boats, the Defender and the Swift Justice, are pictured in 2011. File photo: STEVEN MELENDEZ

Members of the joint task force working extra shifts on border security have been paid additional allowances of $400 per month as promised, Premier Andrew Fahie said last week in the House of Assembly in response to a question from Opposition Leader Marlon Penn.

On April 17, 2020, the National Security Council supported the formation of a joint task force of officers from the Royal Virgin Islands Police Force, the Customs Department, and the Immigration Department to monitor borders in an attempt to prevent community spread of Covid-19, Mr. Fahie said.

“The ongoing Covid-19 pandemic has placed the Virgin Islands in need of an increased level of security to ensure the safety of our citizens,” the premier explained. “Supervision was important to avoid illegal entry during the statutory curfew order.”

Mr. Fahie added that the council considered a recommendation for giving those officers a $400 to $600 security allowance each month for their services. He said the Ministry of Finance and Department of Human Resources agreed to a $400 monthly allowance. Cabinet approved the allowance on March 3, he said.

“Given the immense task that was at hand, then is when that was agreed,” he said. “So it will not stretch for the full duration of the JTF but would only go to I think the last three or four months. I’m not sure.”

Most of the officers had to be taken off vacation to join the task force, he explained.

“So it was a lot of work and a lot of manpower needed to man the borders and keep us safe,” he said. “So after a few months is when they decided that they have to be compensated for this, and that is
when they got together and they brought [the] proposal and it was accepted.”

The premier did not indicate the monthly total of the allowances.

Both legislators thanked the force and frontline staff for keeping residents safe.

“I’m happy to know they are now being compensated for the additional hours of work that they put in on behalf of the people of this territory,” Mr. Penn said.