Borders to open to tourism on Dec. 1

Pink flamingos and flourishing reefs were among the scenes in a video premiere launching “BVI Love,” a marketing campaign geared toward bringing tourism back to the territory on Dec. 1. …

END_OF_DOCUMENT_TOKEN_TO_BE_REPLACED 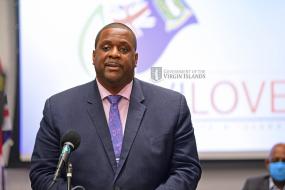 Pink flamingos and flourishing reefs were among the scenes in a video premiere launching “BVI Love,” a marketing campaign geared toward bringing tourism back to the territory on Dec. 1. That day, borders will re-open to visitors for the first time since they were closed on March 22 at the start of the Covid-19 pandemic, officials announced during a ceremony broadcast Monday on Facebook.

“Our focus [is] to push forward, drive green innovation, introduce green diversification, and revitalise green expansion of the economy through SMART strategies, empowering our people, and ensuring development, all in BVI Love,” Premier Andrew Fahie said.

Since borders closed, the tourism industry has been one of the hardest hit sectors of the economy, and in recent months many business owners and other residents have pushed government to announce a re-opening date.

Few details about the opening were provided during the Monday ceremony, but BVI Tourist Board Director Clive McCoy said the BVITB has “done its homework” by looking at other territories and how they’ve handled re-opening in the face of Covid-19.

The campaign will continue to roll out with the help of the BVI Chamber of Commerce and Hotel Association and the H. Lavity Stoutt Community College to “ensure our standards and training [are] above what is required” and to market the VI as a tourist destination, Mr. McCoy explained.

Infrastructural improvements and investments from stakeholders will be crucial to the campaign, and quarterly stakeholder meetings will be held, he added.

The premier stressed the importance of using technology in the re-opening process.

“Through our requisite officials, we have to use contact tracing methods available through technology, where we will test and retest the system prior to our re-opening,” he said. “That is why we need the time to ensure the measures that are going to be put in place are working effectively.”

He added that the process will be collaborative.

“We will meet with [the BVICCHA], car rental companies, hoteliers, personnel from Crafts Alive, airline operators, marine sector, taxi operators, restaurant owners, villas operators,” he said. “No business will be left behind.”

However, he also noted that “businesses must be able to meet the standards” for re-opening and said that the territory only has “one shot.”

“So let us prepare, aim and hit our target,” Mr. Fahie said.

On Tuesday, BVICCHA Executive Director Keiyia George said the association — which has been among the most vocal proponents of re-opening — was “glad to hear the [premier] confirm that he will be meeting with the BVICCHA and other businesses to ensure that all stakeholders are included.”

Last month, the BVICCHA had complained that government had not responded to five letters it sent with suggestions that included a proposed two-stage reopening to tourists beginning July 20.

Meanwhile, potential visitors also have kept a close eye on the re-opening, and some have even booked tickets to the territory already.

Katie Boylan, from the United States, posted in the BVI Alive Facebook forum that she plans to fly in on Dec. 1.

Others, however, have reservations about the fluid decision-making and the possibility of a change in the reopening date.

Michelle Kreth said that it’s “too risky to assume things won’t change” and that she has “mentally moved on.”

Here in the VI, business owners and others have been waiting to hear the protocols for re-opening.

The Tuesday ceremony, however, was light on such details and heavy on pageantry.

It began with a prayer and musical showcase, followed by statements from Junior Minister of Tourism Sharie DeCastro and BVITB Chairwoman Kenisha Sprauve.

Mr. McCoy also spoke at length on the new “BVI Love” marketing campaign, saying that tourism would take on a new “look, feel and perspective.”

“Who we are is tourism, so in BVI Love we will strengthen and prepare the industry in the new regular as we re-open our borders,” he said. “It is a campaign designed to bolster the VI’s image locally, regionally and abroad by focusing on what makes the VI a special destination and business jurisdiction.”

He applauded local businesses promoting staycations and residents for taking opportunities to experience the territory while borders remained closed.

Officials also touted the new “BVI Love” logo, which features the VI flag and a leaf of the territorial tree, the white cedar.

On Friday a similar Facebook ceremony was held to rebrand the BVI Ports Authority and launch another new logo, which includes an image of an anchor.

Ports will also host a contactless payment system as the BVIPA looks to provide “more efficient and safe ways to do business at the port” in the Covid-19 era, Mr. Fahie explained.

Government announced in a Facebook graphic posted on Friday that the territory had confirmed a total of 71 cases of Covid-19, with one of those cases resulting in death.

Mr. Malone gave another update on Tuesday in the House of Assembly, stating that there were nine active cases and 61 recoveries.

Government, he said, had tested 4,546 people so far, and 20 test results were pending.