Sir Richard Branson wants a $500 million bailout for Virgin Atlantic from the United Kingdom government, and after the request drew criticism he offered up Necker Island as collateral. “Over …

END_OF_DOCUMENT_TOKEN_TO_BE_REPLACED 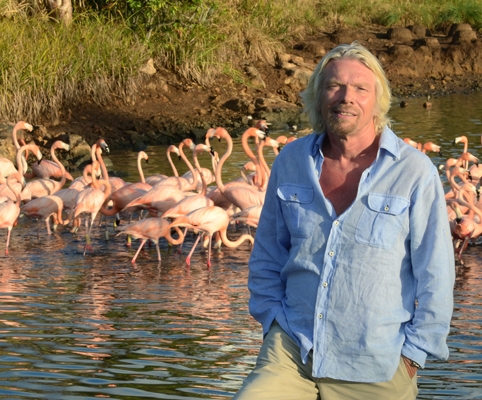 Sir Richard Branson poses with flamingos on his private Necker Island, which he is offering to the UK government as collateral for a $500 million loan. (File Photo: TODD VANSICKLE)

Sir Richard Branson wants a $500 million bailout for Virgin Atlantic from the United Kingdom government, and after the request drew criticism he offered up Necker Island as collateral.

“Over the five decades I have been in business, this is the most challenging time we have ever faced,” he wrote in an open letter on Virgin.com, in which he explained that the travel sector in which many of his companies operate has been hardest hit by the Covid-19 pandemic. “As with other Virgin assets, our
team will raise as much money against the island as possible to save as many jobs as possible around the [Virgin] Group.”

“An island is the same as property when it comes to the financing institution in terms of the risk involved,” he said.

It would merely be offered as collateral to the lender — in this case, the government of the United Kingdom. Whether a foreign government would be
able to place a charge on a private island in the VI would be a
question for a lawyer, he said.

Financing a private island, though, isn’t unusual, he said, especially when it’s being bought with the intent to develop, such as in the case of Norman Island or Sir Richard’s own Mosquito Island.

“They’re doing it for commercial reasons,” he said. “And a lot of people then choose to get financing in place and not with their own money unnecessarily.
Private islands where somebody’s got it for their own personal enjoyment tends to be the ultra-wealthy, and obviously that’s normally [bought] without any financing involved.”

In any case, Sir Richard may not get his wish. Despite his airline having to ground as much as 85 percent of its fleet, according to its corporate site, the UK has so far turned the billionaire down. Some in the UK have dismissed his approach as an attempt to fleece British taxpayers into funding a company that they accuse of not paying taxes in the UK. Ryanair CEO Michael O’Leary told Sky News that Sir Richard is “sitting in the Virgin Islands as a tax exile.”

Sir Richard has denied this, writing that he and his wife Joan “did not leave Britain for tax reasons” but for the love of the VI and the 30-hectare Necker Island, which he bought for $120,000.

“Over time, we built our family home here,” he wrote. “The rest of the island is run as a business, which employs 175 people. As with other Virgin assets, our team will raise as much money against the island as possible to save
as many jobs as possible around the [Virgin] Group.”

He claimed to have created “hundreds of thousands of jobs and paid hundreds of millions in tax” around the world.

“Our companies based in the UK pay tax in the UK, and so forth,” he wrote.

He added that, like other airlines around the world during the pandemic, Virgin Atlantic is seeking not “free money” but a loan that it would pay back.

He said that was a choice they made to prevent layoffs, and noted that his companies have been working to help develop mass producible ventilators and oxygen hoods to help in the pandemic.

Through his company Virgin Care, he claimed to have invested more than £75 million into the UK’s National Health Service.

Sir Richard also said that despite an estimated personal net worth of $4.4 billion, he doesn’t have much cash on hand but instead has invested it back into his businesses.

Forbes reported that according to its recent accounts, Virgin Atlantic has not paid a profit tax to the UK government in two years. It received a tax credit of £22 million in 2018 and £14 million in 2017 because it was unprofitable in
those years.

However, Virgin staff pay tax, and a spokesman said Virgin Atlantic annually turns over about £250 million in air passenger duties and £135 million
in payroll taxes to the UK.

“From a business perspective, the damage to many is unprecedented and the length of the disruption remains worryingly unknown,” Sir Richard wrote. “We have already committed a quarter of a billion dollars to help our businesses and protect jobs, and will continue to invest all we can.”