This is a new version of the story that was originally published on Feb. 25.  On Monday, the territory voted for change. The Virgin Islands Party, bouncing back from a …

END_OF_DOCUMENT_TOKEN_TO_BE_REPLACED 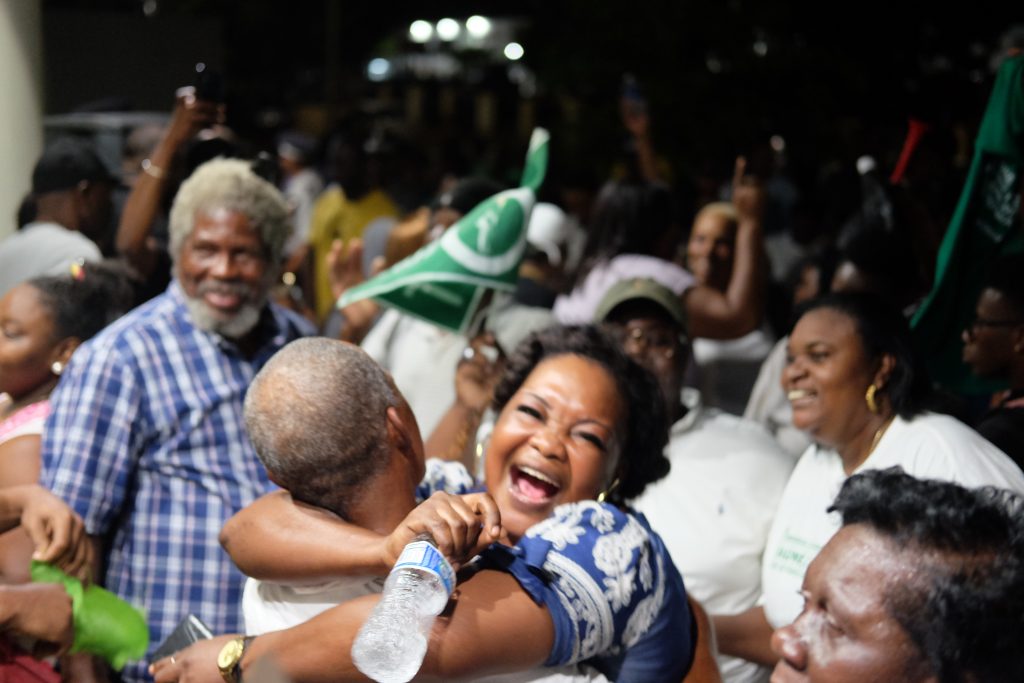 This is a new version of the story that was originally published on Feb. 25.

On Monday, the territory voted for change. The Virgin Islands Party, bouncing back from a 2015 loss and bitter infighting among its leadership, won a swift and decisive victory at the polls, emerging with eight out of 13 seats in the House of Assembly, sweeping all four at-large races, and sending two incumbent rival party leaders packing.

“We have heard you, the people of the British Virgin Islands, and we have taken note of your yearning for genuine change and renewal,” VIP Chairman Andrew Fahie said in a statement, after spending the evening celebrating with jubilant supporters at the Multi-purpose Sports Complex. “As your premier-elect, I look forward to the next chapter, and I look forward to fighting for ordinary people every day.”

In District One, with slightly over 81 percent of the total, Mr. Fahie, a six-time incumbent who was sworn in on Tuesday, easily won by the largest margin of the night, earning 601 votes more than his nearest challenger, Sylvia Romney-Moses of the Progressive VI Movement.

The frequent calls for government accountability from Mr. Fahie, the former opposition leader who picked up the pieces of his decimated party after its loss in 2015, clearly resonated with voters after eight years of National Democratic Party government that opponents said was marked by financial mis- management and lack of transparency — despite a change in leadership from outgoing Premier Dr. Orlando Smith to current Chairman Myron Walwyn, whose meteoric rise to the top of the NDP last year resulted in a fall, on Monday, nearly as dramatic.

Some races proved nail-biters, although after polls closed at 6 p.m., the territory wasn’t left in suspense for long. This year, the introduction of electronic vote counting meant that results came in about an hour, starting at around 9 p.m.

Shouts of surprise and joy echoed through the Multi-purpose Sports Complex as the returns from each district were transferred via thumb drives, read and then announced by Elections Supervisor Juliette Penn.

Early on, the VIP won key races in districts Five and Seven and the at-large vote counts ticked upwards in the party’s favour. However, it wasn’t until the District Nine returns came in around 10 p.m. that it became official: The at-large races had pushed the VIP over the top.

For some VIP opponents, the biggest surprise of the night came when two seasoned at-large legislators — both of whom were hoping for a shot at premier — were ousted altogether.

Two-time incumbent and NDP Chairman Myron Walwyn — who received a record number of votes in 2015 — finished just out of the top four. That put him at 601 votes fewer than the lowest- scoring victor, the VIP’s Carvin Malone.

Likewise, veteran at-large representative Ronnie Skelton, who had hoped to chart a new course with the NDP offshoot Progressive VI Movement, also lost out to the VIP, finishing 1,297 votes behind Mr. Malone.

When Ms. Penn announced the final winners, supporters leaped out of their seats, pouring into the streets among chants of “Send them home!” referring to the NDP.

“This is a testimony to the resilience of BVIslanders,” VIP supporter Sam Henry said as he stood near a crowd dancing in the street. “Myron Walwyn … isn’t as popular as he thought, and it shows.”

Given the experienced veterans in the at-large races, the VIP achieved perhaps its most impressive coup by sweeping the field with four candidates who had never held legislative office before.

Sharie de Castro, who also ran in 2015, emerged as the top vote-getter among territorial candidates, with 4,778. Finishing close be- hind her were VIP running mates, Neville “Sheep” Smith at 4,694, Shereen Flax-Charles at 4,033 and Mr. Malone at 3,936. All are first-time candidates.

Also key to the VIP victory was their toppling of incumbents in key districts, notably District Seven, in which two-time candidate Dr. Natalio “Sowande Uhuru” Wheatley won by 46 votes, knocking off five-time veteran Dr. Kedrick Pickering, who had left the NDP to run as an independent.

Another major shakeup happened in District Nine, when one-term incumbent Dr. Hubert O’Neal of the NDP was bested by the VIP’s Vincent Wheatley by 567 votes.

Likewise, in District Five, which was without an incumbent after the death late last year of long-time representative Delores Christopher of the NDP, the VIP also came out on top, with first-timer Kye Rymer emerging 242 votes ahead of his nearest challenger, the PVIM’s Wade Smith.

“I think the people spoke,” said Mr. Rymer, describing his feelings as Polling Day progressed. “I’ve been at the polls all day and people came in and voted. As we waited on the results, … I realised the people wanted me to represent them.”

More than anything, Ms. de Castro’s at-large victory — leading three first-time candidates — underscored the overall fresh face of the VIP, in which 12 out of 13 candidates had never held elected office, and only two of those had run before. When the HOA assembles, seven out of 13 seats — all of them on the government side — will be held by first-time legislators.

Ms. de Castro, who made education a linchpin of her campaign, is, at 28, the youngest candidate in the race. She said young voters “most definitely” played a role in the VIP victory.

“The young people came out strong and I’m humbled to be their voice in the House of Assembly,” she said as she marched down the road in front of the Multi-purpose Sports Complex, shouting to be heard among hundreds of supporters.

Those victors, after the loss of Mr. Walwyn, will face the prospect of regrouping under a different leader, who likely will head the opposition.

In statement released Tuesday, the NDP thanked the VI “for joining us along the journey to make our territory better, stronger together.”

“A new government was elected tonight and they are the government for all of us,”he wrote. “I urge all to give them your full support because their success will bring benefits to us all.”

Though the VIP’s victory put to rest speculations about a possible coalition government, it did not clearly resolve the fate of the two-party system that has dominated VI politics for more than 20 years. In recent elections, the VI has seen multiple new parties cropping up (one in 2011 and two in 2015). However, nei- ther those parties nor any inde- pendent candidates have managed to pose a real challenge to the VIP and the NDP, which for two decades traded power under Dr. Orlando Smith and Ralph O’Neal.

But with both of those leaders now retired, the VIP and NDP had fractured, leading for- mer members to launch Progressives United and the PVIM, respectively.

On Monday, each of the two upstarts managed to win a seat.

One was claimed by District Three incumbent Julian Fraser, the former VIP opposition leader who was ousted from the party’s leadership in 2016 and formed the PU last year. By a margin of 225 votes, Mr. Fraser commanded his district’s loyalty for a seventh time.

The other went to former NDP backbencher Mitch Turnbull, now under PVIM, with a much narrower win over his sole Second District challenger, VIP first-timer Carnel Clyne.

Speaking at a PVIM press conference on Tuesday, Mr. Turnbull thanked his “adopted father,” Mr. Skelton, “for giving it one more push.”

“To be re-elected to the House of Assembly for a second term, I am grateful. I am thankful,” he said. “Thank you for your challenge, for your push for me to do better.”

The Virgin Islands Party has won eight of 13 seats in the House of Assembly, according to official election returns released Monday evening by the Supervisor of Elections Juliette Penn.

The results handed the party a clear victory over the ruling National Democratic Party and the necessary majority to form a government headed by Chairman Andrew Fahie.

The splintered NDP managed to retain just three seats. New parties the Progressive VI Movement and Progressives United took one each, both won by incumbents who broke away from the two major parties.

In District One, Mr. Fahie handily beat out his two opponents, the PVIM’s Sylvia Romney-Moses and PU’s Stephanie Brewley.

In District Two, incumbent Mitch Turnbull, a defector to the PVIM after leaving the NDP, narrowly beat out the VIP’s Carnel Clyne to earn his party’s only seat.

In District Three, longtime incumbent Julian Fraser, chairman of the PU, took his party’s only seat of the night with a landslide over challengers Arlene Smith-Thompson of the VIP and Aaron Parillon of the NDP.

In District Five, which had no incumbent, newcomer Kye Rymer of the VIP won a decisive victory over NDP’s Elvis “Juggy” Harrigan, a former District Five representative, and PVIM’s Wade Smith.

In District Six, incumbent Alvera Maduro-Caines of the NDP eked out a narrow victory over the VIP’s John Samuel.

In District Seven, incumbent Dr. Kedrick Pickering, running as an independent, was unseated by the VIP’s two-time candidate Natalio “Sowande Uhuru” Wheatley, who also was victorious over the NDP’s Hipolito Diego Penn.

In District Eight, incumbent Marlon Penn of the NDP easily held onto his seat over his only challenger, the VIP’s Dean Fahie.

In District Nine, Vincent Wheatley of the VIP decisively unseated incumbent Dr. Hubert O’Neal of the NDP and Jose de Castro of the PVIM.