Arguing that employing private corporations with “profit-seeking motives” would not benefit the territory, debaters from Bregado Flax Educational Centre came out the winners in the 2018 Inter Secondary School Debate, …

END_OF_DOCUMENT_TOKEN_TO_BE_REPLACED 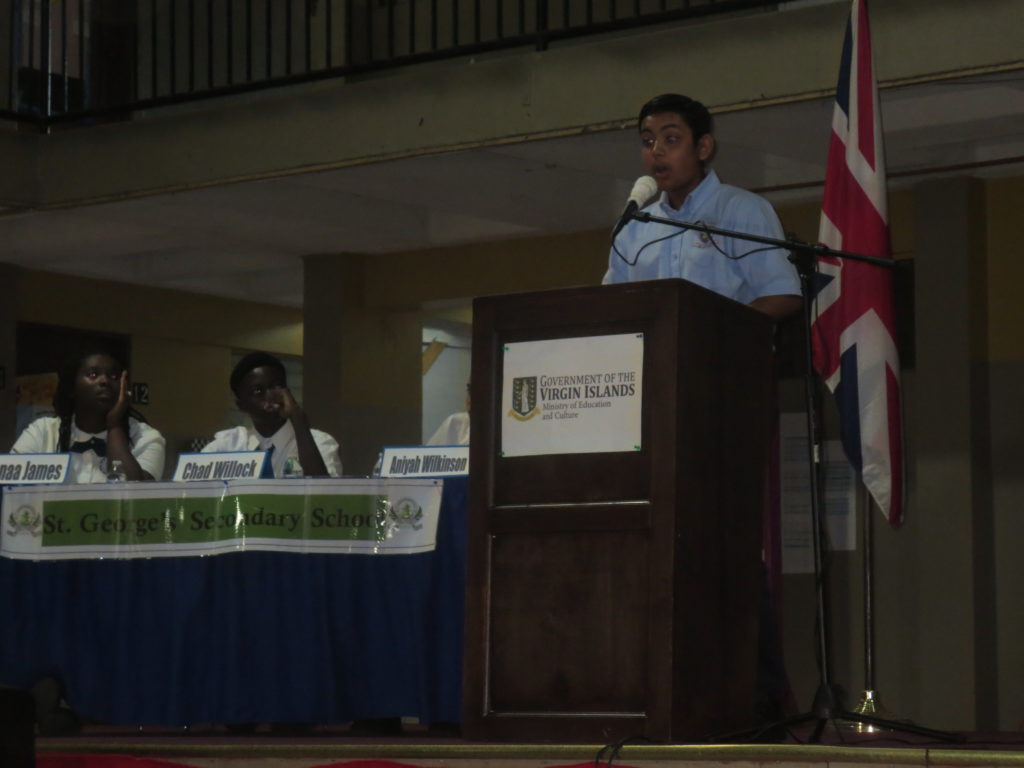 Arguing that employing private corporations with “profit-seeking motives” would not benefit the territory, debaters from Bregado Flax Educational Centre came out the winners in the 2018 Inter Secondary School Debate, edging out the defending champion team from St. George’s Secondary School.

Before a panel of judges, teams argued for and against the moot “Privatisation of the public sector will serve the public interest of the Virgin Islands.”

The proposition, argued by Ra’naa James, Chad Willock and Aniyah Wilkinson of St. George’s, contended that the public sector is out of touch with people’s needs, and suggested that private corporations will serve the public better because their desire to seek a profit means they will treat their customers well.

As an example, Ms. James referenced the US Postal Service, which has over $100 billion in debt and liabilities, while the private FedEx is turning a tidy profit.

Ms. James said that privatisation of such services as the post office “will also ensure that pro- fessional business people will efficiently manage the businesses; in the private sector the working environment is very competitive — an attitude and practice that is missing in the public sector.”

However, the opposition, argued by Kayliah Stevens, Mariah Christian and Ryan Ramlall of BFEC, said that developed countries like the US should not be a reference point for small territories like the VI. According to Mr. Ramlall, such small jurisdictions run the risk of corporations making services “unaffordable and unavailable” to customers. For in- stance, he pointed out, the privatised electricity corporation in Dominica “has increased their rates twice since the devastating passage of Hurricane Maria.”

In their rebuttal, Bregado Flax also reminded the audience that the recent failures involving private telecoms such as FLOW, CCT and Digicel, which receive frequent complaints about spotty service and high prices, suggest that privatisation does not always benefit the public.

At the end of the night, government information officer Bria Smith, part of the judging panel, offered suggestions to the debaters, including modulating their voices and using the entire stage, and finally awarded Chad Willock of St. George’s the Best Speaker prize.

After declaring the winners, Education and Culture Minister Myron Walwyn praised students for putting deep thought into a moot that he called “current and timely,” given that the government has suggested in recent months that privatisation, particularly of the Terrance B. Lettsome International Airport, is being considered. “Although we had some challenging times during this school year, we still wanted to keep the debates going, because through events like these we are able to foster a higher level of thinking among our students,” Mr. Walwyn said.

The debate series, which was part of the larger celebration of Education Week in the territory, began March 14.

It included students from Elmore Stoutt High School, the Virgin Islands Technical School, and the Robinson O’Neal Memorial Primary School, who de- bated moots including “A parental escort policy should be enforced to restrict students under 18 from patronising public establishments during school hours” and “Alternative sources of energy can meet the energy demands of the Virgin Islands.”