Nine resolutions recently approved by the House of Assembly appeared in the Gazette on Oct. 7, finalising an array of HOA decisions such as the addition of millions of dollars …

END_OF_DOCUMENT_TOKEN_TO_BE_REPLACED 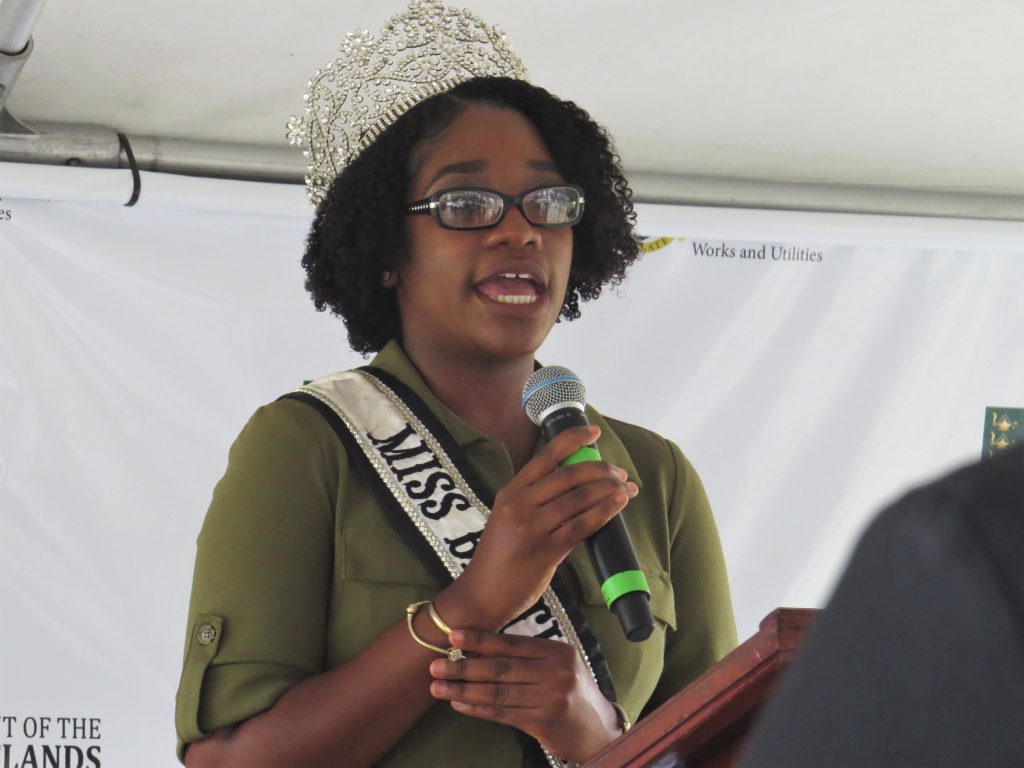 Miss BVI Bria Smith sings the Territorial Song during a government ceremony on Monday in Road Town. “Oh Beautiful Virgin Islands,” written and composed by Ayana and Kareem-Nelson Hull, will be played in place of “God Save the Queen” at regional and international sports events per a resolution Gazetted Oct. 7. (Photo: DANA KAMPA)

Nine resolutions recently approved by the House of Assembly appeared in the Gazette on Oct. 7, finalising an array of HOA decisions such as the addition of millions of dollars to the territory’s 2020 budget.

Included in the resolutions was a schedule for adding nearly $77 million to the 2020 budget.

Legislators said this additional spending largely came from financial demands associated with the Covid-19 pandemic. The biggest additions were to the Ministry of Health and Social Development’s operations budget, at $42.8 million, and to capital works at the Ministry of Transportation, Works and Utilities, at $28.6 million.

In comparison, the House confirmed the addition of only $15.6 million to the 2019 budget, as laid out in a resolution also Gazetted on Oct. 7. The supplementary appropriations breakdown that year was $11,351,880 for recurrent expenditures, $3,987,939 for capital acquisitions, and $316,000 for development.

The House approved the act in April, upping the enforcement of safety regulations on the water and placing the territory in a better position ahead of its audit from the International Maritime Organization, according to legislators.

Under the act, the governor has the power to enact regulations subject to approval by the House.

The first set of new regulations outlines the inspection process for ships anchored in Virgin Islands waters to make sure they are following international conventions regulating pollution prevention and safety standards.

The second set of regulations concerns accident reporting and investigation. They state unequivocally that ship owners have the responsibility to report marine casualties to the “chief marine accident investigator” as quickly as possible. They also lay out a Casualty Investigation Code to be followed from now on.

Another resolution Gazetted Oct. 7 related to the role of HOA opposition member Mark Vanterpool as an elected official and businessman. Mr. Vanterpool was officially allowed to retain his seat after recently disclosing two business interests.

OneMart and government entered into a contract worth $869,773 on July 21 to provide food packages and sanitary supplies to Virgin Islands community members from March to May during the Covid-19 pandemic lockdown.

Shoreside Development received a transfer of 0.125 acres of government-leased land from the estate of Lilian Romney. The value of the land was not disclosed in the Gazetted resolution.

The HOA determined on Sept. 22 that these interests did not preclude Mr. Vanterpool from serving as an elected representative.

Also Gazetted Oct. 7 was a resolution to temporarily waive the stamp duty for belongers interested in purchasing property. On Aug. 13, Cabinet amended the Statutory Rates, Fees and Charges (Amendments of Schedule) (No. 2) Order, 2020, suspending the stamp duty for the sale or transfer of land to a belonger. As part of some legislative housekeeping, the HOA recently passed the resolution, which updated the order to allow for the stamp duty waiver.

Another resolution Gazetted Oct. 7 requires the territorial song “Oh Beautiful Virgin Islands” to be played in place of “God Save the Queen” at regional and international sports events. It also grants the International Olympic Committee the right to use the song at future official events where participants representing the Virgin Islands receive medals.

A final resolution finalised Deputy Premier Dr. Natalio “Sowande” Wheatley’s appointment of Dr. Arthur Richardson as chair of the Higher Education Licensing Board as of Aug. 1.