Since its inception in the late 1990s, the BVI Cancer Society has been dedicated to supporting residents diagnosed with any kind of cancer. But with some residents mistakenly believing the …

END_OF_DOCUMENT_TOKEN_TO_BE_REPLACED 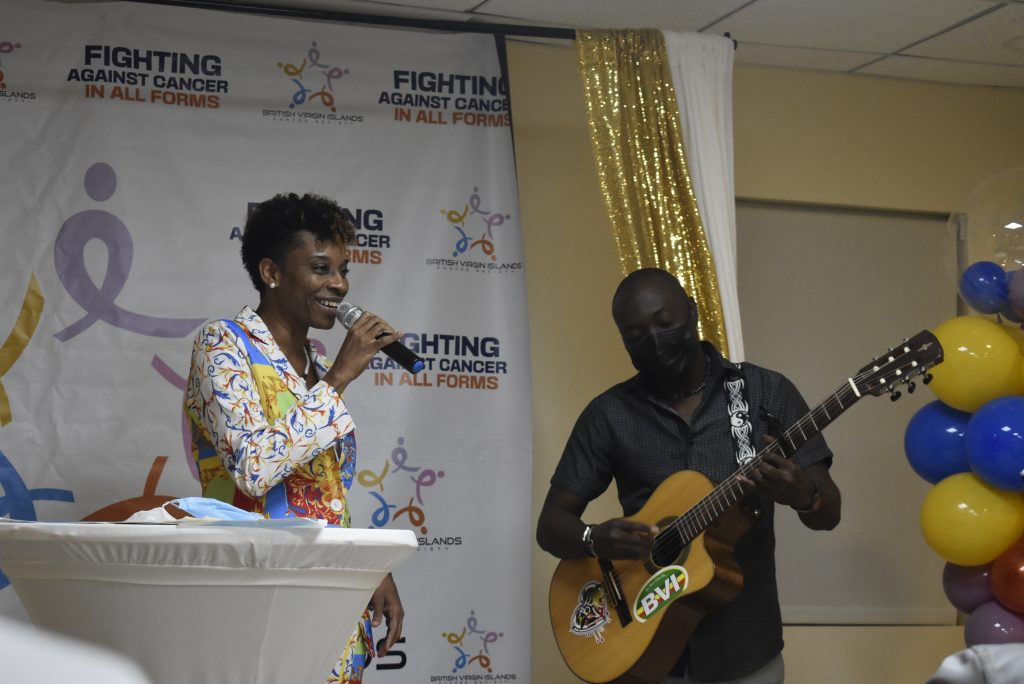 Since its inception in the late 1990s, the BVI Cancer Society has been dedicated to supporting residents diagnosed with any kind of cancer.

But with some residents mistakenly believing the organisation is only for breast cancer patients, a new rebrand seeks to remind the public of its central mission, President Gloria Fahie said during a Friday evening press conference at Village Cay.

“We plan to take more action, we plan to give more financial support, and we are going to commence some lobbying,” Ms. Fahie added, eliciting laughter as she glanced at Health and Social Development Minister Carvin Malone.

While unveiling the society’s new logo and slogan — “Fighting Against Cancer in all Forms” — Ms. Fahie explained that the design was meant to reinforce the new branding.

The five-coloured ribbons, which form a sort of diamond, each represent various forms of the disease, highlighting the organisation’s inclusivity, she added.

The BVI Cancer Society was founded in the late 1990s by breast cancer survivor Astrid Wenzke and the daughters of two of her friends who had both succumbed to breast cancer within six months of each other, Ms. Wenzke said during a Monday interview.

At first, the society focused on educating cancer patients about what lay ahead, but with steadily increasing public support, it grew into an organisation that provides all manner of financial, mental and emotional support to cancer patients, Ms. Wenzke said.

“Seeing what the Cancer Society has come to now, I’m really overjoyed,” she said. “It’s amazing the support the society is getting from the public.”

She also lauded the rebranding, saying it was a necessary reminder that the society is there to help anyone diagnosed with cancer, not just women or breast cancer patients.

Ms. Wenzke also said men are often more reticent than women to seek help from the society or seek medical attention in general — something she hopes will change, given that early detection can often mean a good chance of beating the disease.

“With cancer, you can’t fight it alone. … You need help in a way that builds you up,” she said.

“Look at me: I had cancer twice and I didn’t die, and you don’t have to die.”

Although the presenters did not downplay the seriousness of the society’s mission, the mood throughout the roughly hour-long event was celebratory and hopeful, with song and prayer interspersing the speeches.

Frankie Rathanum, the senior pastor at Tower of Faith Ministries, opened the service with a prayer, which was followed by a cappella performances of the territorial song and national anthem by 2019 Gen-Y Factor winner Dwight Hutchinson Jr.

The night had extra significance for government Communications Director Arliene Penn, who got the crowd singing with a gospel performance aided by her former classmate Oren Hodge, who strummed a guitar.

Friday was Ms. Penn’s wedding anniversary, and she recalled how she met her future husband just ten months after beating cancer, and how willing he was to support her as a survivor.

“I’m a 17-year cancer survivor; we’ve been married for 16 years,” Ms. Penn said to a round of applause. “[Mr. Hodge] lost his dad to colon cancer, and I’m a cervical cancer survivor, so it gives us great pleasure to be here this evening and to just praise God.”

Premier Andrew Fahie took the microphone after Ms. Penn, announcing that he and Mr. Malone had jointly donated $500 to the cause.

He also relayed the struggles of family members who have fought cancer, and offered an encouraging metaphor based on a conversation with his “ministerial advisor,” comparing fighting cancer to driving from Road Town to West End at night.

“You have to use some kind of light in the car … to help you go where you’re going, but the light doesn’t shine from [Bobby’s Supermarket] straight to West End,” Mr. Fahie said. “It only shines every 100 yards. But you have to have the determination not to give up and keep driving, knowing that every 100 yards becomes clearer.”