The average mortality rate for infants under 28 days old in the Virgin Islands in the past five years is around 9.52 per 1,000 live births. That’s better than the …

END_OF_DOCUMENT_TOKEN_TO_BE_REPLACED 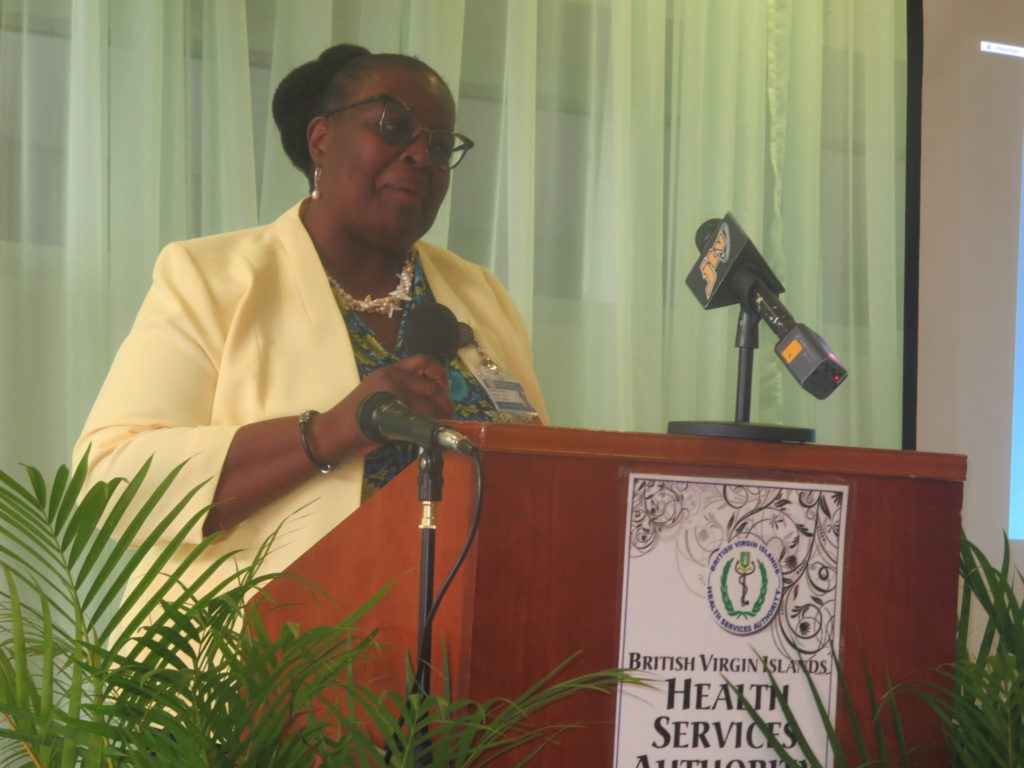 Gretchen Hodge-Penn, director of nursing for the BVI Health Services Authority, speaks to attendees of the Perinatal Conference in the lobby of Peebles Hospital on May 2. (Photo: CLAIRE SHEFCHIK)

The average mortality rate for infants under 28 days old in the Virgin Islands in the past five years is around 9.52 per 1,000 live births.

That’s better than the worldwide rate of 19 and the Caribbean and Latin American rate of 16.1, according to Dr. June Samuel, chief of medical staff at the BVI Health Services Authority — and she thinks it’s high time people knew that.

“We still don’t tell our stories,” she said on May 2 during the opening of the territory’s first Perinatal Conference, a three-day event hosted by the Women and Children’s Health Division.

The perinatal period stretches from 22 completed weeks of pregnancy to seven days after birth, according to Dr. Samuel.

The event, she said, was an opportunity to begin celebrating the fact that the BVIHSA is “doing good things and having good clinical outcomes in spite of limited resources, stretched human resources and sometimes not enough public support.”

“It is good,” Dr. Samuel said of the VI’s record. “But maybe we need to dig deeper, and that is what this conference is about.”

Dr. Samuel added that she wishes to encourage a “critical look” at the data, “so we know where we need to improve.”

When a baby comes early

BVIHSA CEO Paula Chester-Cumberbatch showed attendees photos of a baby named Marcellus, who was born at 28 weeks at a birth weight of just over 2.5 pounds. He went home with his family three weeks ago.

“The birth of a baby is usually a joyous event, but when a baby is born too early there are some complications that may occur, including serious health problems for the baby and steep medical bills for the family,” she said. “The role of the staff in such circumstances is usually questioned, and a label is usually placed on the health of a country and its population.”

The conference, she added, was an attempt to mitigate such difficulties and celebrate successes.

In the VI, Ms. Chester-Cumberbatch said, “We have an average of 265 deliveries a year with an average of one to two stillborn infants.”

That rate is “something that we need to applaud,” she added. “For the region, that is something that many countries are trying to achieve.”

Gretchen Hodge-Penn, BVIHSA director of nursing, added, “We are going to be honouring [midwives] … and the myriad things they do every day to contribute to the well-being of mothers and children around the world.”

The 68 midwives licensed to practise in the territory, who include nurses and nursing assistants, deliver 44 percent of babies here, according to Jacinth Hannibal, the BVIHSA’s chief nursing officer.

“In nations where there is a dearth of midwives, babies die and mothers die in childbirth,” Ms. Hannibal said. “The impact of quality midwifery care is well documented. Therefore the call now for midwives to lead the call for quality care is timely and apt.”

“The minister is proud that this team continues to grow and continues to perform at an excellent rate, delivering care to mothers and children in their early stages,” Mr. Turnbull said, adding, “While there are many initiatives under way to further improve maternity services in the BVI, there will always be more that we can do.”

Therefore, some of the plans discussed at the conference included reducing perinatal trauma during birth; improving mother and infant bonding; and improving access to birth preparation classes.

“While we feel that we are doing great, we can always do better,” she said.