Bags of sargassum, debris and other trash lined the shores of Trellis Bay after two dozen people from six yachts spent about two hours cleaning the area last Thursday. Visiting …

END_OF_DOCUMENT_TOKEN_TO_BE_REPLACED 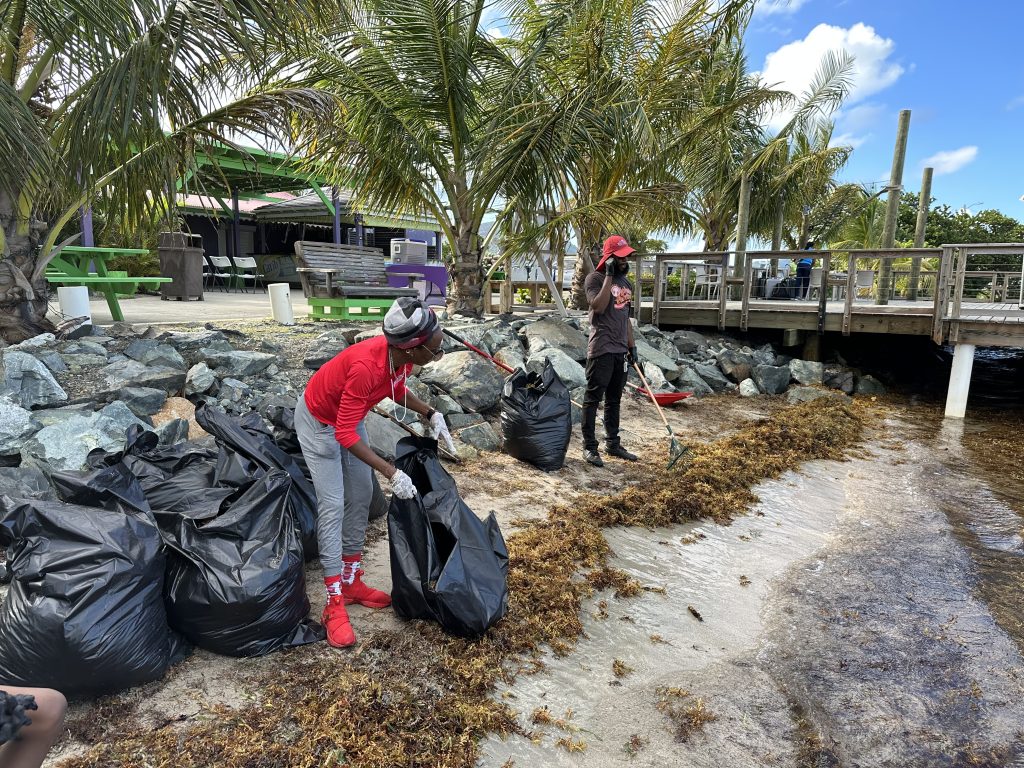 Volunteers from the BVI Tourist Board and Film Commission, The Moorings and Sunsail spent two hours working with other community members last Thursday to clean up the beach at Trellis Bay. (Photo: PROVIDED)

Bags of sargassum, debris and other trash lined the shores of Trellis Bay after two dozen people from six yachts spent about two hours cleaning the area last Thursday.

Visiting employees from The Moorings and Sunsail — who were in the territory for a company sailing trip — began cleaning up the beach and coastline at 2 p.m. and finished around 4 p.m.

“We’re trying to do more private-public partnerships where we do activities to enhance the tourism product, and this was one we thought would be beneficial to the area,” said Tourism Director Clive McCoy. “We want people to know that tourism is everybody’s business, and it starts with us, the industry partners, as well as the BVI Tourist Board.”

The beach cleanup included about 24 participants from a flotilla of six yachts. The group first set sail together from Norman Island on Dec. 10 for a six-day voyage around the Virgin Islands.

British sailor Dee Caffari — who has sailed around the world a total of six times — was among the crew. The tour culminated with the beach cleanup.

Deputy Tourism Director Rhodni Skelton led an additional group of volunteers from the BVI Tourist Board and Film Commission to assist the sailors.

Also among the volunteers was 12-year-old Shaequan Stoutt from the Enis Adams Primary School, who earned community service hours toward his graduation requirements.

Staff from the Loose Mongoose and Trellis Bay Market provided refreshments while Quorum Group representatives and VI realtor Edward Childs helped remove almost 100 bags of trash, debris and sargassum, according to the BVITB.

“The cleanup was something the yachting sector brought to us as an idea, and it fits right into what our goal is at the Tourist Board,” Mr. McCoy said. “We are encouraging other industry partners to come up with different initiatives with us. We definitely want to support them.”

He added that the BVITB will be doing more community service activities that will help “beautify” the territory.

“We have to be proactive,” he said. “We have to come together and deal with [challenges] before they become major problems. Together we can make the VI the number one destination around the world.”

Mr. McCoy said the BVITB will focus on such initiatives in 2023.