After about 14 years of using Delta Petroleum as its primary fuel provider, the BVI Electricity Corporation has awarded SOL St. Lucia Limited a contract to provide fuel for Tortola’s …

END_OF_DOCUMENT_TOKEN_TO_BE_REPLACED 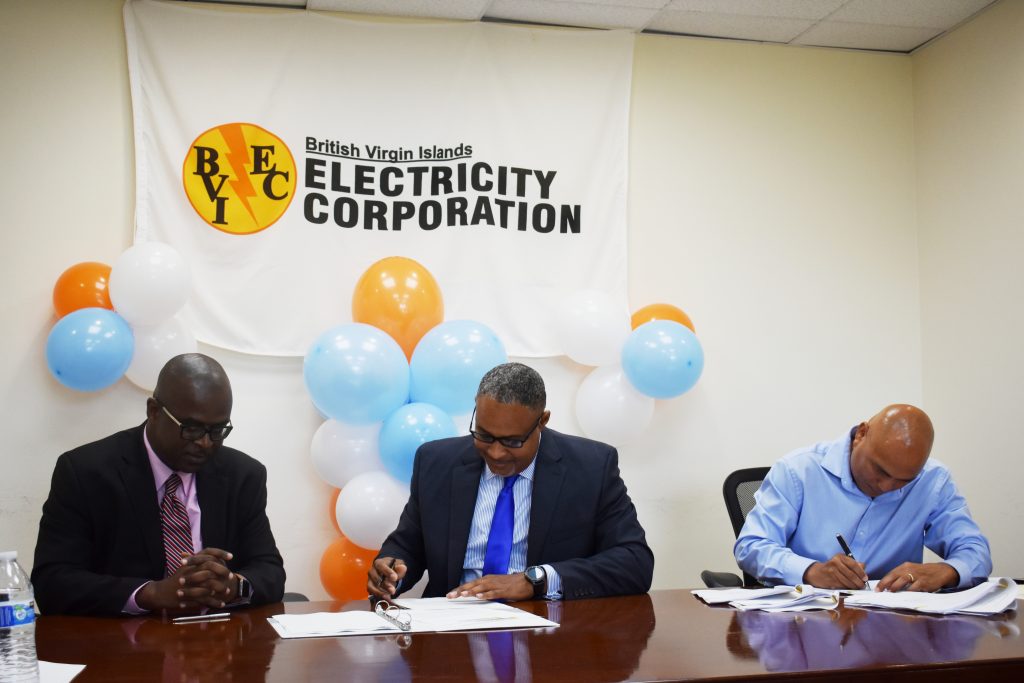 After about 14 years of using Delta Petroleum as its primary fuel provider, the BVI Electricity Corporation has awarded SOL St. Lucia Limited a contract to provide fuel for Tortola’s main power station for the next three years.

All told, the contract is worth about $35-$40 million, depending on fluctuations in the cost of oil, BVIEC General Manager Leroy Abraham estimated during a Dec. 20 signing ceremony at the corporation’s Long Bush location.

SOL representative Rufino Lin signed on behalf of the company, while the BVIEC was represented by Mr. Abraham and Chairman Ron Potter.

Mr. Lin noted that SOL’s relationship with the BVIEC “spans many years,” and that SOL has “always participated in the public tender process.”

Asked why SOL had been selected rather than Delta, Mr. Abraham said, “What SOL did right was present a very attractive cost.”

He added that while Delta’s offer was not unattractive, it was “not as attractive as SOL’s.”

The $35-$40 million deal differs markedly from the bids disclosed during a public tender opening in July, but BVIEC officials explained that the final agreement had been reached after subsequent negotiations with SOL.

In a Jan. 8 e-mail, Mr. Abraham said it was “difficult to advise the value of these contracts” because they are “associated with various indexes and formulas” and based on estimated values.

“However,” he added, “if your team was present at the [July] tender opening then you can safely use those values, bearing in mind that a thorough analysis is conducted to determine the ‘real’ costs.”

Asked to clarify the discrepancies between the contracts awarded and the bids, he provided a new list of numbers that he said were Delta’s July bids:

Asked about the further discrepancies in the numbers, Mr. Abraham reiterated that the BVIEC could not provide the value of the Delta contracts “as they are associated with various indexes and formulas.”

A version of this article first appeared in the Jan. 10, 2019 edition.