In March, United States solar developer Rob Wallace Jr. told the Beacon that he planned to begin construction on the Anegada hybrid solar grid this month, and that the plant …

END_OF_DOCUMENT_TOKEN_TO_BE_REPLACED 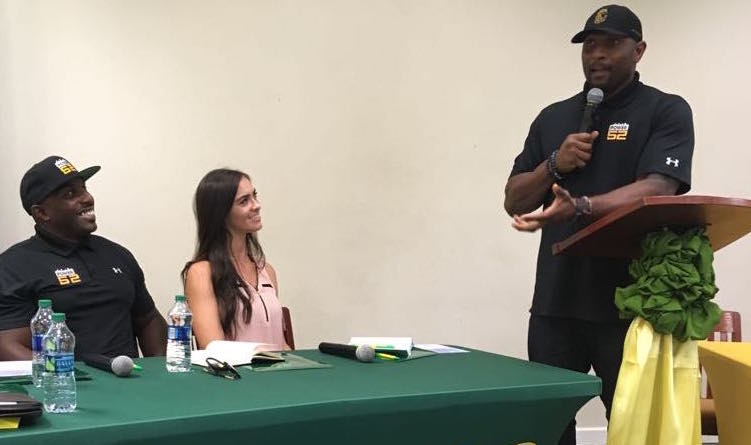 United States solar developer Rob Wallace Jr., left, and NFL Hall of Famer Ray Lewis, right, were introduced to the Virgin Islands when they announced their solar technician training programme in January 2020. About six months later, they were named the winners of a tender to build the territory’s first utility-scale solar project by November 2021. However, no planning documents have been submitted to the Town and Country Planning Department, and neither Mr. Wallace nor BVI Electricity Corporation officials responded to Beacon queries about when work will start. (File Photo: JOEY WALDINGER)

In March, United States solar developer Rob Wallace Jr. told the Beacon that he planned to begin construction on the Anegada hybrid solar grid this month, and that the plant would be operational by the end of November in keeping with a deadline first set when his company was announced as the winner of the $4.6 million contract in July 2020.

But construction has not started on the sister island, and the Town and Country Planning Department has not received any documents related to the project or granted planning permission to Mr. Wallace’s firm, Power52 Clean Energy Access, said Chief Planner Greg Adams.

It is also unclear if a contract has even been signed for the project, which was expected to employ several of the 38 graduates from a recent training programme that Mr. Wallace offered in partnership with H. Lavity Stoutt Community College.

Mr. Wallace told the Beacon on March 1 that he and the BVI Electricity Corporation were still hashing out the contract’s details, including whether Power52 would be paid to build the grid or finance construction itself and then sell the energy back to the utility at a fixed price over time.

But he and BVIEC officials did not respond to requests for comment for this article, and a clerk at the High Court Registry said on May 27 that a search for contracts involving Power52 and its partners did not yield any results.

At Town and Country Planning, Mr. Adams said he didn’t know when construction could begin because he had not received any documents pertaining to the project and therefore had no knowledge of its scope.

Asked if the project would require an environmental impact assessment — which is generally costly and time-intensive to prepare — Mr. Adams responded, “No one has spoken to me … in this capacity professionally or personally.”

However, he added that some projects can be exempted from the requirement to obtain planning permission, though because he did not know the details of the Anegada proposal he didn’t know if it falls into this category.

The Physical Planning Act 2004 permits the government minister responsible for planning to exempt “any class of development” from the requirement to obtain development permission — but only with approval from the legislature, which has not publicly approved any such exemption for the Anegada project.

After Power52 Clean Energy Access was announced as the winner of the $4.6 million contract last summer, Premier Andrew Fahie said it had been selected through a “rigorous” and “transparent” tender process.

But three of the four losing bidders claimed otherwise, painting a picture of a bidding process that lacked transparency and bypassed standard tender procedures outlined in the 2005 Public Finance Management Regulations.

And Mr. Wallace has been sued repeatedly in Maryland, where courts recently have ordered him to pay more than $1.2 million to people who allege that he defrauded them, broke his contracts, and refused to pay his bills, among other alleged misconduct sometimes associated with work similar to the project he is expected to carry out on Anegada.

While working on a section of a 10-megawatt solar grid built by his father’s company on Maryland farmland, for instance, Mr. Wallace came under fire from companies that claimed that he failed to keep construction moving on schedule and racked up debts.

The next year, Terrapin Branch Solar, a subsidiary of Boston renewable energy company Nexamp, filed a related suit, claiming that Mr. Wallace had missed construction deadlines, failed to pay subcontractors, and committed fraud by signing contracts without Nexamp’s authorisation, among other allegations.

“We hired Power52 to provide turnkey construction services on the … project in Maryland, but the company did not complete the project as expected and failed to pay its subcontractors in a timely fashion for the work performed,” Keith Hevenor, Nexamp communication manager, told the Beacon last December.

In total, Nexamp and MB Haynes alleged eight counts against Mr. Wallace, and in October 2019, a judge sided with the complainants, entering default judgments in their favour and ordering Mr. Wallace to pay more than $900,000 to the two firms.

In interviews with the Beacon in March, Mr. Wallace roundly denied most of the claimants’ allegations, claiming that he didn’t commit fraud or miss construction deadlines.

While he did concede that some subcontractors, including MB Haynes, hadn’t been paid in full, he blamed the delays on an unexpected change in a local tax code.

Mr. Wallace told the Beacon at the time that this issue would soon be rectified, allowing him to clear the debts with his unpaid subcontractors.

However, he could not be reached for interviews this month.

During a May 20 press conference, the premier blamed the project delays on the Covid-19 pandemic.

Asked when construction would begin, Mr. Fahie declined to speculate.

“I don’t want to give you a false time,” he said. “I want to be accurate when I speak.”

He also said that he stood by his earlier statements that the tender process was “rigorous” and “transparent” despite the allegations against Mr. Wallace, explaining that those statements were based on information provided to him by the BVIEC.

‘On the other hand’

However, he indicated that he is committed to looking into the allegations.

“I’ve learned in life never to eliminate someone based on one opinion,” Mr. Fahie told a Beacon reporter at the press conference.

“I am sure that you have done your research, but I’m also sure if you do some research on the other hand we may come up with something else that I’ll be able to answer … more in depth within a month or two.”