As part of ongoing efforts to market the territory’s financial industry, BVI Finance has commissioned a new report that touts the sector’s contributions and explores how it may adapt to …

END_OF_DOCUMENT_TOKEN_TO_BE_REPLACED 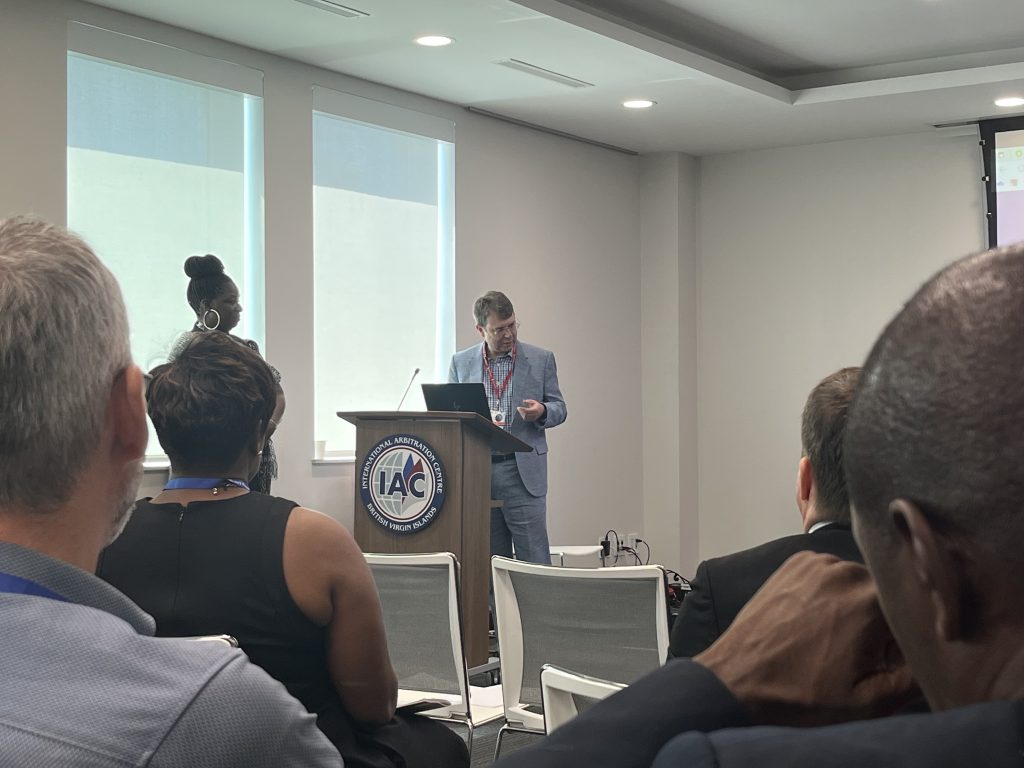 On Tuesday, Pragmatix Advisory Director Mark Pragnell discussed the state of the Virgin Islands’ financial services industry and its future at the Globalisation: BVI Beyond Conference at the BVI International Arbitration Centre. (Photo: ZARRIN TASNIM AHMED)

As part of ongoing efforts to market the territory’s financial industry, BVI Finance has commissioned a new report that touts the sector’s contributions and explores how it may adapt to coming changes in the global economic landscape.

The report, which was released Tuesday during Financial Services Week, was commissioned from the United Kingdom-based consulting firm Pragmatix Advisory, which also produced the recent BVI360 “fact-based content series” for BVI Finance.

The report’s authors noted six “key findings” about the VI’s role in the global economy and its place in an uncertain future.

The territory’s domestic economy is “sound, balanced and stable,” the report states, adding that the jurisdiction offers a “net benefit” to countries worldwide “due to the scale of its contribution to investment and jobs.”

Holding assets worth $4.1 trillion, the VI financial industry also “provides jobs and incomes to 5,000 people from countries in the wider Caribbean region,” as well as supporting around 12,000 jobs in the United States “through its imports,” the consultants found.

Additionally, the sector supports 2.3 million jobs globally through investment mediated through VI-registered companies, with China, Macao and Hong Kong accounting for about half of them, the report states, adding that about one in 10 of these jobs are located in Europe.

“Looking into an uncertain future, … there are many difference scenarios for geopolitics and economics, but the need will remain for expert, neutral and innovative centres like the British Virgin Islands to support cross-border trade, investment and mobility,” the report adds.

Pragmatix Advisory Director Mark Pragnell, a macroeconomics consultant who co-authored the report, spoke on Tuesday during the Globalisation: BVI Beyond Conference at the BVI International Arbitration Centre.

“It’s important for people here to understand the contribution the finance sector makes, both directly to jobs but also to the prosperity of the islands to the extent to which they help fund public services here,” said Mr. Pragnell, noting that the industry currently contributes about 60 percent of government revenue. “The second reason why [the report] is important to the territory is because it helps to better explain [the industry] to the external world.”

Mr. Pragnell has almost 30 years of experience “applying economics and business research techniques to markets, industries and public policy,” according to the Pragmatix website, which also explains that the firm helps “trade associations, public bodies and businesses overcome their biggest challenges through the intelligent, pragmatic use of research and analysis.”

BVI Finance — which is funded by government and industry contributions — declined to disclose the cost of the report, but CEO Elise Donovan described it as “important work.”

“It was worth the investment that BVI Finance made to have this high-level quantitative and qualitative research to present to our key stakeholders and to take proactive steps to sustain and increase the value of the BVI’s international business and finance centre in the global economy,” Ms. Donovan told the Beacon.

In 2017, BVI Finance commissioned a similar report from another UK firm, Capital Economics, where Mr. Pragnell then served as head of commissioned projects, according to his LinkedIn profile.

That report stated that VI-registered companies held $1.5 trillion in assets at the time and helped support roughly 2.2 million jobs globally.

The Capital Economics report cost $154,000, with two-thirds funded by government and the rest by the private sector, BVI Finance said at the time.

One aim of the new report, Mr. Pragnell said Tuesday, is to explore what the future of globalisation will hold for the VI by better clarifying what the territory contributes to the world.

“So obviously, the BVI sometimes has had either good or bad press internationally in terms of the big label: ‘the tax haven,’” he said, noting that leaks such as the Panama, Paradise and Pandora papers have shaped public perceptions of the territory. “But that masks actually what goes on here, which is fundamentally that this jurisdiction is used to help broker international trade, international finance for legitimate purposes — all of which helps make sure that investment money goes to the right places globally and stimulates jobs and growth globally.”

Whatever form the global economy takes in the future, Mr. Pragnell predicted that it will bring opportunities for the VI.

“The trouble is that it all involves making some quite tough decisions about what direction the [international financial centre] and the jurisdiction goes in order to capitalise on whatever the trends are moving forward,” he said. “And so this report will help inform the IFC in those decisions and kind of guide some of the things that they should be thinking about.”