With the worst of the pandemic in the rearview mirror, the BVI Health Services Authority announced on Nov. 24 that it is refocusing its efforts on bolstering non-emergency care and …

END_OF_DOCUMENT_TOKEN_TO_BE_REPLACED 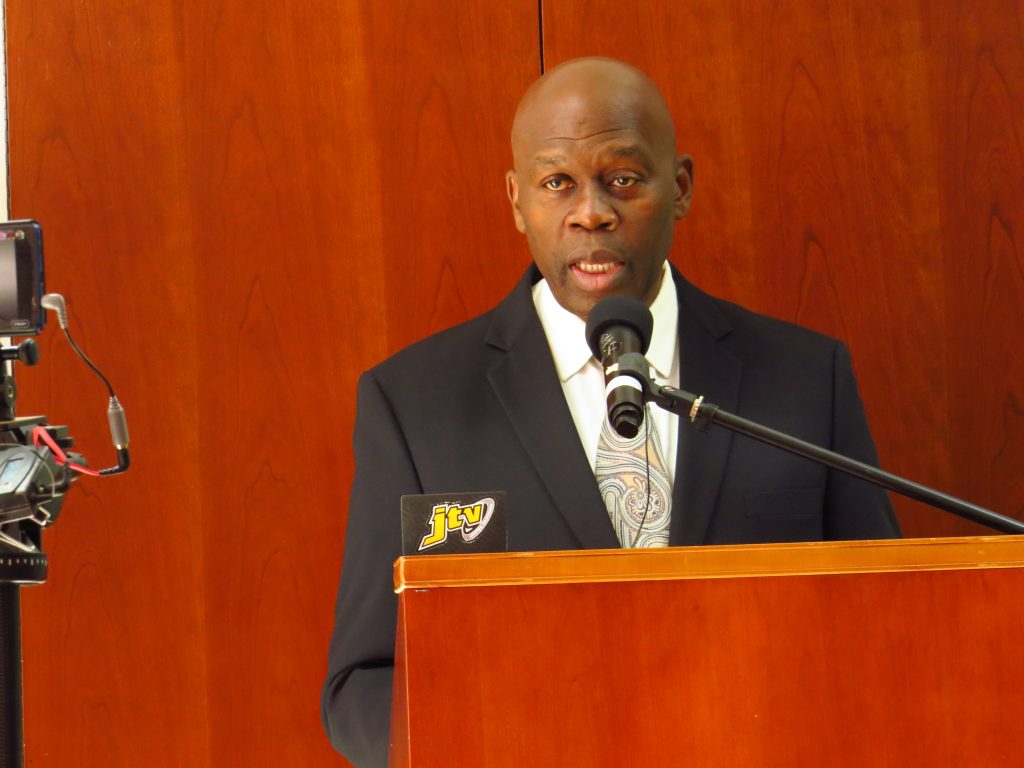 BVI Health Services Authority Chairman Moleto Smith Jr. speaks during a press conference on Nov. 24 about the agency’s plans to shift focus from pandemic management and acute care to the long-term needs of the community. (Photo: DANA KAMPA)

With the worst of the pandemic in the rearview mirror, the BVI Health Services Authority announced on Nov. 24 that it is refocusing its efforts on bolstering non-emergency care and addressing staff concerns about burnout and financial issues.

BVIHSA leaders including Chairman Moleto Smith, Deputy Chairman Dr. Karl Dawson, and acting CEO Dr. June Samuel hosted a press conference on Nov. 24, where they announced plans to work with the public to ensure community members’ healthcare needs are being met in the long term.

Mr. Smith took up the leadership role in July 2021 amid one of the territory’s highest peaks of Covid cases. Since then, he said, the board has met approximately 60 times, and members have decided to set strategic goals over the course of the next two years to create a clear path for growth as the BVIHSA shifts focus from the pandemic. One of those goals includes maintaining the authority’s accreditation, the next review for which is scheduled a few months into the new year, according to the chairman.

Another area for planned improvement is staffing. Mr. Smith said the BVIHSA is working to develop “creative and effective strategies to recruit and retain healthcare professionals.”

“After the hurricanes, the HSA lost close to 100 employees, many of whom were nurses and other key providers,” he added. “This has been compounded by the global pandemic, where healthcare and healthcare workers have been at the forefront of protecting not only the BVI community, but the world overall because it was — it is — a global pandemic. There is currently a strain on recruitment and retention worldwide. The BVI is no exception.”

Dr. Samuel said the healthcare sector remains attractive to many new employees, but much of the Caribbean has been facing significant challenges when it comes to recruitment. The VI, she added, must face these challenges head-on to ensure the community’s needs are met.

However, Mr. Smith also noted the challenge of enhancing recruitment while dealing with budget constraints.

In fact, he said a hiring freeze has been in place for “noncritical” positions since around June, and there is no end in sight without significant financial change.

To help address such issues, he said, the BVIHSA is working to ensure that it is deploying its existing staff as efficiently as possible. However, such efforts can only go so far, he acknowledged.

“It is no secret that healthcare financing in the BVI is a significant challenge,” he said.

He added that the authority is in discussions with the Social Security Board and National Health Insurance about financial reform.

The need for such reforms has been raised repeatedly over the years by leaders including Health and Social Development Minister Marlon Penn. Asked what makes this time different, Mr. Smith said healthcare expenses that are primarily funded through NHI “far outpace the revenues” the system brings in.

Mr. Smith said the organisation plans to hold a series of community meetings throughout the territory to hear directly from residents about what they want from healthcare services, particularly when it comes to preventative care.