BVI Olympic Committee President Ephraim Penn recently answered some questions about how the Covid-19 pandemic is affecting sports in the territory and its Olympians. Below are his responses. When do …

END_OF_DOCUMENT_TOKEN_TO_BE_REPLACED 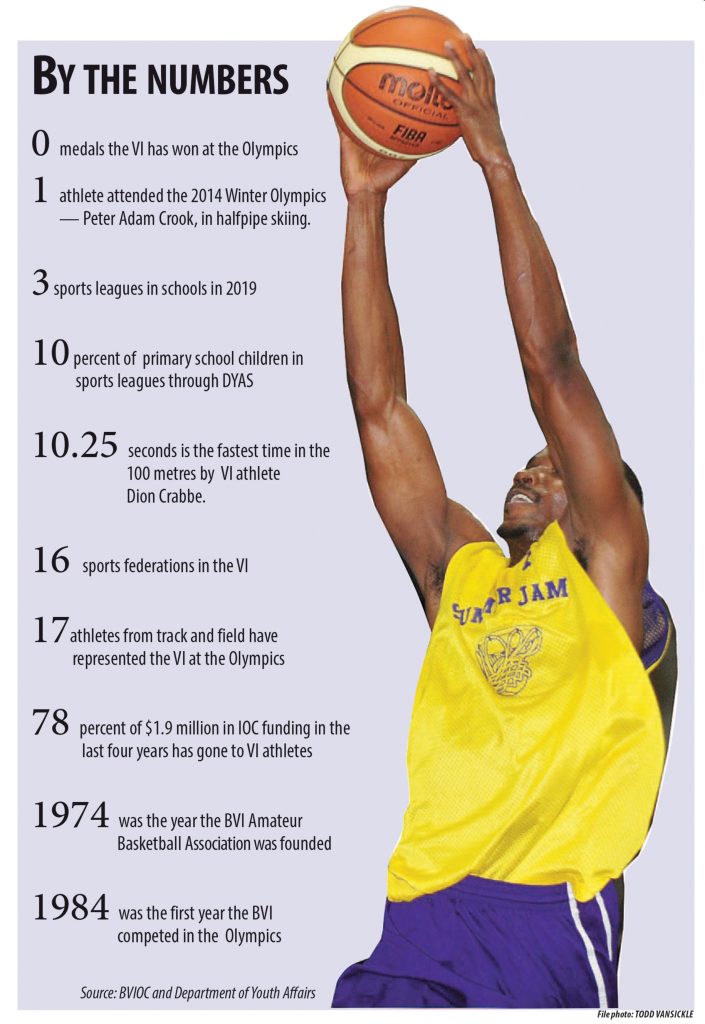 BVI Olympic Committee President Ephraim Penn recently answered some questions about how the Covid-19 pandemic is affecting sports in the territory and its Olympians. Below are his responses.

When do you think sports federations can start hosting events again?

We recognise that we are living in a fluid time as we have to adapt to whatever situation the Covid-19 virus forces us into, so we can’t give a date or timeline on when events can be hosted again. Once things seem to stabilise, we and sports federations will have to be guided by the policies of the government regarding gatherings and accessibility of facilities.

What should fans and athletes expect when sports do return?

Fans should not expect to see any meaningful competitions in the early stages of a return to sports. I foresee it as a being a period of reconditioning for the athletes and a recreational period for most members.

Do you think fans should be permitted to attend sporting events in the early stages of reopening?

The last thing we want is to have this period of sacrifice and then go out and be reckless, so any fan attendance at events will be guided by the policies of the government regarding gatherings and the standard protocol established by the World Health Organisation.

Has the BVIOC received any guidance from anyone or entity with how to proceed during the pandemic?

The BVIOC attended a few Zoom meetings hosted by the IOC, Panam Sports and CACSO as the pandemic took hold and organisers were forced to reschedule the Tokyo 2020 Games for the health and safety of the athletes and the wider global community. We also received communication from Panam Sports and IOC, who relaxed their criteria for the disbursement of funds to allow NOCs the flexibility to use their allocations in a manner that will best suit their communities to ensure some level of activity and engagement by national federations with their members during this period.

Is the BVIOC currently offering member federations guidance during this period?

We have set up a WhatsApp group chat to disseminate relevant advice and information received from Panam Sports and the IOC. We also use this platform to provide regular updates on any policies or developments that may affect national federations as well as communications designed to encourage all the federations to remain engaged with their members. It’s been heartening to see that for the most part, national federations have been very active during this period.

Has the IOC put any additional requirements in place for the postponed Tokyo 2020 Olympics?

IOC hosted Zoom meetings to re-emphasise to the NOCs their commitment to hosting the games and the health and safety of the attending athletes and spectators to the rescheduled Summer Olympics. The recurring message thereafter is a request for NOCs to remain engaged with the national federations which are sending athletes to the games and to reassure the athletes and to encourage them to remain focused during these difficult and dark times and to make these games a testimony to the victory of humanity in times of adversity.

What are some of the concerns, if any, that have been expressed by federations or athletes during the pandemic?

Concerns from the senior athletes slated for Tokyo 2020 include loss of income that they would have earned as professional athletes and a hope that they may count on the continued support from the BVIOC, government and the community. They face a great deal of anxiety about the future. Hence the decision to choose sports psychology as the first workshop to be hosted on May 12 by the recently established BVIOC Athletes’ Commission.

We also have a couple of national federations who have expressed a concern at the lack of engagement from their members, which may be reversed as restrictions are lifted and businesses and schools start to reopen.

How important are sports to the territory? From a psychological, health and financial standpoint?

At this stage, it’s more about physical activity than organised sports since all the leagues and events on the sporting calendar locally, regionally and internationally were postponed or cancelled — including plans for the OECS Championships, which had to be shelved.

The BVIOCAC has recognised that the abrupt halt in sports has been a psychological challenge not just for athletes but also for coaches and parents which is why they chose the topic of sports psychology for their first live virtual work shop.

Sports and any physical activity is a proven way to release stress which is at an all-time high right now for people of all ages — whether it’s driven by financial, academic or social factors. It’s also a big issue for students who don’t have [physical education] or their sports clubs to turn to to release energy, catch up with their coaches, who might also be their mentors, and it’s been an enforced break from meeting up with their friends in a healthy environment.

Health issues can also arise because of restrictions on movement. Thankfully, we see this easing as people are now allowed to go out and exercise on their own. There are a large number that have taken advantage of this. I personally am out first thing in the morning and I’m very encouraged to see that it’s very active with people taking exercise.

We want the national federations to continue with their efforts to try to rally their members and the public to stay active as a way of keeping a positive frame of mind and generating hope of coming through this.

Do you think some federations will have an easier time transitioning to the new normal of safeguarding fans and players?

There are a few national federations which can transition easily because of the natural spacing in the sport — for example tennis, cycling, archery, taekwondo, sailing, triathlon and some of the track and field events — and others where it will be more challenging because of the distancing issue or communal use of equipment, like balls, bats and so on in sports such as football, rugby, softball/baseball, squash, basketball, volleyball, to name a few. We anticipate that these national federations will focus on strengthening and conditioning in preparation for a return to full sports.

How has the pandemic hindered sports in the territory?

Cancellation of all the local and regional leagues and events is a letdown and disappointment to athletes and fans and the good will that would have been generated from the anticipated success on the regional and international scene is also something that has to be understood as having an impact on morale and progress of all our athletes.

Have there been any silver linings or benefits to come out of this pandemic in regards to sports in the territory?

We have seen a greater working relationship with the Ministry of Health and the Ministry of Education and Culture which is evolving into a partnership to promote a more physically active society. We are also seeing a willingness on their part to collaborate with our LTAD programme, which already has the support of the Ministry of Education and Culture, which started implementing our physical literacy campaign in a selection of pre-primary and primary schools in the territory with a view to rolling it our nationally.

What advice would you offer to athletes during this time?

The following advice is for all levels of athletes and it is to stay focused, keep their eyes on the prize and know that we are here to support them in any way that we can. To our senior athletes, I encourage them not to lose faith and to continue to plan and train for success as best they can and to be reassured that we will continue to advocate for them in any way we can. The country needs them now more than before to lift up their spirits in a much greater way than after Hurricane Irma. The pandemic continues to take its toll not just at home, but globally. Perhaps the delayed Tokyo 2020 Games will prove to be the panacea for the soul when the Summer Olympics take place in the summer of 2021.