The Cabinet has approved certain aspects of an economic stimulus programme designed to help the territory weather the coronavirus pandemic, and full details will be disclosed soon, Premier Andrew Fahie …

END_OF_DOCUMENT_TOKEN_TO_BE_REPLACED 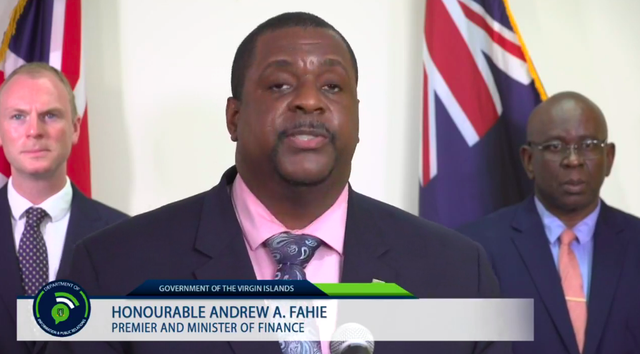 On Wednesday morning, Premier Andrew Fahie hinted at some of the details of a comprehensive economic stimulus plan for the territory and promised again to unveil the package soon. (Photo: PROVIDED)

The Cabinet has approved certain aspects of an economic stimulus programme designed to help the territory weather the coronavirus pandemic, and full details will be disclosed soon, Premier Andrew Fahie said Wednesday during an announcement livestreamed on Facebook.

“I know that many persons are waiting eagerly to hear about the economic response report: some would call it an economic stimulus plan,” he said. “I will be making a full statement on this as minister of finance shortly.”

After promising to provide enough information to “whet [residents’] appetites” for details about the plan that he has been pledging for weeks, Mr. Fahie stated that Cabinet approved a policy paper “which will serve as the interim framework to guide the government’s social, economic and fiscal response” to the territory’s needs during the pandemic.

He stressed the importance of transparency when spending funds from external sources, adding that all funds would go into the territory’s Consolidated Fund.

The government, he added, has asked permission from the United Kingdom to amend a 2012 fiscal agreement in order to help the government respond to catastrophic events.

Financial Secretary Glenroy Forbes, he said, has been tasked with leading technical discussions with a UK financial team in petitioning for changes in sections 25, 27 and 28 of the 2012 Protocols for Effective Financial Management.

Sections 25 and 27 of the agreement require the territory to obtain approval from the UK secretary of state for certain decisions, and section 28 states that breaching the protocols’ borrowing guidelines constitutes a breach of the agreement itself.

Mr. Forbes also has been charged with instructing ministries, departments, statutory boards and public corporations each to submit a bi-monthly report to the finance minister, according to Mr. Fahie.

The premier promised to disclose further details “soon,” but he did not provide a timeframe.

Mr. Fahie has said repeatedly in recent weeks that his government has been working on a comprehensive stimulus package. But he and the UK appear to disagree on what role Britain should play.

According to Mr. Fahie, he asked Governor Gus Jaspert last month if “for a certain time, [residents could] be paid at least minimum wage from a grant from the Unite Kingdom.”

“The objective is to ensure that the monies that come from the UK directly reach and touch and affect the lives of the people positively, and will not be lost through all kind of technical bureaucracy,” Mr. Fahie said.

In a March 30 statement, however, Mr. Jaspert pushed back. Though he did not provide an answer to the request, he suggested that Cabinet “set out, as a matter of priority, its plans to ensure that individuals and businesses receive the support they need.”

Though no comprehensive stimulus package has been unveiled, the government has announced a $2 million programme for farmers and fishers, and a month’s supply of free water for all residents.

Mr. Fahie has said the two initiatives were rolled out first because they were “clear-cut,” and he has begun describing them as part of a larger phased stimulus package.

While “no money is going to the hands of farmers” as the government plans to deal “directly with suppliers,” Dr. Wheatley said on Claude Skelton-Cline’s April 7 talk show that this is a time when “revenue is something we have to spend very carefully.”

He added that boosting the agriculture sector has always been a priority for the new administration.

“We had a real robust plan for agriculture that we were rolling out, but Covid-19 forced us to accelerate,” he said.

He referenced plans to have a statutory body handling commercial aspects of the industry, which would include helping farmers secure loans locally and abroad and supporting the production of certain crops.

The goal is to have the VI be as self-sustaining as possible in the event that countries whose exports the territory depends on, like the US, stop supplying.

Dr. Wheatley pointed out the recent seizure of shipments from the US to Caribbean nations and territories as an example.