Seated next to Premier Andrew Fahie during a surprise press conference at Village Cay, Alvera Maduro-Caines announced Monday afternoon that she had resigned from the National Democratic Party and will …

END_OF_DOCUMENT_TOKEN_TO_BE_REPLACED 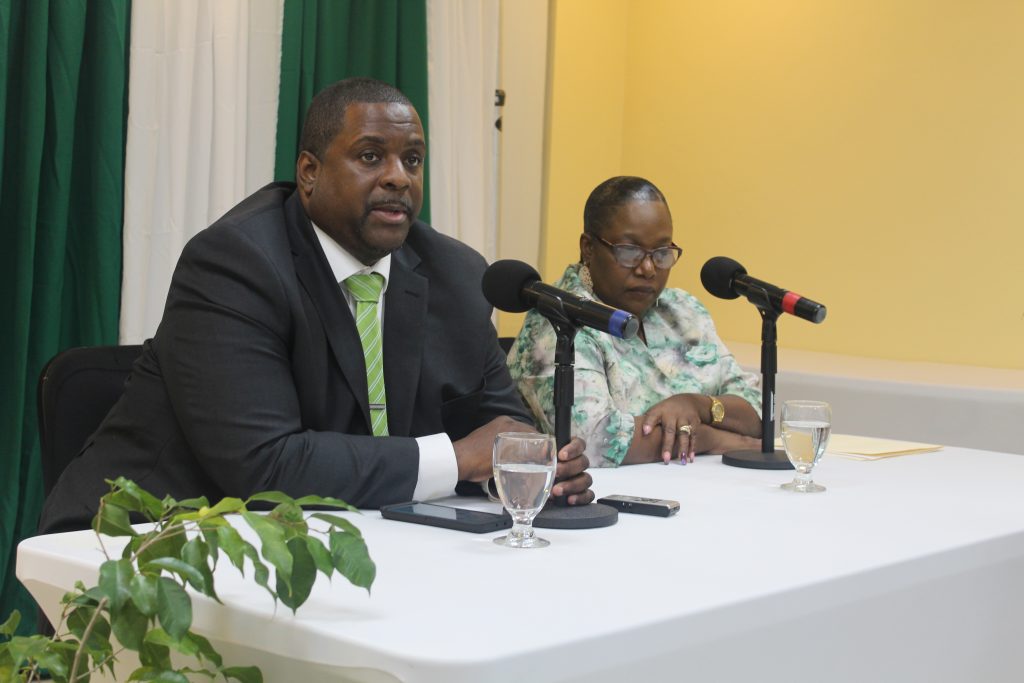 During a Monday press conference, Alvera Maduro-Caines announced that she had resigned from the National Democratic Party and joined the Virgin Islands Party, though she will not assume a ministerial role. She had not informed NDP members of this move in advance, and in a statement the party leader expressed his surprise and disappointment, though he ultimately wished Maduro-Caines well. (Photo: JOEY WALDINGER)

Seated next to Premier Andrew Fahie during a surprise press conference at Village Cay, Alvera Maduro-Caines announced Monday afternoon that she had resigned from the National Democratic Party and will join Mr. Fahie and the rest of his administration as a member of the Virgin Islands Party.

Ms. Maduro-Caines said she had contemplated the move for more than a month, and eventually decided to go through with it because the VIP’s vision for the territory better aligns with her own, and because she felt she would be able to accomplish more as a member of that party.

The new VIP member will not serve in a ministerial position, but will assist her new party in whatever capacity is most helpful, she said.

“Having considered the vision for the territory that has been laid out by the Honourable Premier Andrew A. Fahie in his 2020 budget address, I believe that this is a plan … deserving of the fullest support of all patriotic citizens,” Ms. Maduro-Caines said.

The decision — which Opposition Leader Marlon Penn said took his NDP by surprise — increased the VIP’s majority in the House of Assembly to nine and left the fractured opposition with four members: two in the NDP and two in splinter parties formed shortly before last year’s general election.

“I am truly disappointed that her decision was made without consultation with me or the party, and, moreover, that she has opted to join the [VIP] — both of which are at odds with the Alvera that I have come to know as a professional colleague and close friend over the past several years,” said Mr. Penn, who is also the NDP’s interim chairman.

Mr. Maduro-Caines, however, said her decision was borne purely out of a desire to improve the territory, not to curry political favours.

Before announcing her resignation from the NDP, Ms. Maduro-Caines said, she had first discussed the move with her family, who offered their love and support, as well as with some of her supporters in the Sixth District, who did not oppose the switch as they support her as a district representative, not as a member of a political party.

“Moving over to VIP does not change me: … I will still be the same Alvera Caines doing the work,” she said.

She had not, however, discussed her move with members of her former party, and though she had previously “voiced her opinions” to party members she had not given any indication she intended to join the VIP, she said.

Following the announcement, Mr. Penn released a statement explaining that Ms. Maduro-Caines informed him of her decision by a letter forwarded via WhatsApp, which he received 24 minutes before the start of her 3 p.m. press conference.

“Honourable Maduro-Caines’ resignation is regrettable, as she has always been a strong representation of the NDP’s core philosophy and values, where people and family are at the heart of who we are,” Mr. Penn stated.

Nonetheless, he ultimately offered Ms. Maduro-Caines good wishes and thanked her for her service to the party.

During the press conference, Mr. Fahie welcomed his new party member with open arms, and described her as courageous for not being restricted by party allegiances.

“I wish to thank Honourable Alvera Maduro-Caines for the confidence she has expressed in me as premier … and in our vision for the territory,” Mr. Fahie said, adding that she “did not switch for political mileage: She switched for [the] territory’s strength, and that’s important to do.”

Mr. Fahie and Ms. Maduro-Caines noted that her induction to the VIP brings the party’s total of female politicians to three, the most out of any of the territory’s current parties.

Though Ms. Maduro-Caines did not indicate that she would be focusing on a particular programme, she said she is interested in working on the government’s initiatives to bring medicinal marijuana to the territory and to spur entrepreneurship.

“I simply want that which is best for the territory: … the betterment and security of these islands,” she said.

Ms. Maduro-Caines has served as Sixth District representative since 2011, when she was first elected to office. She spent most of her first two terms as a backbencher under the NDP government that held power from 2011 until last February, but she briefly served as junior minister of trade, investment promotion and consumer affairs in 2018 and early 2019 before the NDP lost power to the VIP in the February election.